The Tree That Owns Itself

In Athens, Georgia lies one of the most famous trees in the world, the Tree that Owns Itself. With what started as one man's love and appreciation of nature, blossomed into a tree that is not only loved by locals, but people all across the world. Although the original tree was struck down by a thunderstorm, a tree that was planted with acorns from the original tree still stands in the same spot. The tree is now cared for by the Junior Ladies Garden Club.

Is it a picture of one of the plaques that surrounds The Tree That Owns Itself. 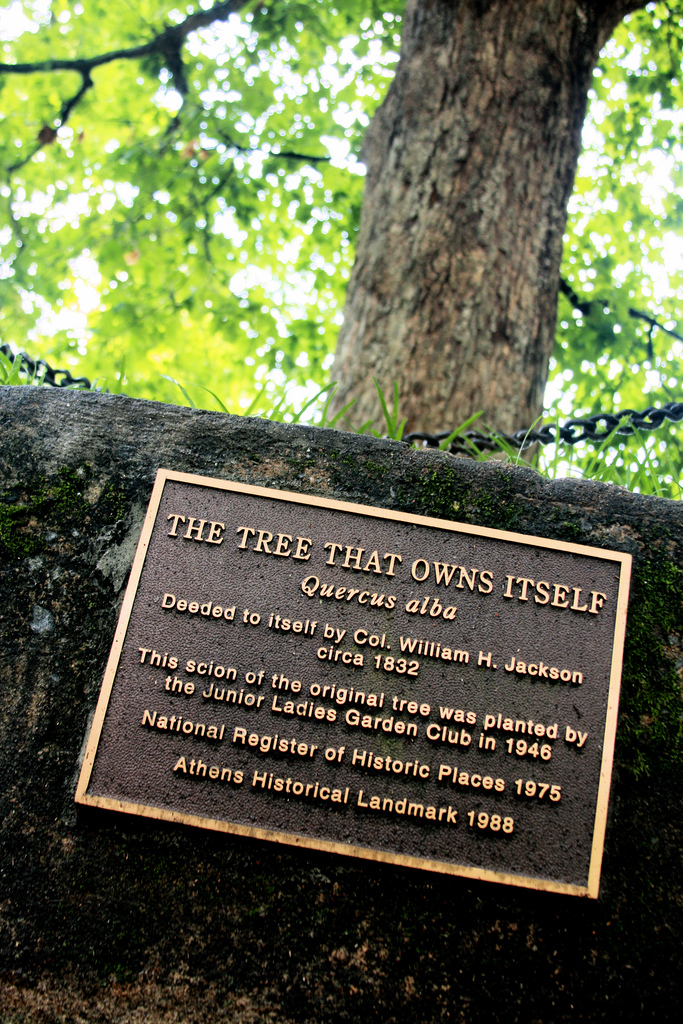 There are two tablets placed around The Tree That Owns Itself, one older and one considerably newer, and they both have the deed inscribed in them. 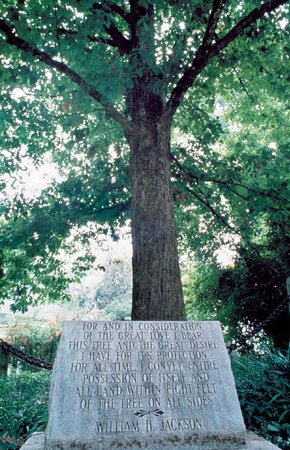 This is an original photo of the 1st Tree That Owned Itself. 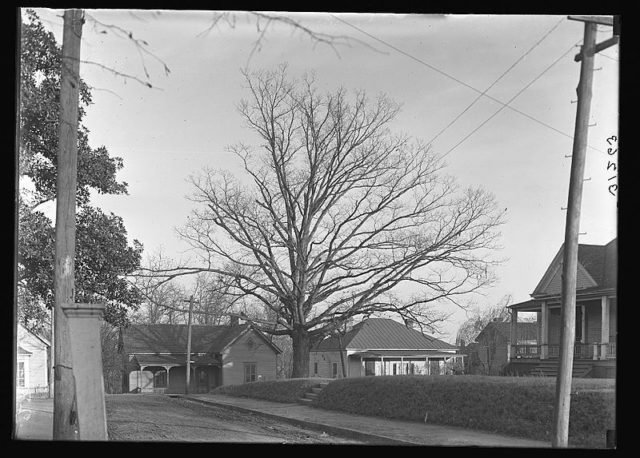 Near downtown Athens, Georgia, on the corner of South Finley Street and Dearings Street, lies one of the most famous trees in the world, the Son of Tree that Owns Itself, also known as Jackson Oak or simply the Tree that Owns Itself. The story of the Tree that Owns itself begins with the childhood of Colonel William Henry Jackson, a Congressman and Chief Justice of the Supreme Court of Georgia. Jackson grew up with the tree on the corner of his family’s property.  As he aged, the love for this tree grow. He decided he wanted to protect this tree for “all of time,” so he made a deed around 1820-1832 as a way to legally protect it beyond his own life. The deed which declared that the tree owned the property around its base, as well as its own self. Regardless of the tenuous legal validity of this deed, the story became a local legend and inspired tree lovers around the world.

The 350-year-old tree survived until 1942 when it was struck down during a thunderstorm. By this time, the Tree Who Owns himself was already a local landmark. Four years later, the Junior Ladies Garden Club planted a new tree in on the same corner. The club took some of the original tree's acorns to plant the new tree. The Junior Ladies Garden Club now cares for the new tree, the Son of the Tree that Owns Itself.  As the nation endured the most destructive war in world history, local residents of Athens celebrated the growth of a tree and the hope it represented in a time of war. Locals to this day throw the tree birthday parties and decorate it for various holidays, such as Christmas. On every Arbor Day, local schools plant seedlings from the tree around the community.

The story of the Tree That Owns Itself is very widely known and is almost always presented as fact. However, only one person, the anonymous author of "Deeded to Itself", has ever claimed to have seen Jackson’s deed to the tree. Most writers acknowledge that the deed is lost or no longer exists if it even existed at all. Such a deed, even if it did exist, would have no legal standing. Under common law, the person receiving the property in question must have the legal authority to receive it, and the property must be delivered to and accepted by the recipient. All and all, no one in Athens cares about the legal aspect of the tree owning itself. The people have a great appreciation for the tree and respect the tree and the land the tree owns.

Harvey, Ian. Strange but True: “The tree that owns itself” is a white oak in Athens, GA, which is widely assumed to legally own itself and the eight feet of land surrounding it. The Vintage News. February 26, 2018. Accessed November 04, 2018. https://www.thevintagenews.com/2018/02/26/tree-that-owns-itself/.