The First Church in Salem was founded in 1634 by Puritan settlers of the Massachusetts Bay Colony, making it one of the oldest churches founded in North America. It is also the first to be governed by congregational polity. In 1692, the meetinghouse of the First Church was involved in the Salem witch trials. During that time period, religion was a major part of the town’s life. Most sermons took place at the meetinghouse, and the few celebrations that were permitted were centered there. This led to much of the hysteria surrounding the trials.

Plaque from the First Meeting House in Salem 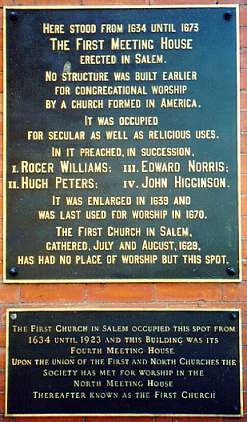 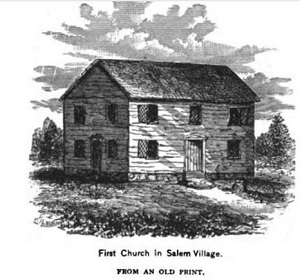 On April 11, 1692, the meetinghouse of the First Church in Salem was used for the examination of Sarah Cloyce and John and Elizabeth Proctor. On the day of her trial, Bridget Bishop’s specter allegedly pried up a plank from the meetinghouse and sent it crashing about the interior. Giles Corey and Rebecca Nurse were full members of the First Church, but were publically excommunicated from the Church and executed. Their memberships were reinstated in 1992 during the Tercentennial observance of the witch trials, and the Salem Witch Trials Memorial was erected.

Also connected with the Salem witch trials of 1692 was Reverend Nicholas Noyes, the junior minister of the First Church. He was an active persecutor of the accused witches in the examinations and officiated at the hangings of those accused of witchcraft.

The Crucible, a play by Arthur Miller, is a dramatization and partially fictional story of the Salem witch trials and an allegory of McCarthyism. It depicts the story of the start of the witch trials, beginning with the accusations against the alleged witches including Tituba, Elizabeth Proctor, and Rebecca Nurse and follows the trials of John and Elizabeth Proctor, which took place at the meetinghouse. The play is based on true events from the Salem witch trials, but has many historical inaccuracies (a list of these inaccuracies is linked below). It does, however, show the panic and hysteria of Salem during the trials and allows Miller to parallel the witch trials and the McCarthy trials.