The historical marker reminisces about a brutal crime that happened in 1921 and the criminals eventual capture. A guy was shot because he was mistaken for a state sheriff. The marker is located in Sussex County. The marker was made to remember the lives lost during that time period. 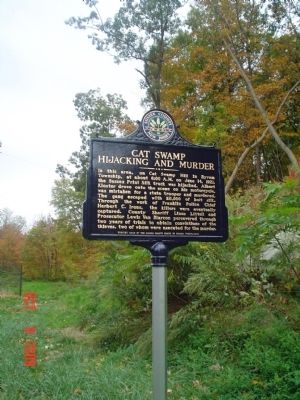 Newspaper accounts of this robbery and murder explain that "as Claude Resh and Charles Maines were slowly winding their way up the mountain near Cat Swamp in the heavily laden Bentley motor truck of the Sussex Print Works, in Newton, they were suddenly confronted by six highwaymen, masked and armed to the teeth. The appearance of the thugs was so sudden that the occupants of the truck had no time to use the guns with which they were provided for emergencies of this character."

The two men were marched into the mountain, bound up and robbed of their money. It took them several hours before they could release themselves and walk to Andover for assistance.

In the interim, the thugs drove the truck away. Albert Kloster, riding a motorcycle to work, was shot and cast into a swamp with his head buried deep in the mud. His body was discovered later that day by a force of highway workmen.

It involved time, perseverance, drama and a dramatic shootout between Irons and a gang member, but eventually the murder and the theft of 137 pieces of silk and 15 copper rollers was solved.

When the trials were over, Antonio Laturco, a.k.a. Tony Turko, and a man identified only as Carlino were electrocuted in Trenton while other gang members received various sentences. Four of the men were sentenced to life imprisonment that was later revised to 20-30 years of hard labor. Two were found guilty of receiving stolen goods and were sentenced to three years in prison, and two were sentenced to six months in the county jail while others involved had all charges dropped.

The newspaper accounts suggest Kloster was shot, as it was feared he would be able to identify them. Dobson, however, notes back then it was unusual for a man to ride a motorcycle to work as it was mostly state troopers who rode motorcycles, so the gangsters may have presumed Kloster was a state police officer


Inscription on marker: "In this area, on Cat Swamp Hill in Byram Township, at about 6:00 a.m. on June 14, 1921, the Sussex Print Silk truck was hijacked. Albert Koster drove onto the scene on his motorcycle, was mistaken for a state trooper, and murdered. The gang escaped with $11,000 of bolt silk. Through the work of Franklin Police Chief Herbert C. Irons, the killers were eventually captured. County Sheriff Linus Littell and Prosecutor Lewis Van Blarcon persevered through two years of trials to obtain convictions of the thieves, two of whom were executed for the murder"