Astronomer Leslie C. Peltier discovered a dozen comets and was the first to design a rotating observatory--an innovation that allowed his fellow astronomers to observe stars throughout the night sky. Peltier was born on January 2nd, 1900. As a young boy, he exhibited tremendous interest in stars. At the age of 16, Leslie and his father agreed to terms whereby the boy could earn extra money by finishing additional chores on the family farm. After picking 900 quarts of strawberries, Peltier had earned $18-the amount he needed to purchase his first telescope. For the next 64 years, he logged over a hundred thousand observations and worked to advance the field of astronomy. 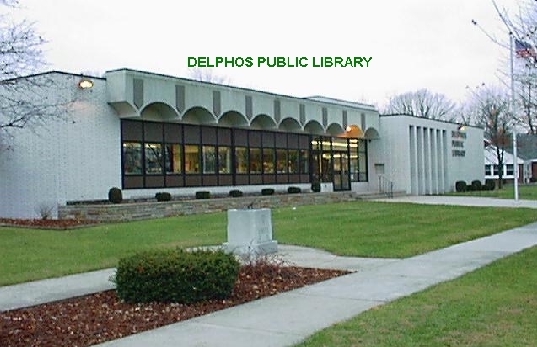 This sundial honors Leslie Peltier and can be found outside the Delphos Library. 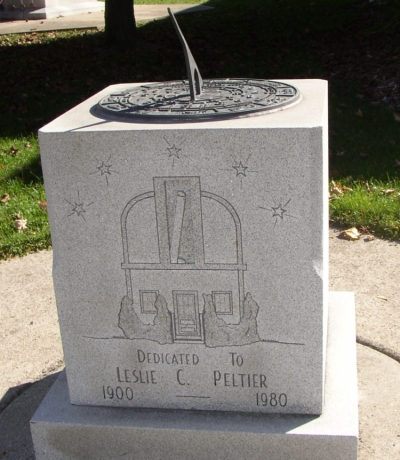 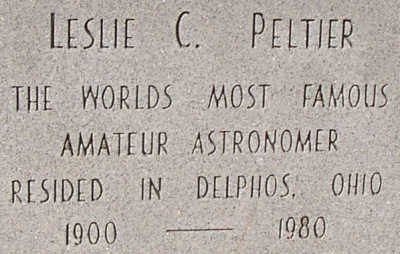 Peltier was raised on a small farm in Delphos, surrounded by forests and bordered by the Auglaize River. With just a tenth grade education, he became known as the world’s greatest non-professional astronomer. Peltier joined the American Association of Variable Star Observers (AAVSO), an amateur astronomy group. From the age of 18 until his death at 80, Leslie Peltier never missed sending in a monthly report to the AAVSO.

Peltier mad many of his first observations with a borrowed 4-inch telescope from his father's farm.  By 1921 his father helped him acquire a 6-inch telescope on loan from Princeton University. In 1925, this telescope revealed something among the stars. After a week of research at Harvard College Observatory, Peltier confirmed that he had discovered a new comet.

In 1937, Peltier designed and built his ground-breaking Merry-Go-Round observatory. This design marked the first time that an entire observatory rotated to follow the stars. During his lifetime Peltier discovered 11 more comets, two novae, and contributed over 132,000 observations to the AAVSO.

On November 25, 1933 Peltier married Dorothy Nihiser and they moved to his uncle’s house before moving to a small house in Delphos. He lived in Delphos until 1980, and was honored by his hometown with this memorial sun dial at the public library. In addition to his work as an amateur astronomer, Peltier served on the library board for more than 30 years.