The Santa Monica Pier has been a leading destination for tourists and local families since its first construction in 1909. The area has faced its share of difficulties from economic challenges to storms. In each instance, local residents and business leaders worked to revive or rebuild the pier, preserving what has become a national icon. One attraction on the pier, the carousel hippodrome, is a National Historic Landmark. The pier has been seen in many movies and TV shows. 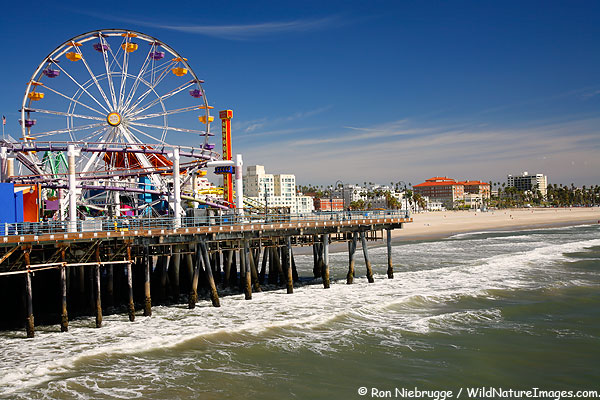 The Santa Monica Pier at night. 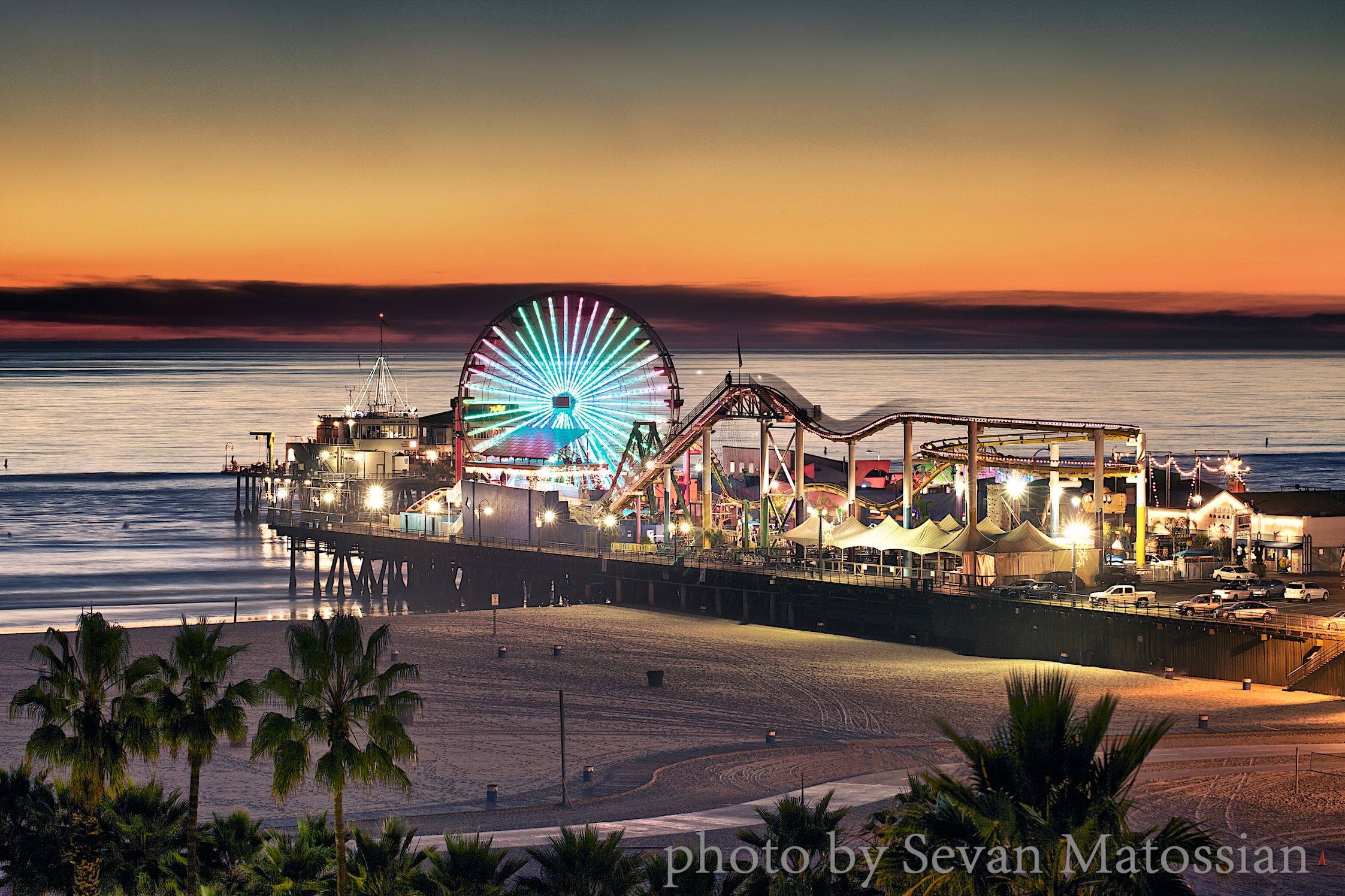 The pier was the first concrete pier to ever be created in the United states on the West Coast. On September 9, 1909 thousands of people would come to celebrate the opening of the pier. The US Navy Cruiser USS Albany would even make an appearance for opening day, which many people were excited to see. Opening day consisted of running, boating, and swimming competitions. George Freeth, a very famous surfer at the time, would help judge the competitions.  Interestingly enough, the pier, was originally built as sewage system for the city. The 1,600 foot long pier had a pipeline underneath. The pipeline was meant to run into the ocean as an exit for the sewage. Luckily, in 1920, the pipeline would no longer be in of service to do that.

Santa Monica pier became a "hot spot" for those who loved to fish and relax with friends. Many people started telling stories of what happened to them while fishing. A popular topic was a five-hundred pound fish many claimed to see in the water. Today, it is surmised that this fish was the Black Sea Bass, a fish commonly found in the Pacific Ocean waters. The new pier was expanded in 1915 when an amusement park was added on top. The purpose for the addition was to better compete with Venice Piers and Ocean Park.

A famous amusement park businessman and famous carousel carver, Charles Looff, was hired to transform the pier. He decided to build a whole new section in order to make room for the new amusement park. On June 12, 1916, the new section of the pier opened to the public. The amusement park now included: a carousel with a row of horses, the Blue Streak Racer Roller Coaster, a place for bowling, and a fun house. The pier soon became a top attraction in the city and even started to include live music to entertain the crowds.

On April 17, 1919, the pier collapsed due to rust on the bottom. It would take two years to restore the pier, this time with new, sturdier wooden piles. Eventually the concrete deck was converted to wood. The Santa Monica Amusement Company bought the company, upgraded the roller coaster and began a new project: creating the largest ballroom in the world, fittingly called the "La Monica Ballroom." It opened on July 23, 1924, with over 50,000 in attendance. The ballroom contained hard maple flooring and had a "submarine garden" interior. It was very popular, as people from all over came to dance in it. Unfortunately, the ballroom would be short lived due to the affects of the Great Depression and in the mid-1930s the ballroom became a lifeguard station, a convention center, and even—for a short period of time—served as the city jail.

After the Great Depression, a special boat dock was built as well as a bridge leading to the walkway of the pier. The blue sign over the bridge became an international icon. When World War II broke out, the pier, along with many other harbors on the Southern West Coast, served as a dock for war ships.

A man by the name of Venice Banker Walter Newcomb bought the pier. He hoped to restore it to it's amusement park days, once the war had ended. However, after replacing the carousel in 1947, Newcomb died a year later. His wife, Endid, took over the business and ran the pier for the next twenty-six years. However, the pier gradually deteriorated and a big problem for the city. The city council voted to destroy the pier in 1973, however citizens demanded it be saved, claiming that it is important and needed to repaired. This prompted the legislation of the law, 'Proposition 1," which states that the pier will be preserved in perpetuity.

On January 27, 1983, a large storm that hit the West Coast destroyed the pier. In March the pier was set for repairs when an even bigger storm hit, destroying it further. The storm was actually considered the best thing to happen because now the pier could be completely restored. In 1987 construction to repair the pier started, which included a new amusement park called Pacific Park. The work on the pier was completed in 1990 and Pacific Park was completed six years later.

The Pier is always open, but the businesses have their own separate hours.