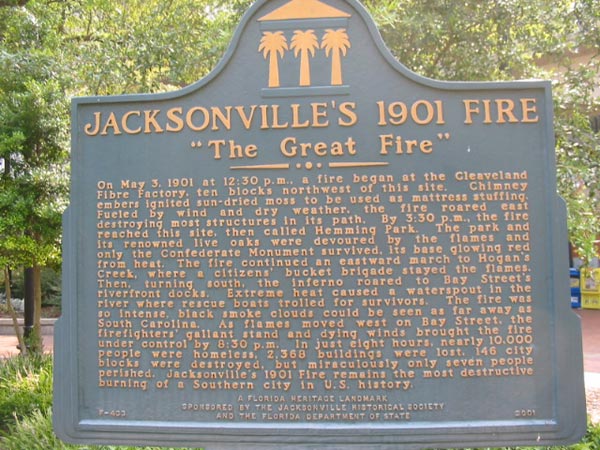 An image of the fire as it destroyed homes in Jacksonville. 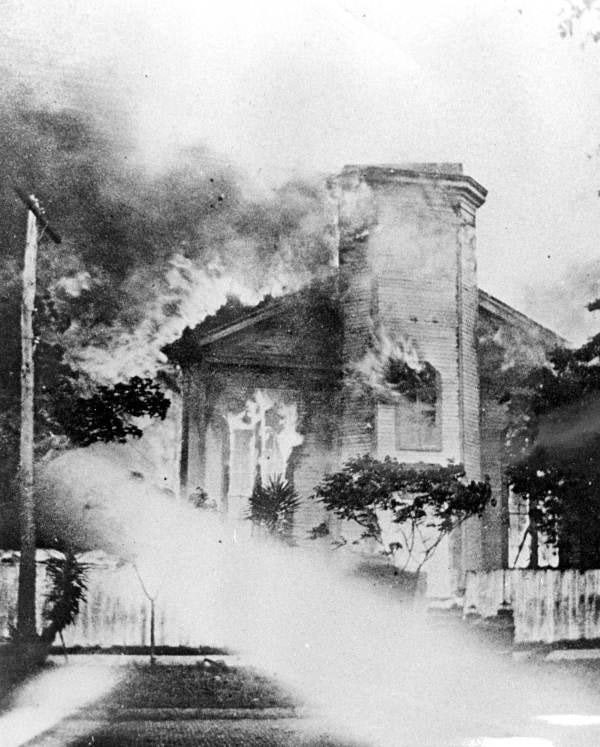 Looking across at the fire. 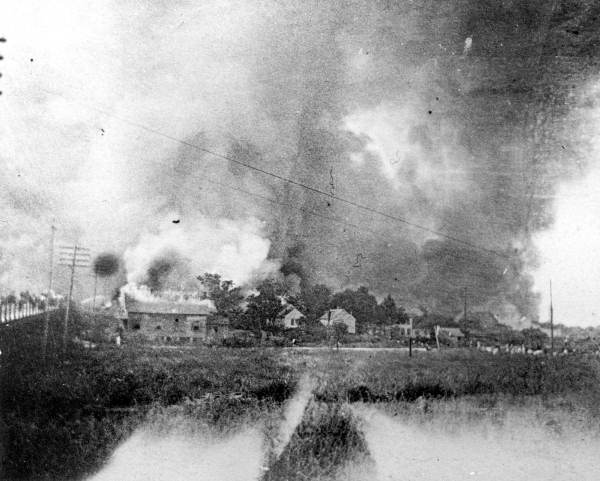 Around noon on Friday, May 3, 1901 a spark from a kitchen fire during the lunch hour at a mattress factory set mattresses filled with Spanish moss on fire at the factory located in an area now known as LaVilla. Fueled by wind and dry weather, the fire roared east destroying most structures in its path.The fire was soon discovered and it was thought they could put it out with only a few buckets of water. Consequently an alarm was not turned on until it had gone beyond their control. Located at Davis and Beaver streets, the factory fire soon spread to most of the downtown area. Smoke could be seen as far north as Savannah, Georgia

When the fire department arrived, the fire had spread from the outside platform upon which it started, to the pine buildings, which rapidly became a seething mass. Then the breeze sprang up, and the resinous brands and millions of sparks were dropped on the roofs of nearby homes, every few minutes starting a new distributing center and rapidly creating a chaos of fire and smoke. Rapidly it made its way eastward, devouring everything combustible in its path.

The fire swept through 146 city blocks, destroyed over 2,000 buildings and left almost 10,000 people homeless all in the course of eight hours. It is said the glow from the flames could be seen in Savannah, Georgia; smoke plumes in Raleigh, North Carolina.

Florida Governor William S. Jennings declared a state of martial law in Jacksonville and dispatched several state militia units to help. Reconstruction started immediately, and the city was returned to civil authority on May 17. Despite the widespread damage, only seven deaths were reported.

The marker is in Hemming Park after the fire because the Confederate monument was one of the few structures to survive.  Many witnesses claim that the base had a red glow during the fire.

The Great Fire was the most destructive event in Jacksonville’s history, wiping out 2,368 buildings while leaving nearly 10,000 people homeless and destroying the majority of Downtown Jacksonville. It was the largest metropolitan fire to have occurred in the South, before or since. This momentous event triggered an unprecedented rebuilding effort that laid the foundation for modern Jacksonville.

New York City architect Henry John Klutho helped rebuild the city. He and other architects, enamored by the "Prairie Style" of architecture then being popularized by architect Frank Lloyd Wright in Chicago and other Midwestern cities, designed exuberant local buildings with a Florida flair. While many of Klutho's buildings were demolished by the 1980s, several of his creations remain, including the St. James Building.

Jacksonville has one of the largest collections of Prairie Style buildings outside the Midwest.