Built in 1849, The Petersen House is best known as “The House Where Abraham Lincoln Died.” The property is a National Historic Site and part of the Ford’s Theatre complex. After being mortally wounded, President Lincoln was moved from Ford’s Theatre across the street to this historic home where he died the next morning on April 15, 1865.

Lincoln marker on the Petersen House, "The House Where Lincoln Died." 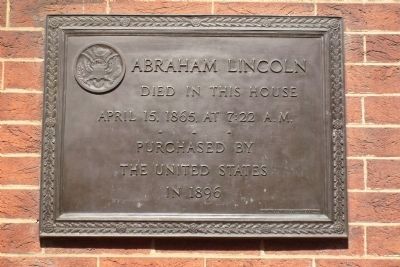 Front View of the Petersen House from across the street, near Ford's Theatre. Lincoln was removed from Ford's Theatre and taken to the nearest place for medical care. Doctor's tried to treat Lincoln's wound but could do nothing. 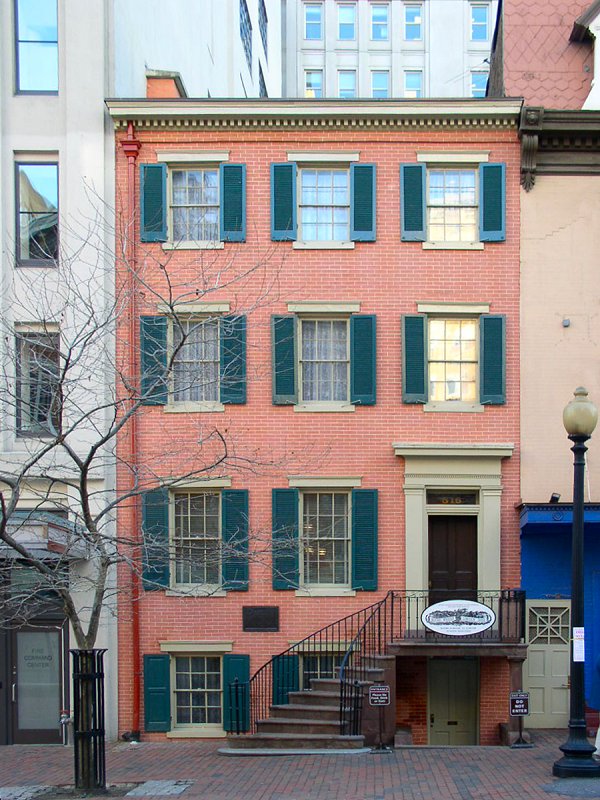 The Petersen House was built in 1849 for the family of German immigrant and tailor William A. Peterson, his German-born wife, Anna, and their ten children. While built as a private family home, the extra rooms in the house were rented out for boarding, and the home once held as many as twenty-one people. During the Civil War, Petersen used his skills to tailor uniforms for Union officers. His home became the center of the nation's attention when the President of the United States was moved to his home following Booth's assassination attempt.

John Wilkes Booth hoped his actions might revive the Confederate cause against the United States. Booth's plans originally included killing the President along with Vice President Andrew Johnson and Secretary of State William H. Seaward as part of this goal. On April 14, 1865, President Abraham Lincoln was attending the nearby Ford’s Theatre where he was greeted by 1,700 attendees. Lincoln and the audience were watching a play known as Our American Cousin, a show featuring an American named Asa Trenchard and his journey back to Europe to claim his family’s estate.

John Wilkes Booth entered the theater and shot Lincoln in the back of the head. Believing Lincoln would not survive a trip back to the White House, and not wanting the president to die in a theater box, Dr. Charles Augustus Leale and other patrons carried the president’s body to the nearby Peterson House where Lincoln would undergo treatment. Visitors came and went all night to see the beloved leader. Some were Cabinet members, generals, congressmen, and also Vice President Andrew Johnson. As feared by his doctors, Lincoln never gained consciousness and his breathing and blood pressure declined throughout the night. Abraham Lincoln, America’s 16th President, died at 7:22 a.m. on April 15. A doctor placed silver half-dollars on Lincoln’s eyelids and a pastor said a prayer for those in the room. At that moment, Lincoln became the first U.S. President to ever be assassinated. More importantly, the death of Lincoln meant that Southern apologist Andrew Johnson would replace Lincoln as the 17th U.S. President. After Johnson pursued a policy known as Presidential Reconstruction that ended slavery but otherwise sought a return to the status quo in the South, Northern political leaders in the House and Senate passed a series of laws and supported constitutional amendments that extended suffrage to African American men and reversed Southern state laws known as the Black Codes that limited the freedoms of African Americans and had been passed during Presidential Reconstruction.

William Petersen was absent during the president’s vigil and returned to find his house overrun by souvenir hunters. Angry at the trespassers, but seeing an opportunity, Petersen began charging admission to those who wanted to visit the home. One of Peterson's sons cut the president’s shirt, towels, and sheets into pieces and sold them as souvenirs. Soon, hundreds of people were arriving daily to see the room of Peterson's boarder William Clark. The Petersen House was not alone in being swarmed by souvenir hunters, and some even tore pieces of fabric or wallpaper from Ford’s Theatre. The Petersens continued to live in the house and rent rooms up until their deaths in 1871. In 1878, the building was bought by attorney Louis Schade, but the growing number of unwelcome visitors grew tiresome for him and he leased the house to the Memorial Association of D.C. in 1896.

The memorial group gave permission to Osborn Oldroyd, a Civil War veteran and Lincoln collector, to operate a Lincoln museum in the Peterson home until he died in 1930. Notable artifacts that were on display in the home at that time include the Lincoln Family bible, Lincoln’s White House chair, and an alleged log from the Lincoln childhood home. In 1926, Oldroyd’s collection was purchased by the government and many items were moved next door to the museum inside Ford’s Theatre. From 1932 to 1959, five women’s patriotic organizations and the U.S. Department of the Interior worked to renovate the Peterson House to its 1865 appearance. In 2007, the building was purchased by the Ford’s Theatre Society.