Since 2002, the Hammer Museum has shared the interesting history of the tool that bears its name. This volunteer-operated museum began with museum founder Dave Pahl's collection of unique and historic hammers. 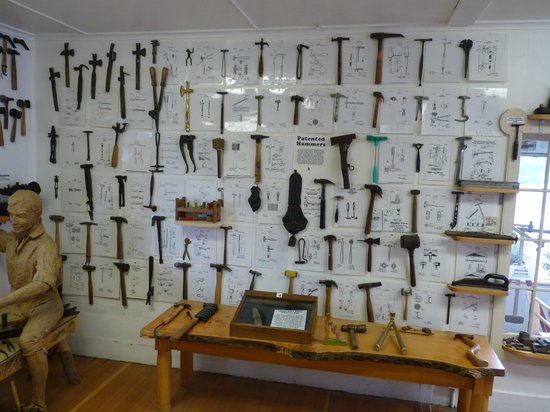 The Hammer Museum officially opened in 2002, but the founder had been collecting hammers years before. The founder Dave Pahl, dreamed of living a very pioneer lifestyle which took him to Alaska. While there, he met and married Carol, and together they won a five acre homestead. In 1981, He and his wife moved to the land and lived a rugged life without electricity, and running water. When he took a rare trip to the "48 states", he visited an antiques shop and decided that he needed to create a Hammer Museum.

When he and his wife bought the building that currently houses the museum, they decided to add-in a basement. During the renovation project, Dave made an ancient Native American's hammer. This discovery solidified to Dave that he was doing the right thing by preserving the hammer's history.
The museum has received donations from both the Smithsonian and the State of Alaska. In 2004 the museum became non-profit. They also run an internship to help interns.

The hammer museum is the first of its kind in the world, according to the museum's website. It currently has five exhibits. They are all of course on the hammer but each detail something different. The exhibits are: Spring Loaded Meat Tenderizer, Hammer Sculptures, 5 Ways to Not Hit Your Fingers, Handle Making Machinery, and History of Hickory Handle Making.