The Reynolda House Museum of American Art is affiliated with Wake Forrest University. This affiliation allows for students of the university unique educational experiences at the museum, as well as opportunities to enjoy the cultural institution that is the Reynolda House. The museum is accredited by the American Alliance of Museums. 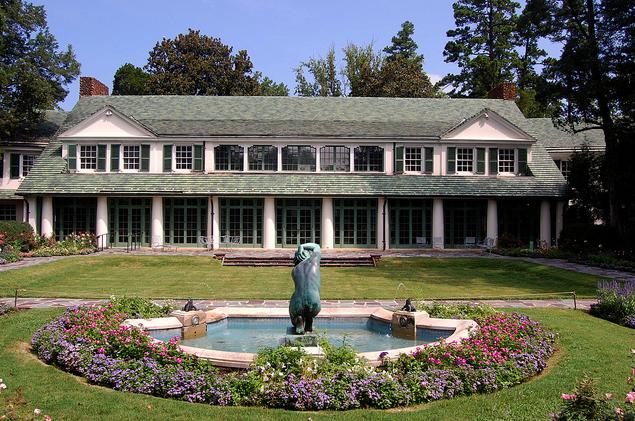 The history of the Reynolda House Museum of American Art begins with Richard Joshua Reynolds, Katherine Smith Reynolds, and there family. Richard Joshua Reynolds was extremely successful as the founder of a tobacco company. His company was established in 1875 in North Carolina. The sale that made him the excessively wealthy man that he was-was the sale of Prince Albert Tobacco and Camel cigarettes.

After Reynolds acquired his wealth, he married Katharine Smith. Smith also shared in her husbands self-motivation. She worked with an architect to design a second estate for her family that was located outside of the city of Winston. The home that they created had sixty rooms, gardens, a lake, school, innovative farm, and a workers' village.

The family moved into the Reynolda house in 1917. After Katherine's death in 1924, her children continued to operate the property. The last members of the Reynolds family to live on the estate was Katherine's daughter, Mary Reynolds Babcock, R.J. and her husband, Charlie Babcock.The two left the house in 1948.

The Reynolda House became a non-profit institution in 1965 after it was donated by Charlie Babcock. It became a museum that focused on arts and education. The museum offers the public the opportunities to view exhibitions of their collection of incredible American Art.