Established in 1950, Tri-State Airport has served as the commercial airport for Huntington and surrounding communities. Commercial aviation in Huntington dates back to the 1920s when the Chamber of Commerce worked to create a location to serve charter flights. Regular air service via commercially-scheduled flights was rare, but the area was served by the Lawrence County airstrip from 1929 until the completion of Tri-State airport. The airport is best known for the tragic accident that occurred near the airport in 1970 when members of the Marshall University football team and their supporters perished as their plane crashed just short of the airport. Today the airport is utilized by two carriers, Allegiant Air and American Airlines, and offers flights to Florida, Myrtle Beach, and Charlotte, North Carolina. The two companies operate their flights to Tri-State airport utilizing Bombardier CRJ900, Embraer ERJ145 aircraft, and Airbus A319 aircraft. 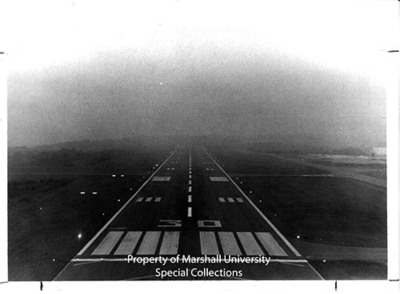 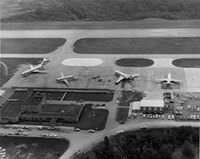 Panoramic of terminal under construction 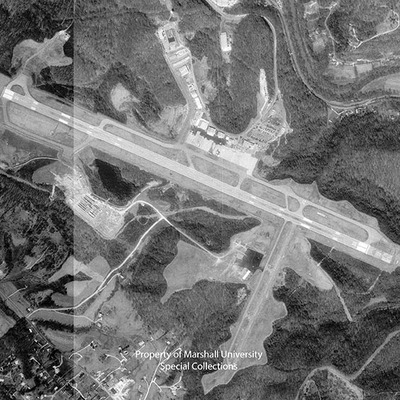 Tri-State Airport was built from 1950 to 1951. Conversations about civil aviation date back to December 8th, 1922, when the Huntington Chamber of Commerce created the first Committee for Aviation to locate space for the first airfield in the area. 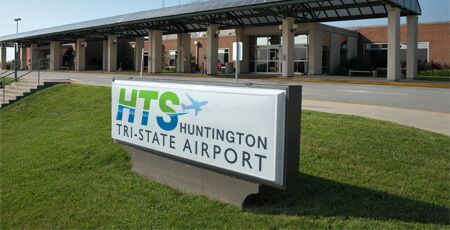 Recognizing the potential of a commercial airport, the local Chamber of Commerce established an Aviation Committee in 1922. The committee acquired property at Kyle Landing and built an airstrip that could support charter flights. Although ambitious, the city could not yet support regular air service and Kyle Field stopped operations in 1927.

In 1929, the Embry-Riddle Company of Cincinnati, then a subsidiary of American Airlines, correlated with the Huntington Chamber of Commerce Aviation Committee. Due to the lack of undeveloped flat land in Huntington, the company decided to build an airport by the Ohio River in Portsmouth, Ohio. Before construction, the Embry-Riddle Company asked each of the surrounding cities to pledge that they would not build a competing airport. Huntington declined this pledge, but the company proceeded to build the airport anyway. This small airport featured a grass landing strip, and is now the Lawrence County Airpark.

As Huntington grew during World War II and the postwar boom that created many jobs throughout the coal fields, the Aviation Committee went back to work. The committee selected a location for the Tri-State Airport about nine miles south of Huntington in Wayne County, West Virginia. In 1948, the Aviation Committee and four other organizations combined to make the Tri-State Airport Authority, which would be in charge of building and maintaining the airport. After overcoming funding problems, an initial 534 acres were purchased and the design was made. With the construction contract signed on March 7, 1950, the dream of the Huntington Tri-State airport was in site and construction of the airport was completed on November 2, 1951.

The facility is known for a fatal crash which occurred near the airport on November the 14th 1970. On that evening a charter flight operated by Southern Airlines with a McDonnell Douglas DC-9 for the Marshall football team and its supporters crashed near the airport. This flight was originally planned to be canceled as the overall weight of the aircraft exceeded its take-off maximum load. Eventually the flight was not cancelled as effort to light up the personal belongings were made. In addition to bad weather (rain, fog, smoke and ragged ceiling), the aircraft's final approach went wrong as it kept descending instead of maintaining the required altitude of 1240 feet. The reasons remain unknown but it led to the worst sport-related accident of U.S. history.

Safety was the focus for all the improvements after the Marshall University plane crash in 1970. One of the biggest expansion projects was in 1973, which added 115 acres to the airport's property. To extend the level surface, four million cubic yards of dirt had to be moved to fill in the ravines. The dirt was taken from a mound of dirt near the other end of the runway which is now where the secondary runway is located. Visual Approach Slope Indicator Lights were also installed to improve the visibility during night landings.