Early Montpelier was well known for its pine trees placed down the center of Washington Street. As U.S. Highway 89 became more popular to the traveling public, the trees were finally cut down amid much discussion throughout the town. This building was built for Joseph C. Rich, grandson of Charles C. Rich, the Mormon pioneer. The brick construction was done by the Tueller brothers - Jacob, Jacob Jr., John and Christian from Paris who learned their trade in Switzerland. Joseph was the first manager of the Montpelier branch of the Studebaker Car Dealership with the main office being in Ogden, Utah. In 1914, he went independent and started the J.C. Rich Motor Company. He sold Pontiac, Chevrolet, and Cadillac automobiles. This was one of the oldest automobile agencies in the state of Idaho. 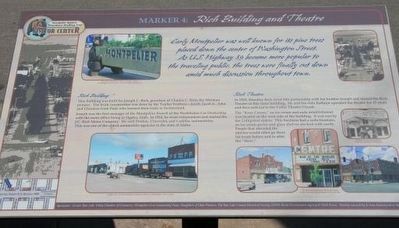 Rich Building and Theatre across the street from the marker 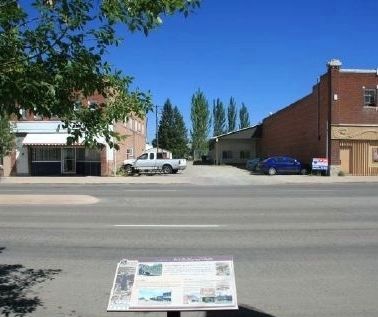 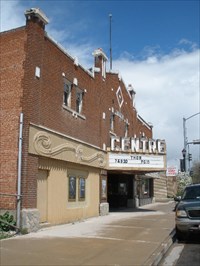 In 1923, Standlwey Rich went into partnership with his brother Joseph and started the Rich Theater in this same building. He and his wife Kathryn operated the theater for 25 years and then sold out to the Voller Theater Circuit.

The "Kozy Corner," an ice cream and soda establishment was located on the west side of the building. It was run by the Collipriest sisters. This business had a soda fountain, an ice cream parlor and glass shelves stocked with candy. People that attended the movies would often go there for treats before and or after the "show."

Sent by Brigham Young, Mormon settlers began to arrive in the Bear Lake Valley in late
September of 1863 under the direction of colonizer and Mormon Apostle Charles C. Rich.
On the following spring of 1864, John Cozzens led a group of sixteen families to settle the
area known as Montpelier today. First known by travelers along the Oregon Trail as
"Clover Creek", the town name later changed to "Montpelier" by Brigham Young after
the capitol of his native state of Vermont.

The town business districts blossomed thanks to emigrants passing through on the
Oregon Trail. The Bear Lake valley became a welcome rest area along the Oregon Trail
to replenish supplies with fresh produce, daily products and beef.

With the arrival of the railroad in 1892, the first significant number of non-Mormon
residents arrived and soon the settlement grew into separate communities- "Uptown
(Mormon) Montpelier" and "Downtown (Gentile) Montpelier". The town became the
home terminal for the Union Pacific/Oregon Short Line trains until October 1972 when the terminal was moved to Pocatello. Largely due to the arrival of the railroad, the community became the largest in the Bear Lake valley and by 1900 most of the businesses of the valley were located in Montpelier.

Montpelier continues to be the center of commerce of the valley with a population near
3,000. Agriculture continues to be an important way of life in the valley with farmers
and ranchers raising grains and cattle. Tourism has fast become a strong industry in
Montpelier due to the city's location to scenic Bear Lake to the south and its location
on US Highway 89 half way between Salt Lake City, Utah and Jackson Hole, Wyoming,
the gateway to Yellowstone National Park.

Open all year round