During the Holodomor, which is also known as the "Terror-Famine in Ukraine" and "Famine-Genocide in Ukraine," millions of ethnic Ukrainians died of starvation in a peacetime catastrophe that was caused by the inaction of Joseph Stalin, who defied those who predicted the catastrophe. In fact, recent work by scholars demonstrate that Stalin not only failed to support prevention measures or aid, but actively redirected government resources to preventing ethnic Ukrainians from escaping the afflicted areas. Since 2006, the Holodomor has been recognized by the independent Ukraine and many other countries as a genocide of the Ukrainian people carried out by the Soviet Union. Estimates of the death toll by scholars and government officials vary greatly, and it is not uncommon to see statistical estimates that range from million victims to as many as 12 million. The famine was not the result of natural factors, but rather the result of human actions that caused millions of ethnic Ukrainians to perish. Recent research has since narrowed the most commonly-accepted estimates to between 2.4 and 7.5 million victims. The exact number of deaths is hard to determine, due not only to a lack of records, but also owing to the efforts of Russian officials to disrupt the efforts of journalists and those who attempted to record information about the victims. These estimates increase significantly when the deaths inside heavily Ukrainian-populated Kuban are included. According to the Court of Appeal of Kiev in 2010, the demographic losses due to the famine amounted to 10 million, with 3.9 million direct famine deaths and a further 6.1 million who suffered birth defects and other significant ailments that led to the loss of life or significant impairments to a normal life.

The Famine-Genocide in Ukraine Marker. Scholars estimate that 40 million perished in famines in areas controlled by communist regimes in the Soviet Union, North Korea, China, and Cambodia during the 20th century 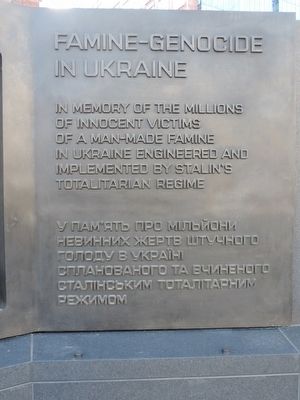 Signage on the Massachusetts Avenue side of the monument where visitors continue leaving flowers and icons in remembrance of those who died in the famine-genocides of the 1930s under Stalin. 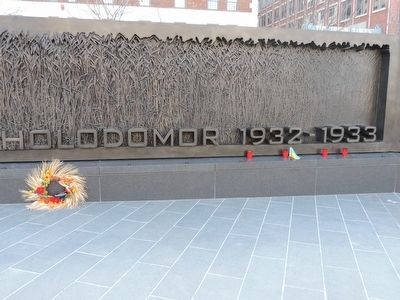 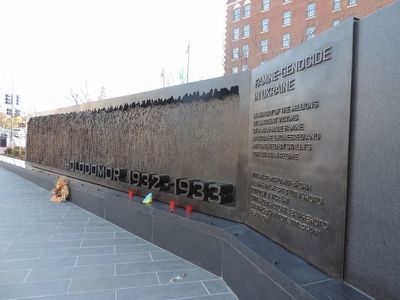 From the 1932 harvest, Soviet authorities were able to procure only 4.3 million tons of grain as compared with 7.2 million tons obtained from the 1931 harvest. Rations were drastically cut back and during the winter of 1932–33 and spring of 1933 people in many urban areas perished. Urban workers were supplied by a rationing system (and therefore could occasionally assist their starving relatives of the countryside), but rations were gradually cut; and by the spring of 1933, urban residents also faced starvation. At the same time, workers were shown agitprop movies, where all peasants were portrayed as counterrevolutionaries hiding grain and potatoes at a time when workers, who were constructing the "bright future" of socialism, were starving.

The first reports of mass malnutrition and deaths from starvation emerged from two urban areas. By mid-January 1933, there were reports about mass "difficulties" with food in urban areas, which had been under supplied through the rationing system, and reports that might have detailed the number of victims were suppressed and efforts were made to prevent people from fleeing the region. The tragedy was greatly exacerbated by Stalin's efforts to crush those who supported Ukrainian independence. While some of the causes of the famine were natural, the actions taken by Soviet leaders were not. "Food supply was not mismanaged by Utopian dreamers," explained Anne Applebaum, a Pulitzer Prize winning journalists who studied the the tragedy in Ukraine, "It was weaponised."