Designed by architect Stanford White and located in Fort Greene Park in Brooklyn, the Prison Ship Martyrs' Monument honors the more than 11,500 American soldiers, sailors, and civilians who died aboard British prison ships anchored in Wallabout Bay during the American Revolution. Dedicated on November 14, 1908, the monument consists of a 149-foot-tall freestanding Doric column topped with a bronze decorative lantern, designed by sculptor Adolph Alexander Weinman. The column stands on a plaza at the top of a one-hundred-foot-wide granite staircase. Perched on fluted shafts at the four corners of the plaza are four bronze eagles, also designed by Weinman. Beneath the monument lies a crypt, which holds the remains of the so-called prison ship martyrs. 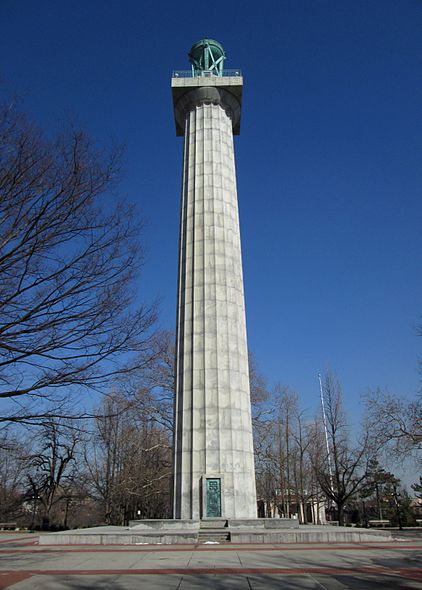 A close-up of the decorative lantern atop the monument 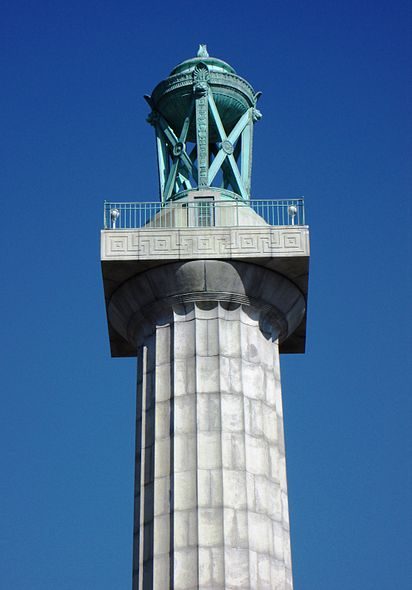 A photograph from the monument's dedication in 1908 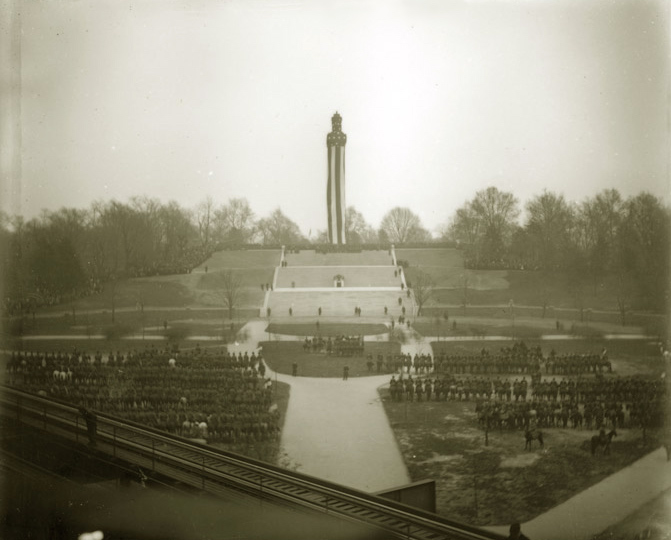 From their capture of New York in 1776 until the formal end of the war in 1783, British forces in New York used damaged or decommissioned warships anchored in Wallabout Bay to hold American prisoners. These included American troops captured on the battlefield, American privateers apprehended on the high seas, and civilians arrested for aiding and abetting the rebellion. In the crowded, damp, vermin-infested hulls of these vessels, American captives died in droves from disease and malnutrition. When prisoners died, the British either dumped their bodies overboard or buried them in shallow graves along the shore. The most infamous of these New York prison ships was the HMS Jersey, which American prisoners nicknamed “Hell.” During the war, over 11,500 Americans died aboard these floating prisons, more than the total number of Americans who died in battle during the conflict.

Beginning in the early nineteenth century, various groups worked to provide for not only the proper burial of the remains of the so-called prison ship martyrs, but also a suitable monument in their honor. In 1808, residents of Brooklyn buried the partial remains of some of the victims in a tomb on what is now Hudson Avenue, near the Brooklyn Navy Yard. Several decades later, in 1873, the remains were moved to Washington Park and placed in a brick vault. The City of Brooklyn established the park in the 1840s. The former site of Fort Putnam, which the British captured when they took New York in 1776, the park was redesigned in 1867 by renowned landscape architects Frederick Law Olmstead and Calvert Vaux, who also designed Central Park in Manhattan and Prospect Park in Brooklyn.

Near the end of the century, government officials, historical societies, and private citizens began calling for the creation of a new monument in Washington Park to honor the prison ship martyrs. In 1905, renowned architect Stanford White of the firm McKim, Mead, and White was commissioned to design the monument. Composed of a 149-foot-tall freestanding Doric column topped with a bronze decorative lantern designed by sculptor Adolph Alexander Weinman, the monument sits on a plaza at the top of a one-hundred-foot-wide granite staircase. Perched on fluted shafts at the four corners of the plaza are four bronze eagles, also designed by Weinman. Beneath the monument lies a crypt, which holds the remains of the prison ship martyrs. On November 14, 1908, the monument was dedicated and the park renamed Fort Greene Park. Among those in attendance at the dedication ceremony was President-elect William Howard Taft.

In the years since its dedication, the monument has undergone a number of alterations and renovations. In 1937, an elevator and stairs were installed inside the monument, but the New York City Department of Parks and Recreation removed both in 1948 during a restoration effort. In the 1960s, Weinman’s bronze eagles were placed in storage after years of vandalism. A full restoration of the monument, which included a deep cleaning of the column and plaza, repairs to both, and the reinstallation of the bronze eagles, was completed in 2008.