This structure was the second permanent church building constructed in Phoenix by the LDS/Mormon church. The first, built in 1918 and demolished in 1969 (at the corner of 7th and Monroe Streets). This 1932 building served the local congregation until 1972 where it was sold the Arizona Department of Transportation. The DOT was going to tear it down for the construction of the Interstate Highway 10, but a protest by the local historic societies and LDS congregations were able to designate the structure as a historic landmark, so the interstate was built near it. Today the building houses the Great Arizona Puppet Theater.

Phoenix Second Ward Chapel was built in 1932 and is the oldest standing LDS ward in Phoenix. 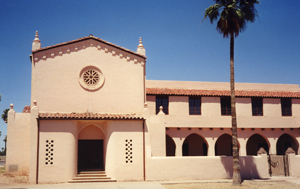 Mormon architect Harold W. Burton designed the chapel in the Spanish Revival style, which was popular at the time. It features a seating capacity of 400 and an organ installed by the Hartford, Connecticut-based Austin Organ Company. The chapel is the oldest LDS ward still standing in the city. Its influence helped the LDS community grow and was the first one to add a cultural hall.
The LDS owned the chapel until 1972 when the Arizona Department of Transportation purchased it to make way for the possible expansion of Interstate 10. Fortunately, the chapel was designated a historic site and the freeway was redirected, saving the chapel from demolition. The Phoenix Arts Council used the building for several years until the Great Arizona Puppet Theater bought it in 1996.