These log buildings and corrals are a reconstruction of the trading post operated by mountain men Jim Bridger and Louis Vasquez in 1846. The post was originally built in 1843 when the fur trade was rapidly dying due to a change in Eastern fashions and depletion of beaver from Rocky Mountain streams. The establishment of this trading post, known as Fort Bridger, marked the end of the era of free roaming trappers and the beginning of the westward movement of civilization. Thousands of emigrants stopped here for supplies, smith-work, or fresh animals on their way west to find land, gold, religious freedom, or a fresh start in a new land. 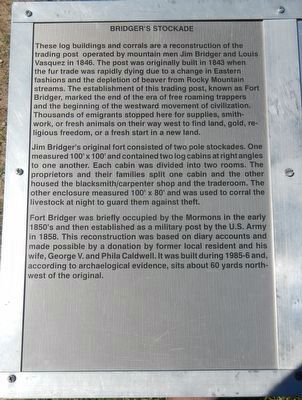 Entrance to the Stockades 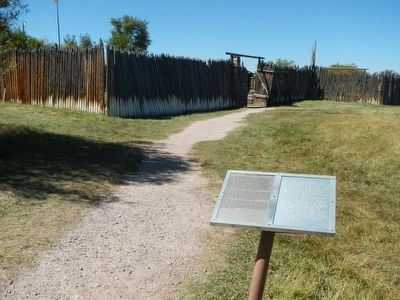 One side of the Stockades 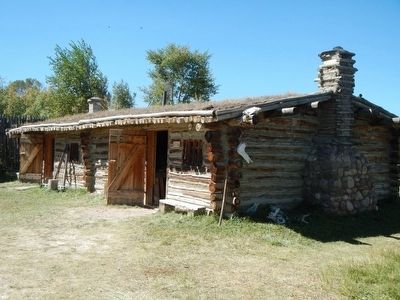 Another part of the Stockades 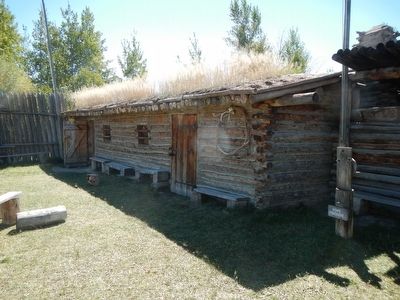 Jim Bridger's original fort consisted of two pole stockades. One measured 100' x 100' and contained two log cabins at right angles to one another. Each cabin was divided into two rooms. The proprietors and their families split one cabin and the other housed the Blacksmith/carpenter shop and the trade room. The other enclosure measured 100' x 80' and was used to corral the livestock at night to guard them against theft.

Fort Bridger was briefly occupied by the Mormons in the early 1850s. This reconstruction was based on diary accounts and made possible by a donation by former local resident and his wife, George V. and Phila Caldwell. It was built during 1985-6 and, according to archaeological  evidence, sits about 60 yard northwest of the original.  The Bridger-Vasquez stockade was not only an active trading post but soon became a popular stopping point on the Oregon Trail. The post became one of the most important outfitting points for emigrants along the Oregon Trail and was a vital re-supply point for wagon trains on the Oregon Trail, California Trail and Mormon Trail.

According to Wyoming Tales and Trails, the camp scene above right is "...somewhat inaccurate. The Fort in the right background had been burned down by William A. Hickman in the autumn as a part of the Mormon's scorched earth defense. The tents are also inaccurate. The Army used 250 of Henry Sibley's newly invented and patented conical tents rather than the walled tents depicted in the image."

Wyoming Tales and Trails also posts this description of the scene at Fort Bridger when the Army arrived. It is written by a New York Times correspondent. The term fort is deceiving in the American West as it could mean a military post, a supply camp, barracks, or a civilian trading post.     The location and supply of materials largely dictated what these forts were built of

Where wood and lumber were readily obtained, the familiar wooden stockades were erected but in the arid southwest adobe walls and buildings were built out of necessity.   Some forts were no more then a few worn out cabins such as Fort Bridger or an abandon mission such as the Alamo.

How the forts were constructed depended on date, location and Indian hostilities at the time. Fort Phil Kearny and Fort Abraham Lincoln were elaborate timbered forts with blockhouses on each corner and extensive barracks

Most of the forts are crumbling ruins long age abandoned, some only exist by a bronze marker of their whereabouts during the heyday of the settling of the West.  A few are active military posts,  Fort D. A. Russell now named Warren Air Force Base near present day, Cheyenne, Wyoming and Fort Bliss near El Paso, Texas.

Legends of America; A Travel Site for the Nostalgic & Historic Minded provided me with wonderful details about the history of Fort Bridger and the biography of Jim Bridger. Stanbury Expedition sketch on a page titled, "The Oregon Trail" as well as the 1843 and modern Oregon Trail Maps. Roadside Use of Native Plants, Wyoming, gave me a list of deciduous and evergreen trees found in the Fort Bridger area.