On August 3, 1855 the Church of Jesus Christ of Latter-day Saints concluded arrangements for the purchase of Fort Bridger from Louis Vasquez, partner of James Bridger, for $8,000. Final payment was made October 18, 1848. A cobblestone wall was erected in the fall of 1855, replacing Bridger’s stockade. A few additional log houses were built within the fort. The place was evacuated and burned on the approach of Johnston's Army September 27, 1857. A portion of the wall is here preserved. In 1855 Fort Supply was established by Brigham Young six miles south where crops were raised for the emigrants. —Utah Pioneer Trails and Landmarks Association"

A surviving portion of the Mormon Wall 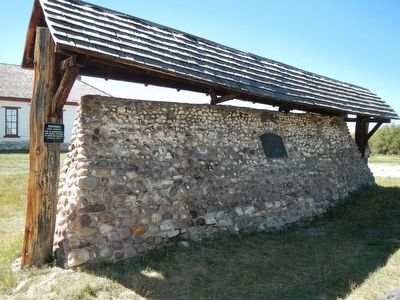 A marker embedded into the Mormon Wall 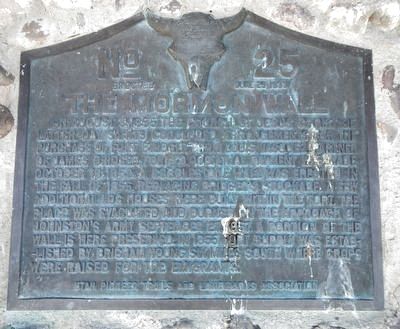 An old picture of Ft. Bridger showing part of the Mormon Wall 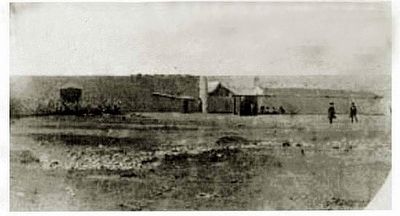 The Vasquez/Bridger trading post supplied Mormons with supplies on their trek to the Great Salt Lake that Bridger helped to discover. And Bridger discovered better and easier routes for emigrants. Nevertheless, no love was lost on Bridger by his Mormon neighbors. As soon as Mormons settled near the Bridger stockade, tensions arose between Bridger and the new settlers.  Ten years later they seized Fort Bridger and the following year they established Fort Supply specifically for Mormon emigrants.  It was located about twelve miles south of Fort Bridger and was meant to bypass Bridger.

Mormon settlers reported to Brigham Young, in Salt Lake City, that Bridger was selling liquor and ammunition to the Indians — a violation of federal law.  On 26 August 1853, Young, a federal Indian agent, started a Mormon militia of forty-eight men for Fort Bridger from Salt Lake City.  Upon arrival the Mormons discovered plenty of liquor, which they destroyed.  They found no ammunition.

Jim Bridger escaped minutes before the Mormons arrived. Two months later, in October 1853 Bridger wrote to General B.F. Butler, a U.S. Senator.  In his letter, Bridger claimed he was "robbed and threatened with death by the Mormons" and that over $l00,000 of his goods and supplies had been stolen.

Worse was to follow. In the spring of 1854, Brigham Young sent fifteen well-armed men to take control of the Bridger trading post. The men built a large wall of stone around the fort and several stone buildings. As well as the stockade, these men also took control of the Green River ferries. Both locations were an integral part of the Mormon settlement plan and considered to be part of the greater Utah territory.

Mormons controlled the fort until Jim Bridger returned a year later in July 1855.  The Mormons asked him to sell, but he refused.  However, due to pressure from the Mormon militia, he agreed to a sale of $8,000 a month later.  $4,000 was paid immediately, and the balance was to be paid fifteen months later in November 1856.  However the Utah War, an armed dispute between Latter Day Saint settlers in Utah Territory and the U.S. government intervened.  Because of this confrontation, which lasted from May 1857 until July 1858, Jim Bridger never received the $4,000 balance owed him for his fort.