Battle of Brooklyn, or The Battle of Long Island, took place in New York City, between present-day Manhattan and Brooklyn. New York was key spot for both British and Washington's troops. Although New York was captured by British, Washington's brilliant plan saves his army from being captured.

Map that shows how the battle went

Fort Greene Park is built for the site of memorial for Americans who died on the British ships. 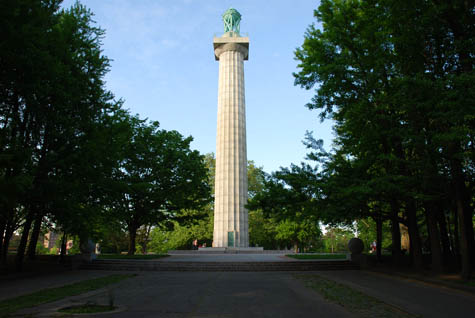 Washington and his men had surprisingly won the conflict during Siege of Boston, and they now wanted to protect New York from being captured. New York was important for both because it was the spot where British army could land on, and Washington knew that he has to defense the landing area for many different reasons. For example, it could block reinforcements, or at least delay the reinforcements from the Britain mainland to America. Washington aligned his troops in the city's harbor to prepare for the British arrival. The British troops, led by General William Howe, who were composed of about 32,000 soldiers, landed on Staten Island. They first assaulted Gravesend Bay, and started to prepare to attack Manhattan. Meanwhile, Washington knew that Manhattan would be a key spot to defense, thus moved his troops back to Manhattan and stabilized his troops there.

On August 22nd, British troops started to move into Brooklyn. The major fights started, Brooklyn's peaceful farmlands turned into battlefield. British, with dominating number of soldiers compared to Continental Army's, quickly approached to Manhattan. Washington and his men were half right and half wrong. As they predicted, The British troops did attack Manhattan. However, most of direct attacks were decoy. Instead, General Howe led his main army to go behind Continental army and pushed them into a corner by surrounding them with his army.

Washington needed to find a way to save his army from British troops. It was nearly impossible to win against British army directly, since it was about 10 times bigger than Washington's army. Howe also needed to find a way to finish Washington and his army off; And, Washington's brilliant idea cracked British army. Continental army was first at Jackson Heights, which is located at the upper Brooklyn, relatively close to Manhattan. Howe ignored  the advice of his subordinates and storm the redoubts at Brooklyn Heights. His subordinates wanted complete victory by attacking without taking a breath, but Howe didn't. There are many reasons why he stated he didn't attack. One of them was his fear of same thing happening as what happened in Bunker Hill, where the battles were costly and bloody. As a result, Washington was able to retreat back to Manhattan by boat, saving his whole army from being captured. However, British, at the end, won the Battle of Brooklyn. About 1,000 Continental army soldiers died, while only 400 British soldiers died. On September 15, the British captured New York City.

Fort Greene Park was built by American General Nathanael Greene of Rhode Island. It was to be built around Fort Putnam, which was one of the forts that formed defense line during the Battle of Brooklyn. Greene Park is the site of memorial to those Americans who died on the British prison ships.