The largest open pit iron ore mine in the world, the Hull–Rust–Mahoning stip mine was also the first of its kind on the Mesabi Iron Range. Mining operations began in the late 19th century and by the time of World War I, a quarter of the nation's iron ore came from this open-pit mine. The site was listed on the National Register of HIstoric Places in 1966 and the range is still being mined today.

The mine was added to the National Register of Historic Places on November 13, 1966. 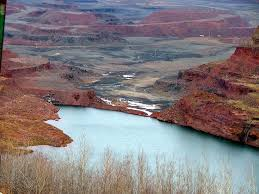 The largest still-operating open pit iron ore mine in the world, the Hull-Rust-Mahoning Mine is currently more than three miles long, two miles wide, and 535 feet deep. The site began as an underground mine in the 1890s but the availability of steam-powered and later diesel-powered equipment and the location of ore just under the earth made pit mining a more profitable option.

This area is often referred to as the man-made "Grand Canyon of the North" as it was the largest and also the first strip mine on the Mesabi Iron Range. The growth of the mine resulted in the town of Hibbing being moved due to required space.

The mine is currently operated by the Hibbing Taconite Company. The company uses rotary drills, 33-cubic-yard shovels, and 240-ton production trucks. Occasionally a dynamite blast may be witnessed as the company blows away bedrock. Over 519 million tons of earth and rock has been removed from the location and more than 800 million gross tons of iron ore have been shipped from the mine.