This stadium is the home of the Baltimore Ravens football team. The Maryland Stadium Authority broke ground for the stadium on July 23, 1996. After more than two years of construction and 220 million dollars, the Maryland Stadium Authority opened the venue to the public on September 6, 1998. Since then, the stadium has held record-setting crowds for Ravens games, college sporting events, and concerts. This stadium is an iconic feature of Baltimore Inner Harbor's stunning architecture. 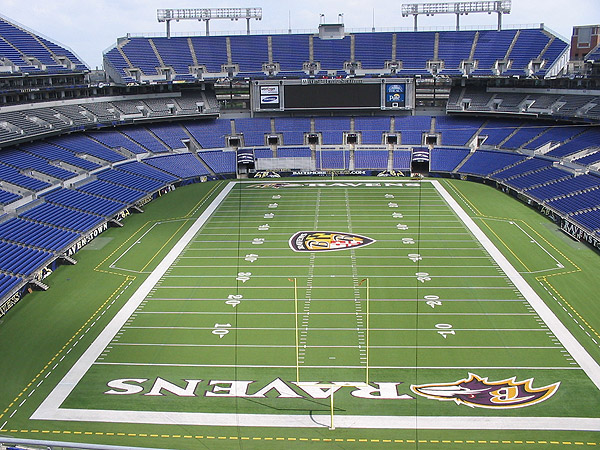 On March 29, 1984, Robert Irsay, the owner of the Baltimore Colts, moved his team to Indianapolis in the middle of the night. Baltimore residents were shocked to learn that their beloved football team had vanished in the middle of the night, and many wanted to know why Irsay decided to move the team to Indianapolis. Baltimore Colts fans learned that Irsay moved the team because his requests for a new stadium were rejected. Irsay was discontent with the condition of Memorial Stadium, so he made countless requests for a new stadium. Mayor William Donald Schaefer and the Maryland legislature, however, rejected Irsay's requests for a new stadium. In fact, Mayor Schaefer stated, "We're not going to build a new stadium. We do not have the bonding capacity. We don't have the voters or taxpayers who can support a $60 million stadium. One-third of the people in Baltimore pay taxes. Unless private enterprise builds it, we won't build it." Adding insult to injury, the Maryland Senate passed a bill to seize ownership of the Baltimore Colts from Irsay under eminent domain.

Robert Irsay was faced with the threat of losing his football team, so he contacted Mayor Hudnut of Indianapolis. Hudnut welcomed the Colts with open arms, and he also offered the Colts the newly constructed Hoosier Dome. Irsay accepted Hudnut's offer, and Hudnut sent fifteen Mayflower moving trucks to Baltimore. The trucks arrived at 6 PM; the Baltimore Colts began their move to Indianapolis eight hours later. While the team was moving, the Maryland House of Delegates had passed the bill to seize the Colts from Irsay, and Governor Hughes signed the bill. Irsay made sure that all fifteen moving trucks took different routes in order to minimize chances of being stopped by the Maryland State Police. Before the police enforced the eminent domain bill, the Baltimore Colts had become the present-day Indianapolis Colts.

For the next twelve years, Baltimore did not have a professional football team. On November 6, 1996, Art Modell, the owner of the Cleveland Browns, accepted an invitation to move his team to Baltimore. Because of legal reasons, Baltimore's new football team had to adopt a new name. The team was named after Edgar Allan Poe's poem, "The Raven." The Baltimore Ravens played their first two seasons in the antiquated Memorial Stadium while the Maryland Stadium Authority began construction for a stadium that could adequately host a professional football team. The construction site for the new stadium was the previous location of the Wm. Knabe & Co. piano factory, which was open during the Great Depression. The stadium opened on September 06, 1998, under the name of the Baltimore Ravens Stadium at Camden Yards. The stadium kept this name until 2000, when it was renamed the PSINet Stadium. This name also lasted for only two years because Ravens Stadium became the new name in 2002. This name was also short-lived because M&T Bank acquired naming rights for the stadium in 2003.

M&T Bank Stadium now serves as a state-of-the-art facility. The stadium has five levels: the lower bowl, the club level, the 300 suites level, the 400 suites level, and the upper bowl. The stadium opened with a grass surface, but the stadium received Sportexe Momentum 51 turf in 2010. The Ravens growing popularity has also resulted in record setting crowds. During a 2011 playoff game between the Ravens and the Houston Texans, the stadium had a record-setting attendance of 71,547 people. While the Ravens are the primary occupants of M&T Bank Stadium, this stadium also hosts other sporting events. The stadium has hosted Crab Bowl Classic games between the University of Maryland's and the Naval Academy's football teams. The Army-Navy football game has also been held at M&T Bank Stadium. The Maryland Post-Secondary Athletic Association also holds its state football championships each year at M&T Bank Stadium. Celebrities such as Jay-Z and Beyonce have also performed at the stadium. The stadium continues to be an iconic feature not only for the Inner Harbor's architecture but also for Baltimore City's culture.

The hours vary each week.