The Little White Schoolhouse, Birthplace of the Republican Party

Constructed in 1853, this modest wood frame schoolhouse was the site of a meeting in 1854 that gave birth to the Republican Party. The building later became the home of Wisconsin governor George Peck. The building was saved and moved several times in the 20th century thanks to local preservationists.

This modest schoolhouse was home to an 1854 meeting that resulted in the creation of the Repulican Party. 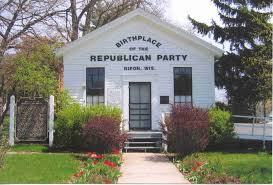