This monument preserves the history of the fall of the Berlin Wall, one of the most memorable chapters of Cold War history. The end of the Second World War saw Germany divided into Eastern and Western spheres of influence, as was Berlin. However, Berlin was located in the eastern sector which was under direct control of the Soviet Union. Conditions worsened in the Soviet sector of East Berlin, but in West Berlin, they were able to recover with the aid of the United States. As a result, thousands attempted to escape from East Berlin to West Berlin. In response, the Soviet Union ordered the construction of a wall to prevent the escape of people to the West. This wall stood between 1961 and 1989 when the people of East Berlin and refugees from throughout central Europe responded during a confusion of orders and was able to successfully destroy the wall without soldiers interfering. The reaction reflected the fact that the wall was a daily reminder of the Cold War and the lack of freedom and opportunity in the Soviet sector. The monument includes a 10-foot section of the Berlin Wall as well as several plaques and interpretive markers.

The marker at the site which talks about the Berlin Wall and the actual section that is beside. 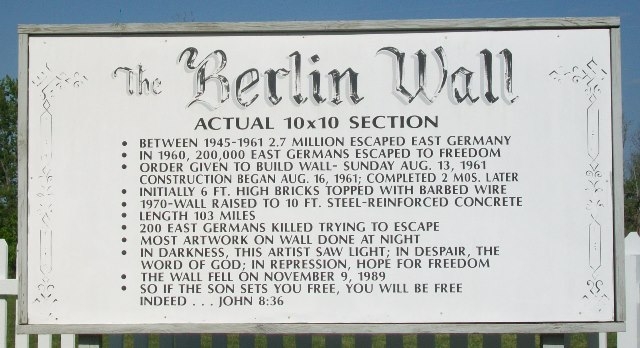 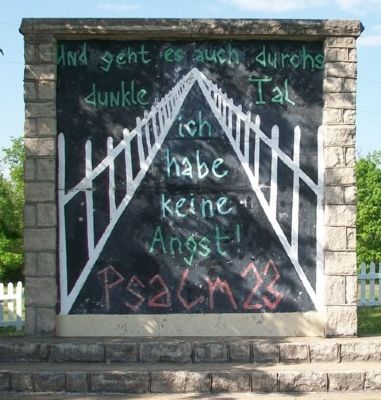 A photo of the Destruction of the Berlin Wall 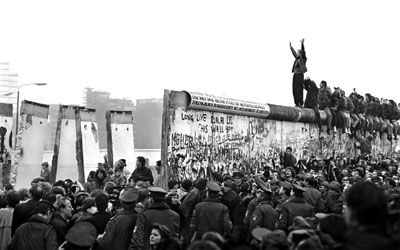 The end of the Second World War saw a drastic change in Germany, with the entire country being divided into halves and the capital city itself was divided into two spheres of influence. This divide saw the people on the Eastern side of Berlin desperate to make it to the West and escape the Soviet's. Between 1945 and 1961 2.7 million people escaped from East Berlin to West Berlin. In the latter years there was an influx of people escaping with two hundred thousand people escaping in 1960 alone. This caused the Soviet Union to order the construction of the Berlin Wall, this construction would begin on August 16, 1961.

Originally standing at six feet tall with barbwire on the top, the wall was raised to 10 feet in 1970 with steel reinforced concrete. The wall stood for a hundred and three miles in length to prevent people from traveling great distances to escape and an estimated two hundred people were killed attempting. The wall became a symbol of the Cold War and raised critical questions about the accuracy of Soviet propaganda if a wall was needed to prevent citizens from leaving the Soviet-controlled sections of the city. Demonstrating the human will and small acts of resistance, this 10 x 10 piece of the wall includes protest graffiti that was added in the darkness of the night to avoid detection.

The Berlin Wall was the site of one of the most memorable speeches of the Cold War when Ronald Reagan stood with the Brandenburg Gate at his back, with East Berlin in listening distance declaring for the wall to be torn down. The wall would eventually come down in 1989 , which again is another one of the most iconic images of the Cold War when citizens were dismantling the wall themselves. The destruction of the Berlin Wall also symbolized the collapse of the Soviet Union and the end of the Cold War. When it comes to the Cold War nothing more symbolizes the ideological battle between the two superpowers, more than the Berlin wall. This Monument allows one to see an actual piece of living history in the United States.