The Wendelin Grimm farmhouse, located at the Carver Park Reserve in Victoria, Minnesota, is a great place to visit if a guest is looking to learn about American agricultural history. Wendelin Grimm is the man who was the first to breed a new strain of alfalfa that could grow all through the winter, which shaped the agricultural history of America. This historic home that was once surrounded by Grimm's huge farm is now open to tourists, and inside they can learn about the Grimm family history, how Grimm alfalfa came to be and how it was grown, and what farm life was like in the 1800s. 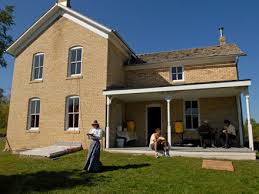 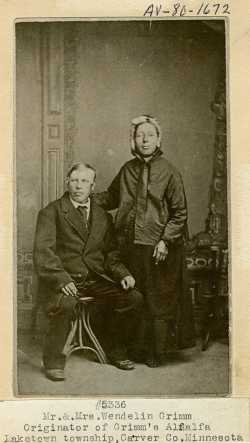 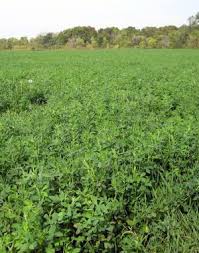 Wendelin Grimm and his wife Julianna Grimm were originally from Germany. In 1857, they decided that they wanted to start their new married lives in America, and therefore immigrated and decided to settle in what is now Victoria, Minnesota. Wendelin bought a large 160 acre plot of land, and there, Wendelin got to work on building a two-story brick home for him and his wife. Being an immigrant whose main job back home in Germany was farming, Wendelin thought to bring with him some seeds that he could plant in order to get his farm started. After clearing the woods and plotting his farmland, the seeds were planted in a few places and something more than an alfalfa plant began to take root.  Little did Wendelin know that these plants, or, "everlasting clover" would eventually become the main source of every single modern variety of Alfalfa plant in American agriculture, an incredible development.
Most alfalfa plants wither and die once the weather becomes cooler, this was the case for Wendelin's plants as well, except just for a few that managed to survive. The seeds of these plants that did survive the harsh winter were then picked by Grimm and replanted again the next farming season. As these seeds that survived were replanted every year, more and more plants lasted through the winter as they grew accustomed to the cold, until eventually, every plant flourished year-round. By using the process of natural selection, Grimm had created North America's first strain of alfalfa that was winter-hardy. This alfalfa began to be used by hundred of farmers, and soon Grimm Alfalfa was a household word in all farmhouses in the mid-west.
In the 1960s, when the Carver Park Reserve was established, Wendelin's farm property was also acquired and became an important subject of preservation. Thanks to the Minnesota State Preservation Office, the historic home was repaired and by 2001, it was finally ready to open to the public. This agricultural history center is now used to teach guests about the accomplishments of Wendelin Grimm and how he contributed to the agricultural industry of North America. On Saturdays and Sundays, visitors can enjoy free guided or self-guided tours through the home, where they can gain new understanding of the important relationship between farm land and people.