The City Reliquary is a not-for-profit community museum and civic organization located in Williamsburg, Brooklyn. The facility houses a wide range of New York City artifacts on permanent display. In addition, it hosts community collections and regular cultural events. Its goal is to connect visitors to the past and present of New York. 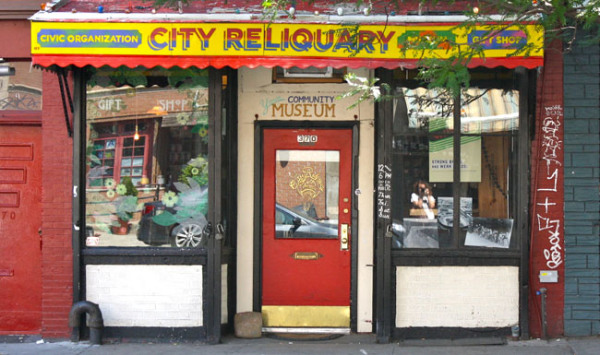 It began in 2002 at an apartment at the intersection of Havemeyer and Grand Streets in Williamsburg, Brooklyn. It moved to its current storefront in January 2006. Collections have continued to expand since the location change.

Items such as fragments of landmark buildings, subway tokens, geological core samples, paint chips from the L train, and much more, each tell their own story of New York City’s past. There are items about the city's sports history, the State of Liberty, lamp posts and relics that have washed up on shore. The facility also houses rotating exhibitions of community collections, which can be seen in the storefront window.

The museum has expanded to hosts numerous community events including block parties, backyard concerts and film events throughout the year. It also serves as a destination for collectors.

The City Reliquary collaborates with PS132 to create exhibitions of student work. Donations from patrons help in expanding the collections and programs.

Noon to 6 p.m. Thursday through Sunday