Before Fort Popham was even built, the area was used as a defense during the American Revolution and the War of 1812. The "half-moon" fort that can be visited today was built in 1862 to defend Maine's capital from the Confederacy, but construction was never completed due to improvements in fortifications occurring faster than they could be included in Fort Popham. Forty-two cannons and two barracks were originally built here, but none stand today. The fort was added to the National Register of Historic Places in 1969 and can be visited between Memorial Day and September 30th, even though it is in a general state of disrepair due to a lack of refurbishments.

This photo gives an aerial view of Fort Popham, showing the 30-foot walls that overlook the Kennebec River. 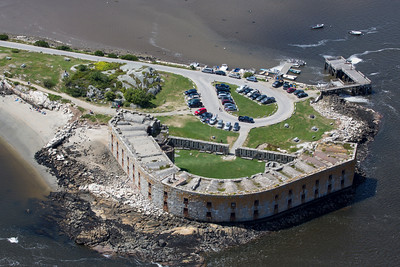 Fort Popham’s history begins before the fort itself was constructed. During the American Revolution, this location in Phippsburg, Maine held a minor fortification. In 1808, the federal government added a battery, shortly after Thomas Jefferson’s Embargo Act of 1807, and Fort Popham began to be used to enforce the embargo on France and Britain. Because the embargo led to the War of 1812, the fort was manned until 1815, with minor action occurring during the War of 1812. Actual construction of the fort began in 1862, lasting until 1869, but never being fully completed, due to the constant improvements in fortifications that were taking place so rapidly.

The American Civil War prompted the construction of Fort Popham.  The purpose was to help defend Maine’s capital, Augusta, from Confederate invasion. The Union was also worried of potential invasions from Britain during the Civil War, and they worried about the damage that may be done to the capital and the nearby shipyards in Bath. The 7th Unassigned Company of Maine Infantry was garrisoned at Fort Popham from October of 1864 until July of 1865. Troops were also stationed here during the Spanish American War in 1898. During World War I and World War II, Fort Popham and the nearby Fort Baldwin were used to station troops and artillery. No shots, however, were ever fired in battle at Fort Popham.

Fort Popham was constructed as a closed lunette, meaning the outer walls of the fort resemble a half-moon shape. The outer walls are thirty feet tall, constructed of granite taken from the nearby Fox and Dix Island. Inside these walls, forty-two cannons are placed on two separate tiers overlooking the Kennebec River. Spiral staircases at either end of the fort lead to the upper tiers, where a wide view of the Kennebec River is present. Two barracks were constructed but are no longer standing. Underneath the fort, there are several cisterns that were used. The last work done to Fort Popham was before the start of World War I. when modern mine equipment was installed. After the war, this equipment was removed.

Today, Fort Popham can be visited as Fort Popham Historic Site between Memorial Day and September 30th. It was added to the National Register of Historic Places on October 1, 1969. Nearby is Popham Beach State Park, which houses the location of Popham Colony, one of the first colonies in the New World, although the colonists all returned to England and the colony itself disintegrated. The fort itself has not been refurbished, with the fort now in a state of disrepair and ruin.