Built between 1829-1832, the Maine State House serves as Maine's seat of government. It was designed by one of the country's greatest architects, Charles Bulfinch. It is his last recorded work in a career that spanned fifty years. It is also the only one of his to have the complete set of original blueprints, which are now housed in the State Archives. Over the years, the building was remodeled and expanded, giving it a much different appearance than its original design. The most notable change is the dome which was built to resemble other capitol domes. The state house was listed on the National Register of Historic Places in 1973. Tours are administered by the Maine State Museum. 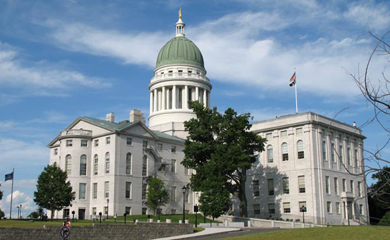