On the evening of December 5th, 1876, approximately three hundred people were killed at this location when the new and popular Brooklyn Theatre was consumed by fire. The tragedy remains the third-most deadly fire in American history. Built in 1871 at the present location of the park just west of the court building, the Brooklyn Theatre usually filled all of its 1,200 seats. The theater was home to a number of original productions, such as “The Two Orphans,” which enjoyed a run of sell-out performances throughout the fall and winter of 1876. Nearly a thousand people purchased tickets to see one of the final performances of The Two Orphans on December 5th, 1876-the day the fire produced thousands of orphans. Up to 100 victims were burned beyond recognition and buried in a mass grave at nearby Green-Wood. A tall granite monument at Green-Wood Cemetery marks the common grave.

Aftermath of the Brooklyn Theatre Fire 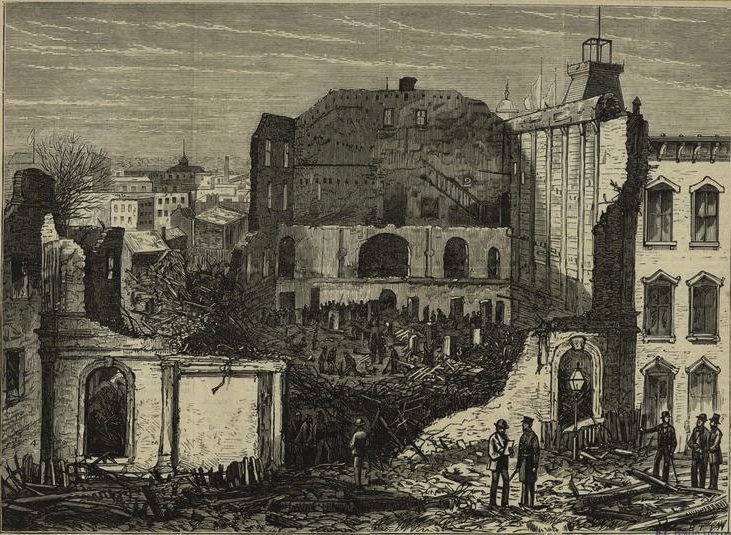 Photo showing the aftermath of the fire 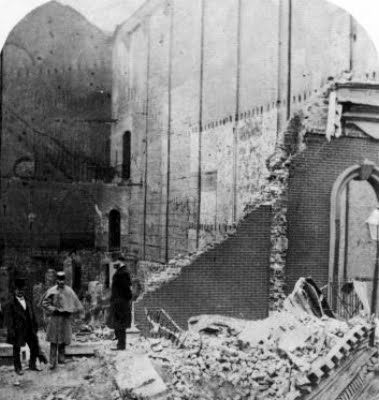 This obelisk at Green-Wood Cemetery near Fifth Avenue and 25th Street in Brooklyn was built to honor the memory of 103 victims who were burnt beyond recognition and buried in a mass grave. 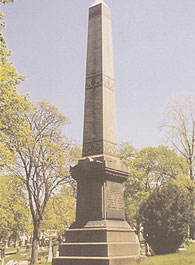 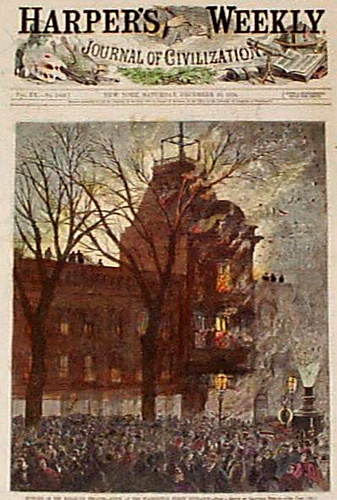 The theater prior to its destruction-the theater is the building with the large mansard roof to the left of the post office. 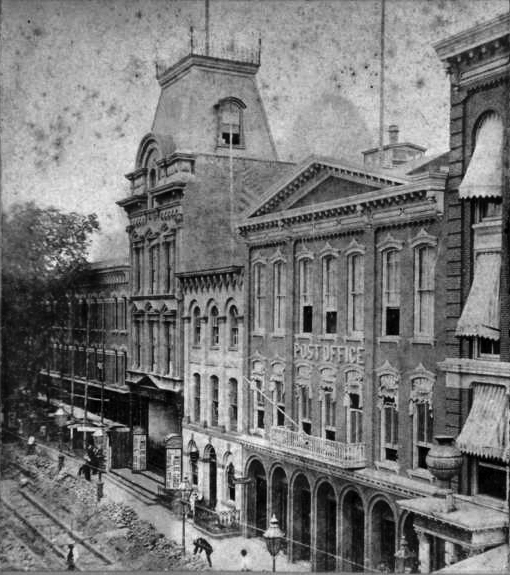 During preparations for the final act, a stage manager noticed a small fire burning among some of the extra scenery that had been stored behind the stage. The fire spread while the actors and managers decided whether to continue the performance or risk issuing an announcement about the fire which might cause panic. Before they could make a decision, the curtain raised and the audience noticed the panic and smoke. Shortly after the curtain raised, an unknown person yelled “FIRE!” Bedlam ensued as the fire grew out of control. Within seconds, a thick, dark blue smoke throughout the theater. The panicked crowd rushed the stairs, trampling many underfoot who would later die of smoke inhalation. Thirty minutes after the stagehand spotted the fire, the floor gave way and one end of the building collapsed, killing anyone who had become trapped but might have been rescued by firemen.

Built in 1871 and located at the corner of Washington and Johnson Streets, the Brooklyn Theatre quickly gained a reputation as Brooklyn’s most revered theater, and playgoers were often delighted to find upscale productions as well as well-known actors and actresses. According to Brooklyn Fire Marshall Patrick Keady, the theater had better exits than most other public buildings at the time. Three sets of doors were designated as special exits, all of which opened onto Flood’s Alley, a small street running alongside the eastern side of the building.

The special exits and large main entryways led Architect Thomas R. Jackson to believe that 1,450 people could evacuate within five minutes. However, there was a significantly overlooked flaw in the theater’s family circle, which, being on the third floor and farthest from the stage, offered the lowest admission price. The family circle, located on the third floor of the theater, could hold 450 people and had its own entrance and box office. It was served by a long, single stairway to street level. Although wider than most gallery passages at the time, it would prove devastating for a panic.

Timeline of the Fire

As usual, the Brooklyn Theatre enjoyed a substantial crowd on December 5th, with over 1,000 people in attendance including 400 in the family circle. Between the 4th and 5th Act, around 11:00 pm, the play The Two Orphans had gone without incident, and during the intermission, the curtain was down. Meanwhile, the actors and actresses were getting into position. About 20 minutes later, with preparations for the final act underway backstage, the stage manager J.W. Thorpe spotted a small fire, no bigger than his hand, from the left (prompt) side of the stage. The most prevalent cause was a partially detached canvas that had slipped past the wire guard of a gas light and ignited.

Paint buckets filled with water and the theater’s fire hose weren’t readily accessible, so Thorpe and two carpenters tried extinguishing it with long stage poles. At this point, the curtains rose as people backstage tried controlling the fire. After only a few lines, a few of the on-stage actors and actresses became aware of the fire, but continued with the performance thinking that unusual behavior would incite panic. The audience, meanwhile, grew restive, and the fire spread to the rigging loft, causing flaming bits of debris to float onto the box sets and other places backstage. Smoldering debris then fell onto the stage, smoke was curling toward the ceiling, and the actors fell out of character. The audience, already concerned, rose from their seats and immediately crowded the aisles.

At this point, someone yelled "fire" and caused greater fear to the playgoers, who began panicking. The actors and actresses, as well as ushers and others, tried calming the audience. One actress, Kate Claxton, tried telling the crowd that the fire was part of the play. Another actor, J.B. Studley, essentially told the crowd that if he can be on-stage with the fire behind him, the audience can calmly and reasonably exit. Nevertheless, panic had taken hold and the audience was rushing by all means to escape.

With the exit and specialty doors open, and with the area being the windiest part of Brooklyn and New York, the opened doors only enraged the flames. Fortunately, people sitting in the parquet were able to escape in three minutes; however, since the parquet held the more expensive seats, it was the least crowded. The dress circle patrons were on the second floor and had to contend with two flights of stairs that led to the main door, where the parquet playgoers were exiting. This inevitably caused a halt in the stairwell, with over 150 people jammed in the stairs. Due to the panic, many were unfortunately crushed in this stairwell.

The most devastating aspect of this tragedy occurred with the family circle patrons, where 400 people were tasked with rushing from the third floor to the street level door. The fire had become so intense that smoke was quickly filling up the roof area, making the need to leave much more urgent. Many jumped from the gallery, more were crushed in the panic on the stairwell, and even more suffocated due to smoke inhalation from the thick, blue smoke that had appeared. By 11:45 pm, the eastern side of the building collapsed, and anyone who lived to tell about what happened inside of the theater had already escaped.