Originally designed as a Presbyterian chapel in 1878, this now LDS/Mormon chapel was constructed and named in honor of the founder and namesake of the town Kane, PA: Thomas L. Kane. An attorney, abolitionist and military officer, Kane was a friend and advocate of the Mormon church after learning of their plight as they headed to the Salt Lake Valley after the murder of their prophet-founder, Joseph Smith Jr. He helped garner support for their trek west, helped in the organization of the Mormon Battalion, argued for their statehood, helped end the bloodless Utah War and stayed a friend until his death in 1883. Also serving in the American Civil War for the Union, he attained the rank of Brevet Major General. This chapel is the only LDS chapel to have stained glass windows. Statues to Kane stand on chapel grounds and Utah State Capital grounds. It changed hands to the LDS in 1970 and later donated to the Kane Historic Preservation Society and is still used for LDS worship services. 1977 it was listed in the National Register of Historic Places. The city of Kanesville, Utah was named in his honor. 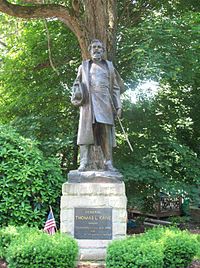 Brevet Major General Kane towards the end of the Civil War 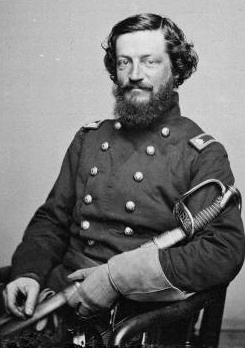 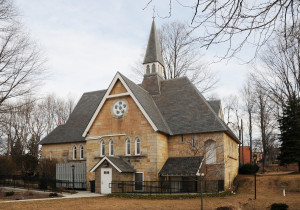 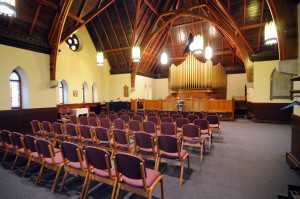 "Thomas L. Kane, although not a member of The Church of Jesus Christ of Latter-day Saints, was nevertheless a courageous supporter of the Latter-day Saints. Kane first came into contact with the Mormons in May 1846 at a conference held in Philadelphia where he met Jesse C. Little who was trying to get support for the Saints’ journey west

Kane helped negotiate the enlistment of members of the Mormon Battalion and traveled to Utah as an unofficial negotiator to promote peace during the Utah War. He was a strong supporter for Utah Statehood. When Brigham Young passed away, he traveled to Utah to express his remorse and reaffirm his support to the Saints.  He was a loyal friend of the Church until his death in 1883.

In 1878, Kane built a Presbyterian chapel at the request of his aunt, Ann Gray Thomas. He expressed before his death that he would like to be buried between the stone entrances of the chapel.

The chapel was acquired by The Church of Jesus Christ of Latter-day Saints in 1970 and restored. Two years later, a statue of Major General Kane was placed on the premises. The building currently serves as a meeting place for the local branch and contains a family history center in the basement."

Besides the town of Kane, the city of Kanesville, Utah was also named in Thomas Kane's honor and a monument was erected near city hall to him.