Dry Tortugas National Park is about 68 miles west of Key West and is in the Gulf of Mexico. This park is home to the seven Dry Tortugas islands and Fort Jefferson, a large unfinished fortress. The islands include archipelago’s coral reefs. The parks most notable characteristics include the sea life, tropical birds, and the vibrant coral reefs. The legends of shipwrecks and sunken treasures have brought people from across the world.

Aerial map of the island and Fort Jefferson 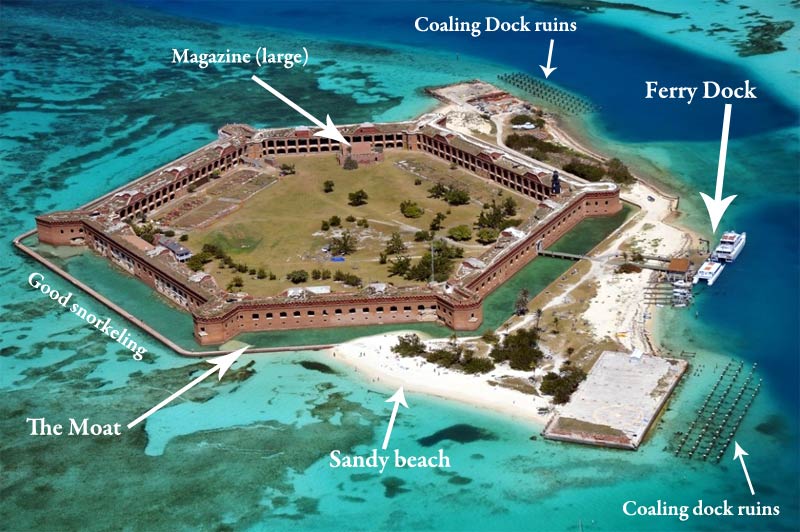 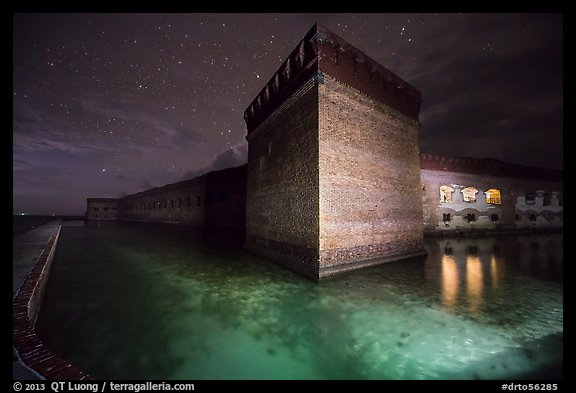 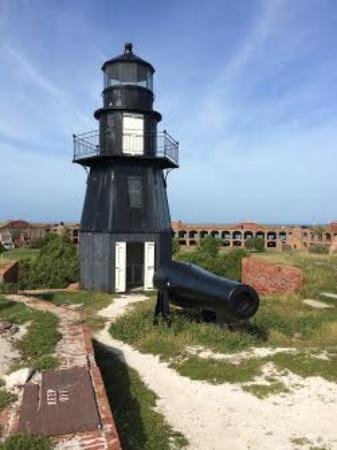 The Islands got their name from the first European to visit the islands, Juan Ponce De Leon. He visited on June 21, 1513 and caught 160 sea turtles. In result, the Islands were named “Tortugas” or turtles. The Dry part came from the fact there was a lack of fresh water on the island.  It is home to a sizable military fortress, Fort Jefferson. It is the largest brick made structure in the western hemisphere and includes over 16 million bricks. It was built with the goal to protect the shipping canal that was quite lucrative in the mid-19th century. The islands are relatively flat in result the reefs were an issue for ships passing through. Many shipwrecks occurred when the ships were going through the 75-mile wide straits. Naturally it turned into a “ship trap” and today it is the site for many shipwrecks. In efforts to try to fix the problem they built a lighthouse in 1825 to warn ships coming of the reefs. Another larger lighthouse replaced the first in 1858.

The Fort was used as a federal prison after the civil war all the way up to 1874. One notable prisoner that was there was Dr. Samuel Mudd, who aided John Wilkes Booth after the assassination of President Abraham Lincoln. He originally was sentenced for life but after averting a yellow fever outbreak in 1865 he was pardoned. After 1874 coal fueled ships were introduced and the Fort was used as a coaling station through the Spanish-American War.

On October 26, 1992 by an act of Congress, to protect the reef and wildlife, the islands were re-designated as Dry Tortugas National Park. This act preserves the history of Fort Jefferson and the submerged history of shipwrecks marine life that is available to the public. All national parks were closed including the Dry Tortugas during the government shutdown from 1995 to 1996. The Key West residents saw this negatively affecting their tourism-dependent economy, so they raised the money to keep it open. Once they raised the money they didn’t know who to give it to so they sent several civilian and fire department boats to Fort Jefferson in order to reopen the national park. The officials that tried to enter the fort were cited. This went to court but was quickly dropped.

The park had their highest visitation in 2000 there was 83,704 visitors. The visitation has decreased over the years to about 60,000 a year. The island is also a location where immigrants in homemade boats called “chugs” travel over from Cuba. This is an issue because the Dry Tortugas has limited resources and a crude radio system for reaching out to the Coast Guard.

One of the most unique things about the Dry Tortugas is the undisturbed historical artifacts and ecosystem. You can get to the islands by seaplane or Dry Tortugas National Park Ferry. Some activities you can do include scuba diving, saltwater, camping, snorkeling, fishing, picnicking, bird watching and kayaking. During May and June one can see the greatest concentration of sea turtles. If you want to stay on the island overnight, the only option you have is tent camping and there are several designated sites for this.