John A. Wilson Building and the Statue of Pierre L'Enfant

Named in honor of Washington DC Council Chair John A. Wilson Building, this municipal building is home to the offices of the mayor and many other departments. The building was completed in 1908. As a precursor to DC's attempt to place two statues of prominent leaders in the Capitol- a privilege given only to states, the city commissioned statues to abolitionist Frederick Douglass and Pierre L'Enfant, the designer of Washington D.C.'s master plan. While Douglass's statue was moved to the Capitol as part of an effort to honor DC residents similarly to those from U.S. states, the statue of L'Enfant remains. The exterior of the building is home to a statue of Alexander Robey Shepherd, perhaps the most influential civic leaders in the history of the city. Stephens' legacy is controversial, however, as he was known both as the "Father of Modern Washington" owing to his role in promoting public works progress and as a corrupt city boss who used public funds to maintain his power and reward his supporters with government contracts.

The statue is currently located inside the lobby at One Judiciary Square. 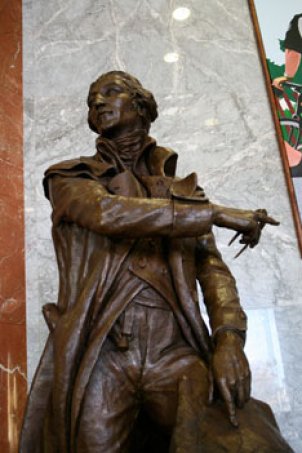 In 2006, Washington DC residents began an effort to create and place two statues of influential DC representatives in the US Capitol. Although each state in the union is allowed to place two statues of their influential residents in the Capitol, Washington D.C. was not allowed the same honor. City residents selected Frederick Douglass and Pierre L'Enfant as their preferred candidates for inclusion and the city government paid $200,000 to create statues of :'Enfant and Douglass. However, neither were permitted to be installed inside the Capitol upon their completion. Responding to growing pressure, Congress sought a compromise in 2013 by allowing the statue of Douglass to be placed in the Capitol. From the perspective of many DC residents, however, the inclusion of only one statue is emblematic of their second-class citizenship. Although Congress is given authority over nearly all matters involving District governance, residents of the District are represented only by one non-voting delegate in the House of Representatives.

From the perspective of Eleanor Holmes Norton, a non-voting member of the House of Representatives and the only member of Congress that represents the people who live in the city, the statue's exclusion from the Capitol is a metaphor for Washington's lack congressional representation. Holmes Norton worked to get the statue of Douglass inside the Capitol in recent years, and will work to do the same for the statue of L'Enfant., “I expect to get his done the way I was able to get Frederick Douglas done," she says. "It became impossible to refuse Frederick Douglas. I don’t see how the Senate can sit there and say ‘We don't want Pierre L'Enfant — the man who created the very city where the Senate and the House sit."