Drivers travelling along I-4 near Dover cannot fail to notice eight shiny Airstream RVs sticking out of the ground. This public art installation has been the center of local controversy as some believe it is an embarrassing eyesore while others believe it is kitsch art. The site was inspired by the more famous "Cadillac Ranch" of Texas that featured a line of automobiles similarly embedded into the ground. The creator of this public art exhibition, Frank Bates, also owns a nearby RV dealership. He created the site in commemoration of the Airstream RV's 75th anniversary. In response, local authorities ordered Bates to remove the site, claiming that it was a public nuisance rather than an artistic expression. Facing a prospect of a one hundred dollar fine for each day the RVs remained, Bates refused to pay and took the issue to court. Bates won his case on appeal and the "Airstream Ranch" remains.

Worker working on one of the RVs 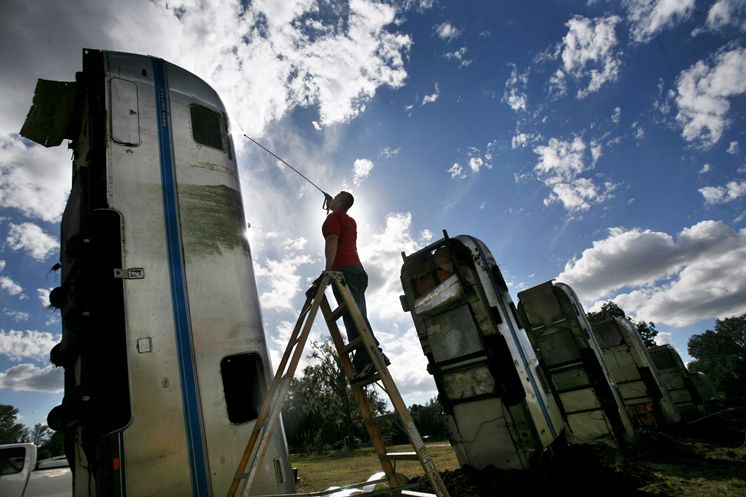 Picture of all of the RVs 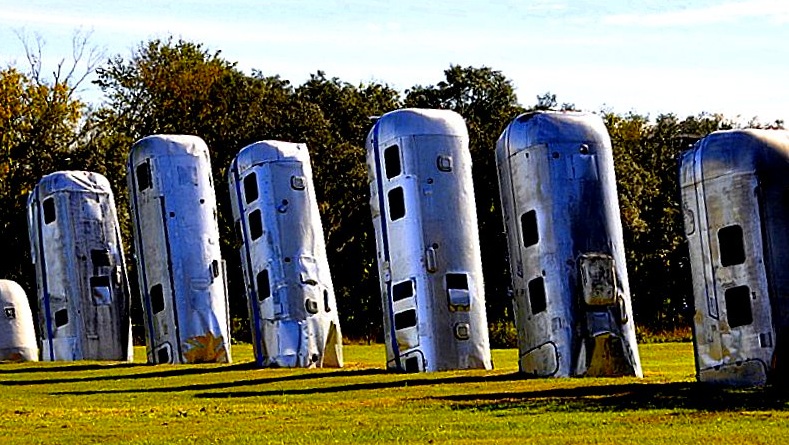 Picture of Frank Bates beside one of the RVs 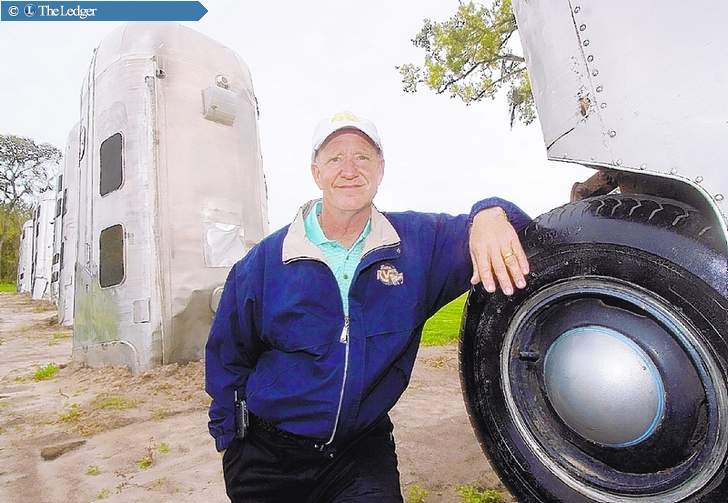 Bates who was originally from Texas and had always enjoyed the Cadillac Ranch made by Stanley Marsh III, came up with the idea during late 2007 which was the 75th anniversary of Airstream Inc. which is a premium RV company. He decided to use this type of vehicle because of their aesthetic appeal. He already had two Airstreams that he and wanted to find nice quality ones for the others but settled for six other Airstreams that he bought from a junkyard. He also wished to have one from each decade but instead has them dating from 1957 through 1994.Their sizes range from 16 to 34 feet. In January of 2008 the workers spent two days using a backhoe and a crane to bury the trailers nose first slightly tilted with their good sides facing the highway. They are buried 6 to eight feet deep. Shortly after burying the first few the event began to get the media’s attention as well as the local authorities.

The authorities ordered the Bates to take it down and he was to be charged 100 dollars a day till it was done. Bates was not satisfied with this decision. More than 10,000 visitors had signed a petition at Bate’s dealership. He also had several letters from local art colleges vouching for him. This still wasn’t enough. He took the issue to the Hillsborough circuit court and the three judges said that the county officials didn’t have enough evidence that the proved the display was a nuisance. In result, they reversed the decision of the fines that had added up to $7,800.

The exhibit has drawn visitors all across the world as far as Japan. It has been featured in a country music video and was also a backdrop to a fashion show. There are also shirts and postcards. Even though the display is quite stunning, one regret of Bate’s is that he put the good side of the RVs facing the highway. This may sound sensible but the sun shines from the other side and when photographers come to get they tend to shoot on the bad side because the lighting is better. In the future, Bates hopes to replace the more dented RVs with better ones. Students from the Tampa Bay Technical High School have offered to landscape and install lights to the trailers so that the display can shine all night.