Fort George, located in Castine, Maine, was built by the British Navy during the American Revolution. They constructed the fort in 1779 and then abandoned it only five years later. It became the site of an unsuccessful siege by the American Revolutionary forces. The British forces did reestablish Fort George for a short time during the War of 1812. The fort is a basic, square-shaped structure about 200 feet long on any side. Today, all that remains of the fort are the earthen palisades and some rebuilt walls. There is a small park on the site featuring a display canon, interpretive panels, and a playing field. It was listed on the National Register of Historic Places in 1969.

Some of the rebuilt walls at the fort 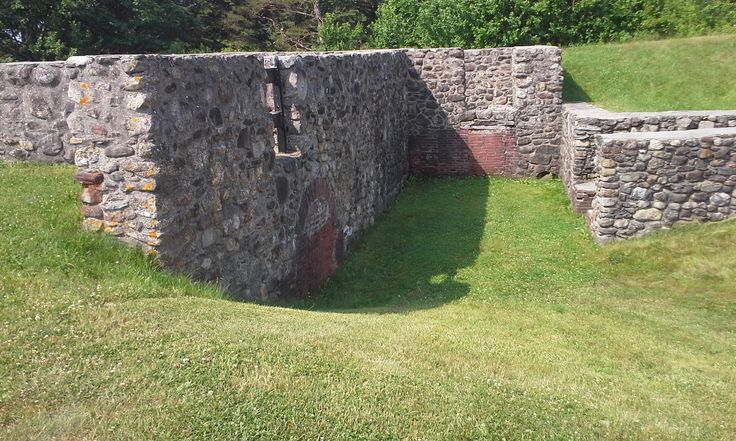 The fort was made of earthen walls, roughly 200 feet on each side 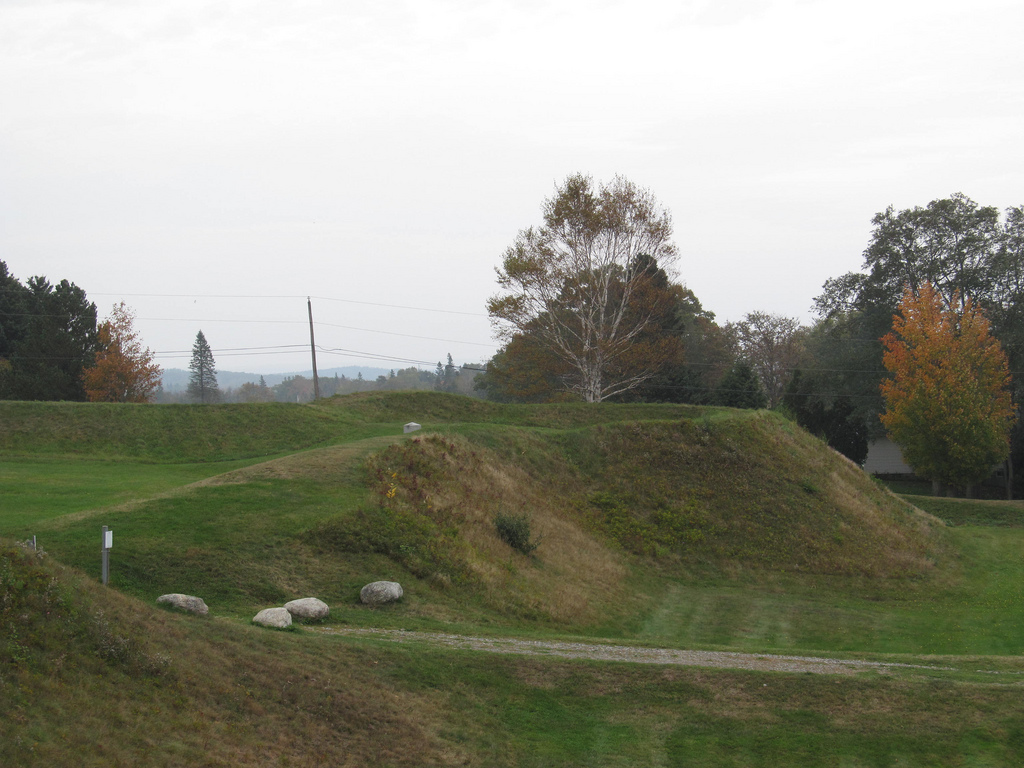 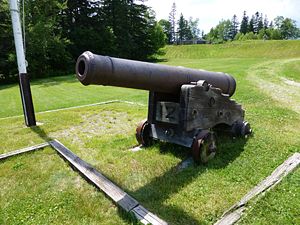 The site of Fort George was settled by various explorers at earlier times in history. The Dutch landed there twice, the Spanish once, as well as many English explorers of the New World, including Captain John Smith and Miles Standish.  In 1779, during the American Revolution, the British forces sent a contingent to the area to build a fort.  The fort was built on the highest point of the peninsula facing out into Penobscot Bay. The strategy behind constructing Fort George was to protect the British interests in the Bay of Fundy and Nova Scotia by sea, profit from customs duties collected from ships sailing up the river, and to prevent enemy land action against lower Canada.

The British naval forces that arrived in June 1779 to begin construction were led by General Frances McLean and Captain Henry Mowatt. They brought 750 land forces and 3 sloops of war with them. When the Americans learned that the British had started construction on a fort at the entrance to Penobscot Bay, they established a band of soldiers to take it over. This fort would cut off the Boston merchants from one of their best sources of lumber – an economic catastrophe. Over a month after the British arrived, Commodore Dudley Saltonstall and Brigadier General Solomon Lovell of the American forces led a contingent of 37 ships equipped with 328 guns and 2,000 men. Unfortunately, the soldiers that were put together for this mission were largely inexperienced.  Almost 1,500 of them were pressed into service. The Penobscot Expedition’s (the largest amphibious expedition of the war) plan of attack was made by civilian men.  The leaders refused to work together, the troops had received inadequate training, and these factors led to considerable delay. The British successfully defended the fort. The Americans, however, suffered a humiliating defeat at this stage of the Revolution.

By the time it was over, two of the leaders were court-martialed. Commodore Saltonstall was tried aboard the Frigate Deane and subsequently dismissed from service.  Paul Revere, the famous Bostonian who warned of the British advance at the very beginning of the Revolution, was one of the men whose reputation was tarnished by military charges of disobedience and incompetence.

The British evacuated Castine in January 1784 and abandoned Fort George. Thirty years later, they re-occupied the site for a short time during the War of 1812.   This time, the British held down the fort without any opposition from the American forces. They were able to collect customs duties from the ships traveling through the Bay and when the war was over, they took all of the money with them.  The fort was abandoned a second time in April 1815 and later destroyed by the town. In 1940, the state of Maine acquired the property. Researchers began archaeological and historical examinations at the site and found numerous artifacts from the war and even earlier periods. Parts of the fort were restored in the early 1960s. Today, the remains of Fort George are used as a park and playing field by local residents.

History of Castine. Castine, Maine: Under the Elms and By The Sea. Accessed November 05, 2017. http://castine.me.us/welcome/history/history-of-castine/.

A Short History of the Penobscot Expedition. Accessed November 05, 2017. http://penobscot1779.tripod.com/PE%20history.htm.