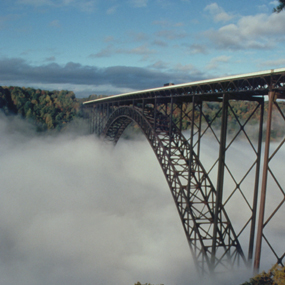 View of the bridge from the bottom of the New River Gorge. 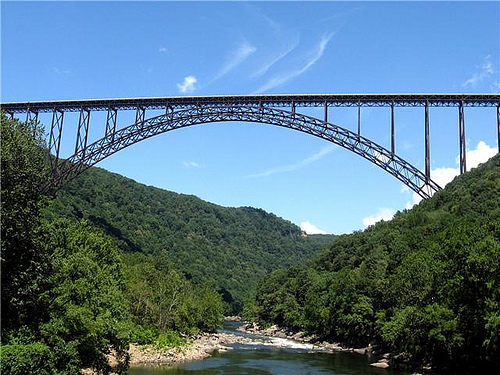 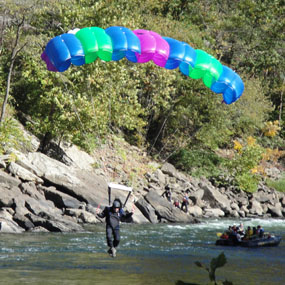 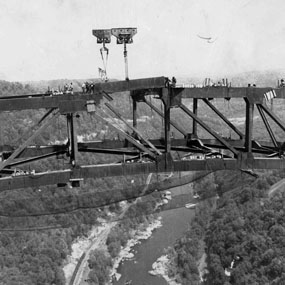 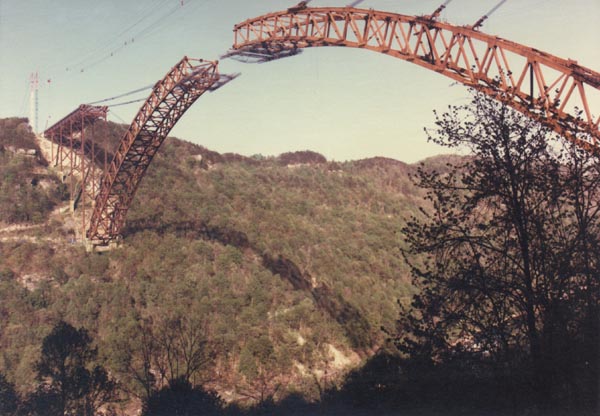 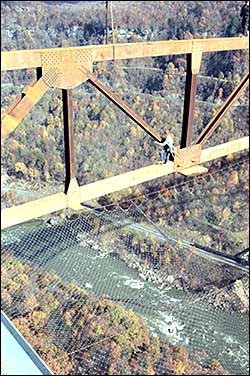 Iron Men of the Gorge is a documentary that focuses on the ironworkers who constructed the New River Gorge Bridge. 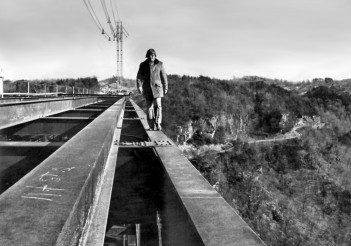 An overlook that let visitors view the progress of construction. 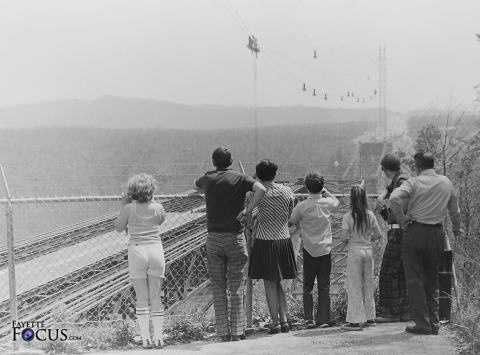 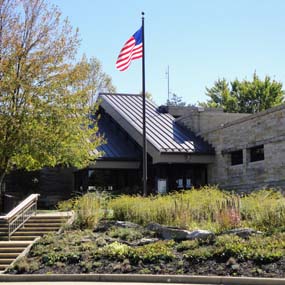 Fayette County first announced the need for a bridge that would span the New River Gorge in the mid-1950s. However, construction did not start until nearly a decade later. In 1963, the President’s Appalachian Regional Commission (PARC) prepared a plan to expand economic development in Appalachia upon request of President Kennedy. After their research, PARC determined that economic growth would not prosper in the Appalachian region without the installation of a modern highway system. The Appalachian Development Act of 1965 created the Appalachian Regional Commission, the Appalachian Development Highway System, and made plans for a highway system that would bring economic development to rural areas and make them more accessible. A key component of the new highway system was Corridor L, now known as U.S. 19, a 70-mile connector between I-79 in Sutton, WV, and I-77 in Beckley, WV. A major obstacle in creating Corridor L was determining how to span the New River Gorge. One initial idea was to construct a four-lane highway that descended one side of the gorge and ascended the opposite, but this project proved to be too costly and was eliminated.

After the decision was made to construct a “mammoth” bridge to span the New River Gorge, the West Virginia State Road Commission hired Michael Baker Jr. Inc. to design the 11-mile section of Corridor L that would include the bridge in 1967. The company proposed three bridges: a suspension bridge, a truss, or a steel arch bridge, and all options depended upon the selection of the final location. Baker proposed nine different routes and two possible bridge locations before deciding based on cost, design, and the effect it would have on the area.

“A suspension bridge would have been 2,000 to 3,100 feet long, well within an economical range for such bridges. But this type [of] structure was ruled out, for the bridge towers, which would rise 300 to 350 feet on top of the mountains on each side of the gorge, would have posed a hazard for aircraft. A truss bridge with eight spans was technically feasible. But this scheme was ruled out because: in this setting, it wouldn’t look good; it would require extremely high piers, very expensive to construct; and erecting the trusses in-place, by cantilevering out from individual piers would be difficult, requiring hoisting of steel from railroad cars along the river to heights up to 900 feet. Thus it seemed the best solution would be a steel arch bridge (the span was much too long to even consider using a concrete arch).”[1]

The time Baker spent designing the steel arch bridge was estimated to equal one person working full time for 15 years. In 1971, designs were completed, though the contract was not awarded to United States Steel Corporations’ American Bridge Division (ABD) until June 21, 1973. The total cost of the contract was thirty-four million dollars. This was the West Virginia Department of Highways’ largest project in history in terms of cost and development. Construction on this section of Corridor L officially began in the summer of 1973. Construction over deep ground voids left behind by previous coal mining was aided by below-ground cameras, while industrial plants in Pennsylvania and Indiana were preparing steel for the bridge. ABD established a rail line nineteen miles away in Nallen, WV to transport the steel because the proposed site for the bridge was so remote and the path was so treacherous that equipment could not yet access the location. Most of the heavy COR-TEN steel members were transported via rail to the bottom of the gorge and then hoisted up by a cable system.

Ironworkers were hired in February 1974, and the construction of the concrete support for the bridge’s vertical columns began. In the same month, the project went aerial as a helicopter strung four 5,000-foot, half-inch wide cables from the towers constructed on each side of the gorge. Additional cables were installed until each of the four cables were three inches in diameter; overall, twenty-two miles of cable were used. Trolleys that traveled at 195 feet per minute were mounted on the cables to transport steel beams. Safety precautions such as handrails, ladders, safety belts, nylon safety nets, and chain link fences were installed as construction continued throughout the rest of the year. In June of 1974, the first support column was formed and was ninety-eight feet high. By mid-July, the northern approach of the bridge extended out 325 feet.

On July 28th, 1974, ABD began construction on the actual arch of the bridge by installing the first 60-foot long chord. The original estimated completion date was scheduled for the fall of 1976, however the date was pushed back due to weather and other delays. In the spring of 1976, only one piece of steel was missing to form the self-supporting arch; the final piece was installed in May of 1976. By June, ironworkers were installing the last major trusses that would carry Corridor L; these trusses were designed with open webs to move with the wind. In November of 1976, the final truss was installed, and was decorated with the state U.S. Bicentennial flags and an evergreen tree. The bridge was finished with a concrete parapet and rails that run along each side.

On October 22nd, 1977, the New River Gorge Bridge opened as spectators from West Virginia and surrounding states gathered to walk the new bridge. The Charleston Gazette was set up on the middle of the bridge and handed out 10,500 scroll certificates to the first patrons. A mobile post office was set up so that visitors could buy souvenirs and send post cards to remember the event, with more than 10,000 special issue stamps sold. Governor Rockefeller spoke at the one and a half hour event about how the new bridge would only bring positive things to the area. When the New River Gorge Bridge opened, Corridor L was not complete. However, traffic along the route increased 140% afterwards and Corridor L was completed in 1978.

The third Saturday of every October, the New River Gorge Bridge is closed to drivers so that spectators can walk the entire width of the gorge and watch skydivers plunge off the bridge. This is done in celebration of the first-time patrons that walked across the bridge in 1977. The event is known as Bridge Day and is a huge annual gathering that brings people from all over the world to Fayette County to explore the New River Gorge.