El Quartelejo, a pueblo constructed by the Taos Indians in the 1600’s, served as a place of refuge in the Kansas plains. Since its construction, three different groups have fled there including the ill-fated Villasur Expedition. Fire likely destroyed the willow and brush mud- covered roof and supporting adobe walls. Today, only a mound and irrigation ditches remain to tell the tale of El Quartelejo, the northernmost pueblo ruin in the United States.

Today, only the stone outline remains of El Quatelejo, a structure built of adobe without doors and windows. Archaeological evidence suggests that the pueblo was destroyed in a fire. 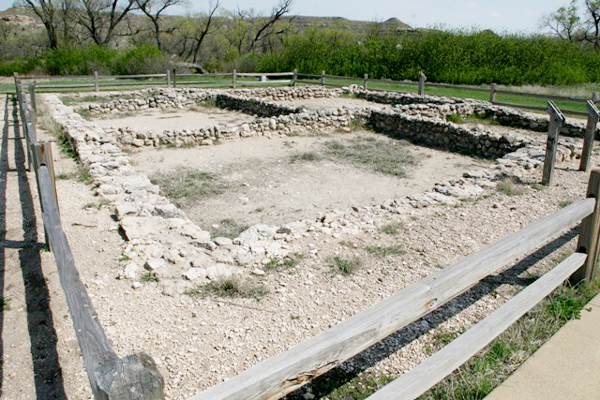 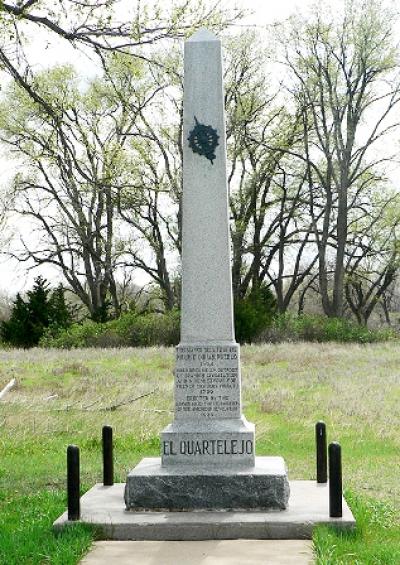 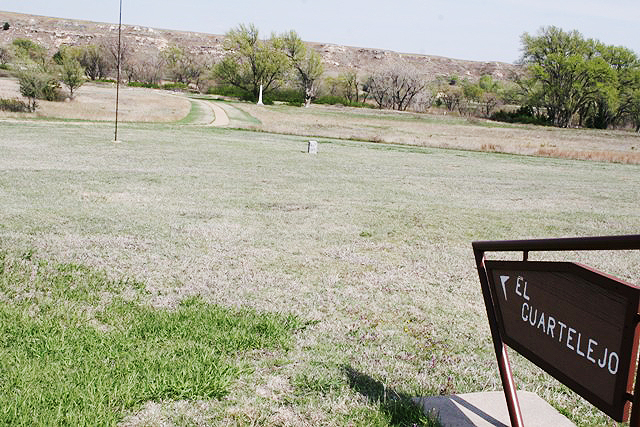 The Taos Native Americans fled from Spanish oppression to present-day Scott County State Park. There, with the resident Plains Apache Native Americans, they constructed a pueblo and utilized a near-by spring with irrigation ditches to cultivate crops in the 1600’s. According to recent archaeological surveys, the outside walls measured between eighteen and twenty inches thick. The seven interior rooms varied in size from ten feet by fourteen feet to sixteen by eighteen feel. In total, the pueblo walls measured thirty-two feet by fifty feet. The lack of window and door evidence helped leading experts classify the dwelling as a pueblo ruin. Small paired post holes located in the corners of most rooms indicate that residents climbed through openings in the roof using ladders to enter and exit. In about 1701, a group of Picuris Native Americans joined the Apache for ten years until Juan de Ulibarri returned them to New Mexico.

Worried that the French were turning the Native Americans against them, in 1720, Pedro de Villazur led 100 men to camp at El Quartelejo. The ill-fated Spanish expedition didn’t return to the refuge of El Quartelejo; instead, most men laid dead one hundred fifty miles to the north. After reaching eastern Nebraska, Villasur’s attempts to negotiate with the Pawnees escalated to a crisis after only two days. The expedition fled to modern-day Columbus, Nebraska, fifty miles to the north. That night Villasur dismissed sentries reports of noises in the dark, only ordering some Pueblos to look around. A band of Pawnees and Otoes attacked the groggy Spanish on August, 13, 1720, in the early morning hours. Most of the Pueblos, relatively accustomed to such events that are typical in the Native American world, escaped. The sleepy Spanish were not so lucky. In the end, forty-five of the expedition were left dead in Nebraska; only thirteen soldiers and one settler, all seriously wounded, retreated. Many speculate that the Pawnees and Otoes were acting under French direction.

The Spanish considered making El Quartelejo a military outpost, but never executed their plan. In 1727, French traders settled in El Quartelejo. A few years later, the settlement was abandoned after the Commanche, Ute, and Pawnee Native Americans attacked, causing the Cuartelejo Apache to leave the Plains.

Vacated, the structure deteriorated and disappeared, leaving only traces of its existence. Archeologists later found abundant charcoal, burned tools, adobe and charred corn, indicating that El Quartelejo was destroyed by fire. In 1889, archaeological excavations discovered that the ruins of El Quartelejo were characteristic of Plain Apaches Native Americans. This identified the site as the historic El Quartelejo found in Spanish and Native American records. In 1970, the Kansas State Historical Society executed additional archaeological investigations, established interpretive markers and opened it to the public. The Kansas D.A.R. (Daughters of the American Revolution) currently holds the deed to the site. Four granite stones mark the corners of this historic landmark today.

**Interestingly, the Spanish spell this landmark as “El Cuartelejo;” the English spelling is “El Quartelejo.” Both spellings are correct and are used interchangeably.