Detroit's first African-American church, for 29 years Second Baptist served as the leading Underground Railroad station during the mid-19th century. The church offers tours with an appointment. 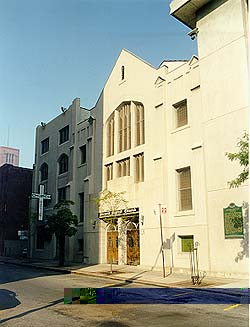 "Second Baptist Church, featuring subdued Gothic elements, was constructed in 1914 to replace an earlier church building. It continues to house Michigan's first African American congregation. The congregation was established in 1836, when 13 former slaves decided to leave the First Baptist Church because of its discriminatory practices. The church quickly became involved in the period's most bitter dispute--slavery. First meeting at a hall on Fort St, the congregation moved to the present location in 1857. Just miles away from the freedom that the Canadian border offered to escaped slaves, the church soon became a stop on the Underground Railroad. Its leaders helped form the Amherstburg Baptist Association and the Canadian Anti-Slavery Baptist Association, both of which supported abolitionism. These organizations aided the ever-increasing number of fugitive slaves fleeing north, both spiritually and materially. Significant figures in the abolitionist movement were associated with the church, such as Soujourner Truth, John Brown, and Frederick Douglass. Douglass discussed abolition with Second Baptist leaders before addressing citizens at the church 1859.

The church's activism was not limited to slavery, however. In 1843 and in 1865, it hosted a "State Convention of Colored Citizens" to petition the Michigan government for Negro Suffrage. After the Civil War, the church played a vital role in helping thousands of migrating freed slaves in securing homes and jobs in and around Detroit. The present Second Baptist Church building replaced the Congregation's first church which was destroyed by fire in 1914. Two additions, one in 1926, and a second in 1968, flank either side of the building and testify to the congregation's continued vitality. The Second Baptist Church today remains, as it has been throughout its history, a source of inspiration and encouragement to its members and neighbors."1

This entry has been edited 0 times.