Albert Einstein visited Lincoln University in 1946 and delivered a speech that included sharp criticism of racial segregation. "The separation of the races is not a disease of colored people," the Nobel Prize-winning physicist declared, "it is a disease of white people. I do not intend to be quiet about it."

Einstein teaching a physics course at Lincoln University, a HBCU in Pennsylvania. 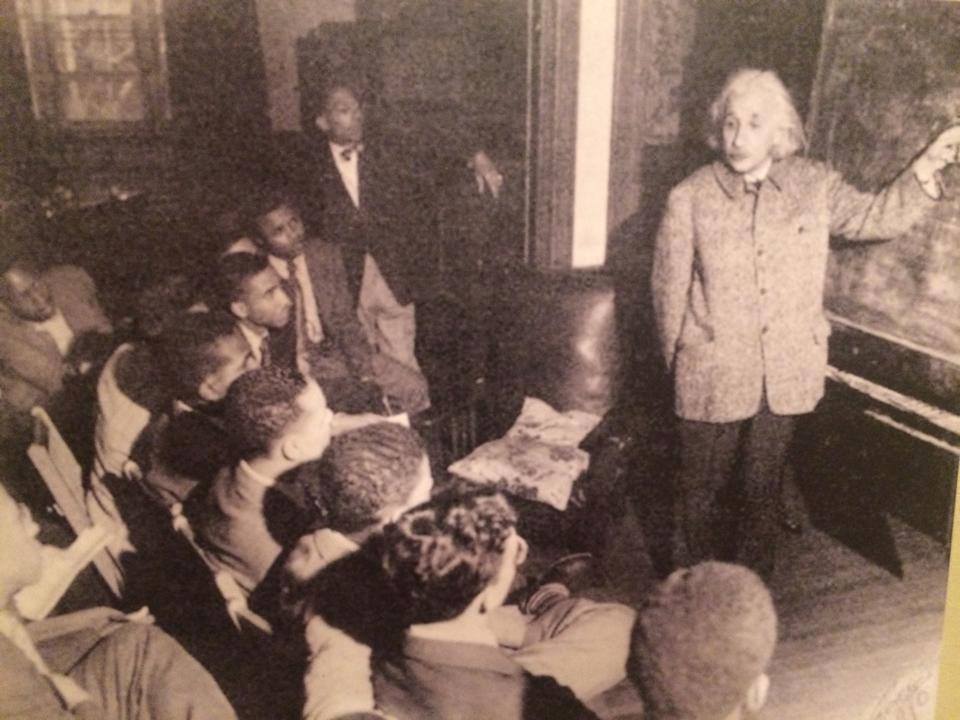 The Harvard Gazette covered the speech and mentioned that Lincoln was the alma mater of Langston Hughes and Thurgood Marshall. He also received an honorary degree and gave a lecture on relativity to Lincoln students.

Einstein’s visit to Lincoln is not well-known largely because it was virtually ignored by the mainstream press even though they regularly covered Einstein’s speeches and activities. However, the black press gave extensive coverage to the event. Unfortunately, there is no mention of the Lincoln visit in most of the major Einstein biographies or archives.

In fact, many significant details are missing from the numerous studies of Einstein’s life and work, most of them having to do with Einstein’s opposition to racism and his relationships with African Americans.

That these omissions need to be recognized and corrected is the contention of Fred Jerome and Rodger Taylor, authors of “Einstein on Race and Racism” (Rutgers University Press, 2006). Jerome and Taylor spoke April 3 at an event sponsored by the W.E.B. Du Bois Institute for African and African American Research. The event also featured remarks by Sylvester James Gates Jr., the John S. Toll Professor of Physics, University of Maryland.

According to Jerome and Taylor, Einstein’s statements at Lincoln were by no means an isolated case. Einstein, who was Jewish, was sensitized to racism by the years of Nazi-inspired threats and harassment he suffered during his tenure at the University of Berlin. Einstein was in the United States when the Nazis came to power in 1933, and, fearful that a return to Germany would place him in mortal danger, he decided to stay, accepting a position at the recently founded Institute for Advanced Study in Princeton, N.J. He became an American citizen in 1940.

But while Einstein may have been grateful to have found a safe haven, his gratitude did not prevent him from criticizing the ethical shortcomings of his new home.

“Einstein realized that African Americans in Princeton were treated like Jews in Germany,” said Taylor. “The town was strictly segregated. There was no high school that blacks could go to until the 1940s.”

Einstein’s response to the racism and segregation he found in Princeton (Paul Robeson, who was born in Princeton, called it “the northernmost town in the South”) was to cultivate relationships in the town’s African-American community. Jerome and Taylor interviewed members of that community who still remember the white-haired, disheveled figure of Einstein strolling through their streets, stopping to chat with the inhabitants, and handing out candy to local children.

One woman remembered that Einstein paid the college tuition of a young man from the community. Another said that he invited Marian Anderson to stay at his home when the singer was refused a room at the Nassau Inn.

Einstein met Paul Robeson when the famous singer and actor came to perform at Princeton’s McCarter Theatre in 1935. The two found they had much in common. Both were concerned about the rise of fascism, and both gave their support to efforts to defend the democratically elected government of Spain against the fascist forces of Francisco Franco. Einstein and Robeson also worked together on the American Crusade to End Lynching, in response to an upsurge in racial murders as black soldiers returned home in the aftermath of World War II.

The 20-year friendship between Einstein and Robeson is another story that has not been told, Jerome said, but that omission may soon be rectified. A movie is in the works about the relationship, with Danny Glover slated to play Robeson and Ben Kingsley as Einstein.

Einstein continued to support progressive causes through the 1950s, when the pressure of anti-Communist witch hunts made it dangerous to do so. Another example of Einstein using his prestige to help a prominent African American occurred in 1951, when the 83-year-old W.E.B. Du Bois, a founder of the NAACP, was indicted by the federal government for failing to register as a “foreign agent” as a consequence of circulating the pro-Soviet Stockholm Peace Petition. Einstein offered to appear as a character witness for Du Bois, which convinced the judge to drop the case.

Gates, an African-American physicist who has appeared on the PBS show Nova, said that Einstein had been a hero of his since he learned about the theory of relativity as a teenager, but that he was unaware of Einstein’s ideas on civil rights until fairly recently.

Einstein’s approach to problems in physics was to begin by asking very simple, almost childlike questions, such as, “What would the world look like if I could drive along a beam of light?” Gates said.

“He must have developed his ideas about race through a similar process. He was capable of asking the question, ‘What would my life be like if I were black?’”

Gates said that thinking about Einstein’s involvement with civil rights has prompted him to speculate on the value of affirmative action and the goal of diversity it seeks to bring about. There are many instances in which the presence of strength and resilience in a system can be attributed to diversity.

“In the natural world, for example, when a population is under the influence of a stressful environment, diversity ensures its survival,” Gates said.

On a cultural level, the global influence of American popular music might be attributed to the fact that it is an amalgam of musical traditions from Europe and Africa.

These examples have led him to conclude that “diversity actually matters, independent of the moral argument.” Gates said he believes “there is a science of diversity out there waiting for scholars to discover it.”"