Tyler Municipal Rose Garden is the signature attraction of the city. The park covers over 20 acres and is home to over 600 varieties of roses. Established in 1952, it contains the largest public collection of roses in the United States. The garden and Rose Festival eventually marked Tyler as the "Rose Capital" of the South.

The garden was founded in 1952 and contains the largest collection of roses in the country. 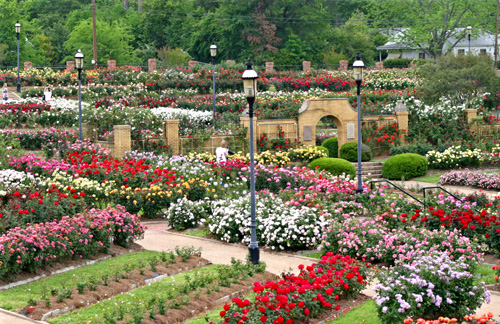 The land that is now Tyler Municipal Rose Garden was first purchased by the city of Tyler in 1912. President Roosevelt funded the construction of the Tyler Rose Garden in 1939. Henry Thompson, who had studied flora culture and landscape architecture at Cornell University, was chosen by locals in Tyler to design the garden. Construction of the garden was put on hold in 1941-1045 due to World War II.

Henry Thompson served in the military as a fighter pilot, and died while serving in December 1942. In 1946 Thompson's work was continued by the superintendent of Tylers Parks and Recreation Department, Bob Shelton. Shelton, along with the help pathologist Dr. Elden Lyle, revised Thompson's design and were able complete the garden by 1952.

Today, the garden has more the 600 varieties of roses and over 32,000 bushes. The garden is free to all to see.