East Lynn Lake began as a flood control project in 1938 in response to the historical Flood of 1937. However, construction did not begin until 1969/70. Today, East Lynn Lake not only helps with managing flood water but also serves as a site for outdoor recreation and wildlife management. 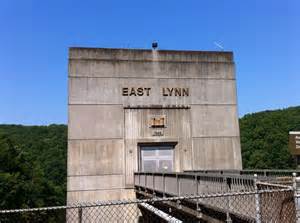 East Lynn Lake began as a flood control project in 1938 in response to the historical Flood of 1937; however, construction did not begin until 1969/70. Land owners whose lives would be impacted by this project protested and fought against the creation of a flood control dam. Family homes and gravesites would have to be moved to pave the way for the U.S. Army Corps of Engineers to construct a dam to control flooding in Wayne County. The East Lynn Lake project included 24,832 acres of water and surrounding land, 22,928 of which is managed by the West Virginia Department of Natural Resources for Fish, Wildlife, and Forestry Management1.

Although the sole purpose of construction was to control flooding, the lake itself became well known for its amenities. A campground was constructed for visitors to come and enjoy the wildlife in southern West Virginia. Visitors can camp on the East Fork of Twelvepole Creek, and are provided with access to boating, water-skiing, fishing, hiking, and picnicking. There are a total of 166 camping sites that are available with electrical or water hookups. Showers and dump stations are available for campers. Some sites, located deeper into the mountains, give the guest a more primitive experience of camping. Families can sit around the fire pits and have cookouts on the grills that are provided. At any time of the day you can smell the firewood burning from the gathering that happened the previous night.

Children are accommodated by several modern playgrounds, basketball courts, volleyball courts, and biking areas. The paved roads are perfect for families to take a leisurely bike ride throughout the different campsites. There are also many hiking/mountain biking trails for the adventurous campers who wish to see the wildlife up close. Shelters are available to be rented for parties, reunions, etc. Most shelters are close to playgrounds and also bathroom facilities. Campers can also take their paddle boats and canoes into the water for hours of self-guided exploring of the backwaters of East Lynn.