Radio City Music Hall is an entertainment venue located in the Rockefeller Center in New York City. Its nickname is the Showplace of the Nation, and for a time, it was the leading tourist destination in the city. In fact, the building's interior was declared a city landmark in 1978. The Music Hall holds concerts, film premieres, stage shows, and other special events for the public. Visitors can also receive tours of the building for those who want to go behind the scenes.

A frontal view of the legendary theater. 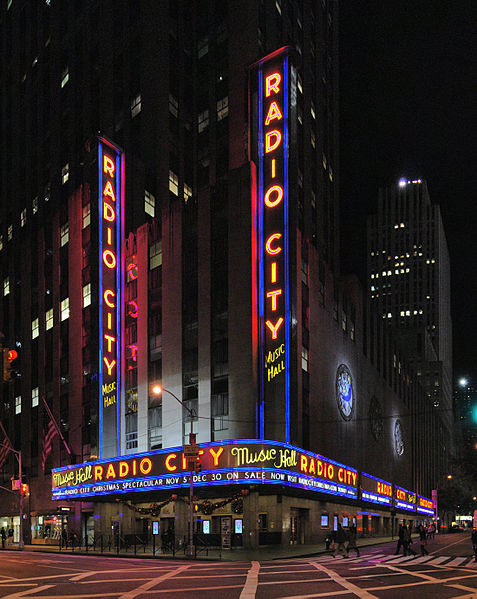 Holding the record as the largest indoor theatre in the world, Radio City Music Hall has held many entertainment events for the public since 1929. With over 300 million visitors since opening its doors, this block-long theatre has become one of the greatest venues for performers. The architectural construction of this building is breathtaking to the eye, with 84 foot high ceilings, choral staircases, and no columnns to block the audience's view, every seat in the theatre provides a spectacular view. Made up of three different sections, the stage is considered to be one of the most equipped stages in the world. The sections are mounted on hydraulic-powered elevators to make set changing easier for the performers. The orchestra is also operated by an elevator that can be raised and lowered when needed.

Though many people know Radio City Music Hall is a legendary attraction, most people do not know the history of how it started. After the stock market crashed in 1929, John D. Rockefeller, owned a piece of property in midtown Manhattan worth over $91 million. Many plans were discussed to build a new Metropolitan Opera House on the site, but the collapse of the economy would make building this site impossible. Even though the economy was in rough shape, Rockefeller made a rational decision that would impact the city forever. He made the decision to build a whole complex of buildings so spectacular they would have to grab the attention of commercial tenants and inspire people to push through the economic crisis.

Rockefeller paired up with the Radio Corporation of America, an NBC radio program that was very popular throughout the area. S. L. “Roxy” Rothafel, a theatrical genius, brought RCA and Rockefeller together. Rothafel was known for bringing struggling theatres into the spotlight. RCA, Rockefeller, and Rothafel all worked together to develop a plan for a theatre more spectacular than any other in the world. The first part of the completed complex was named “Radio City” by David Sarnoff, the head of RCA. This would signal the beginning of Radio City Music Hall which was meant to provide public enjoyment for years to come.

Today, Radio City Music Hall still provides high-end entertainment for millions that come from all over the globe. The prices remain relatively low so that ordinary people can afford to see any of the performers that come to town. With many movie premieres and concerts throughout the decades, Radio City Music Hall has been a source of entertainment for travelers from all around.