Constructed in 1950, the Veterans Memorial Field House was once the premier sports arena and event center for the Huntington area. For decades, the venue hosted most of the city's major concerts, fundraisers, and sporting events, and notably served as the home arena for Marshall University’s basketball team until the Henderson Center opened in 1981. Despite the number and frequency of events held at the Field House, the arena had several financial and logistical problems that contributed to its decline. After the construction of the Henderson Center and the Huntington Civic Center (now Mountain Health Arena), the Field House became increasingly obsolete. Although smaller-scale sporting and other events continued to be held, the venue’s usefulness did not outweigh the cost of much-needed repairs. In 2011, Marshall University acquired the property and demolished the 65-year-old arena. The location of the Veterans Memorial Field House is now the site of Marshall’s soccer stadium.

Aerial view of the Field House from its early days 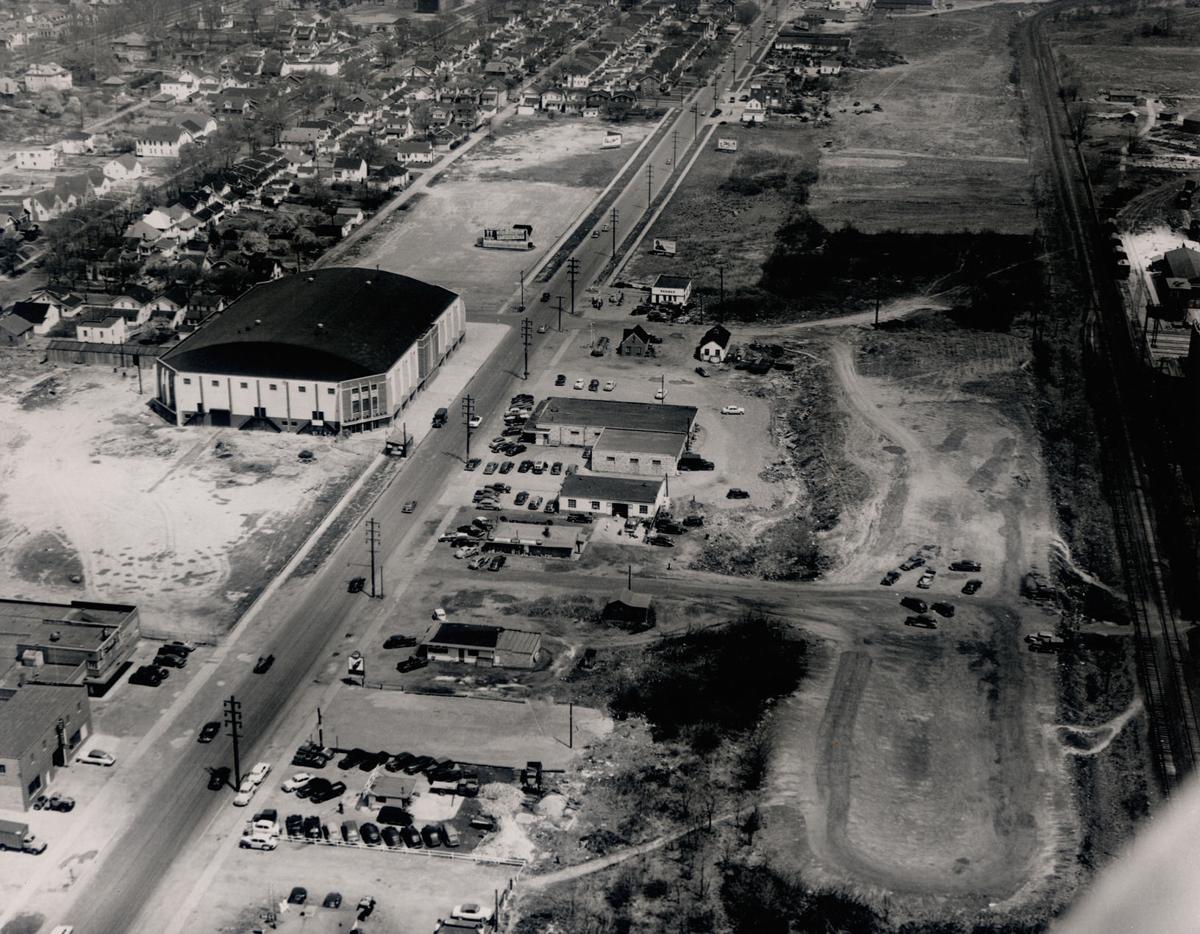 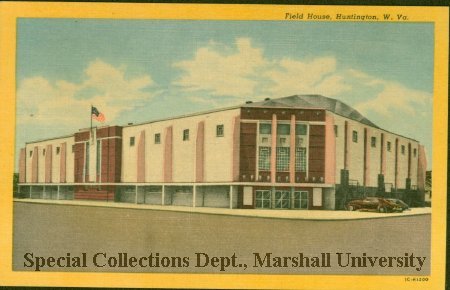 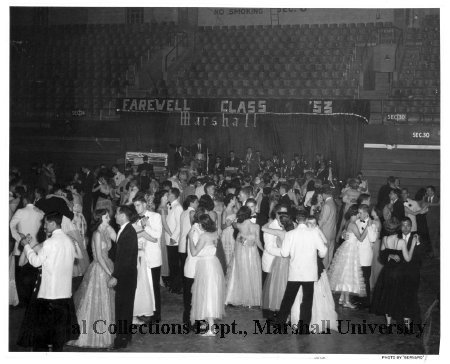 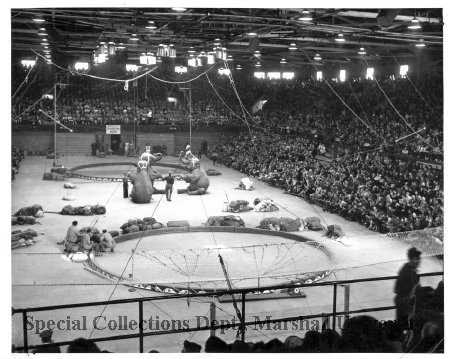 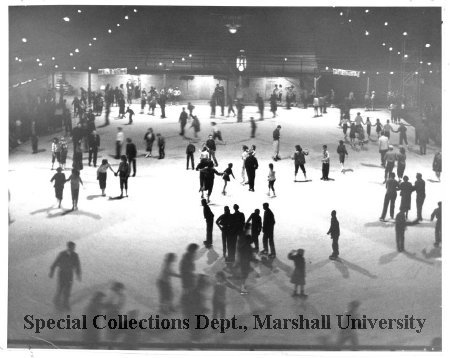 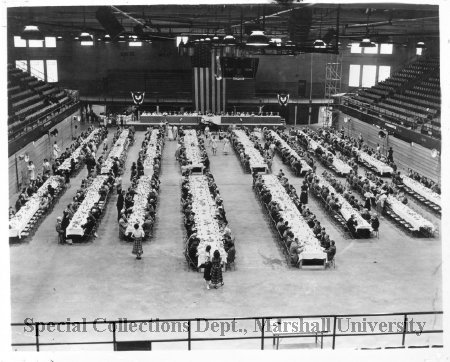 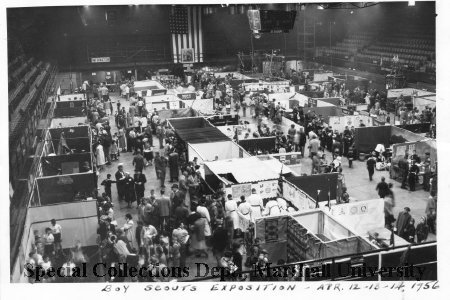 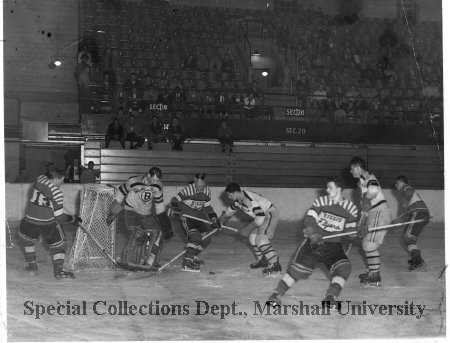 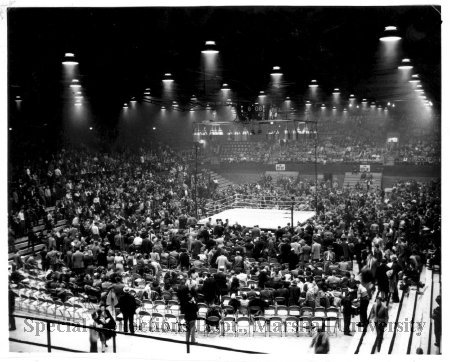 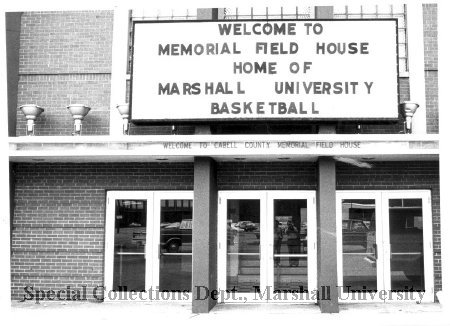 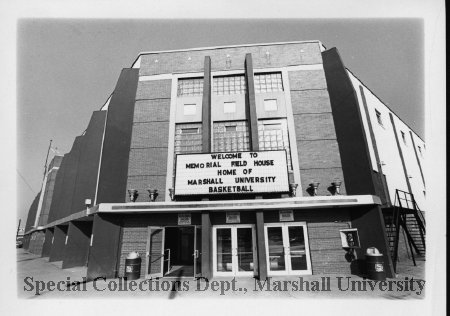 Interior of Memorial Field House after being remodeled, October 1977 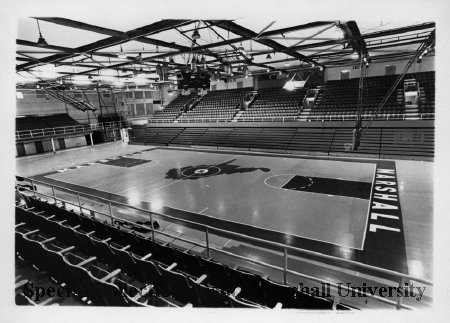 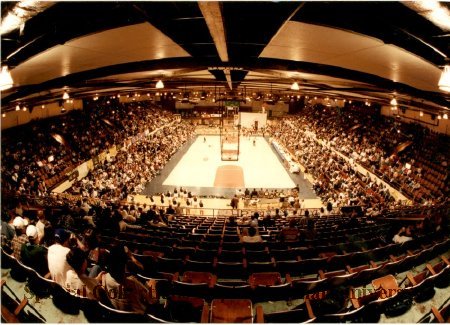 Advertisement for the Big Finale event 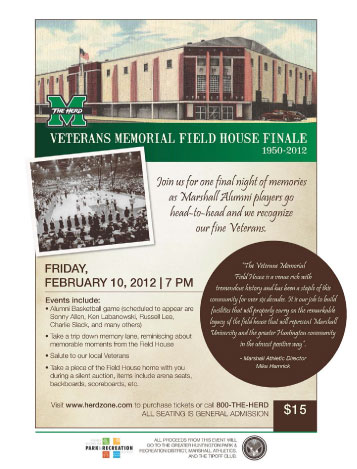 Facade of the Veterans Memorial Soccer Complex, which includes a portion of the Field House's facade 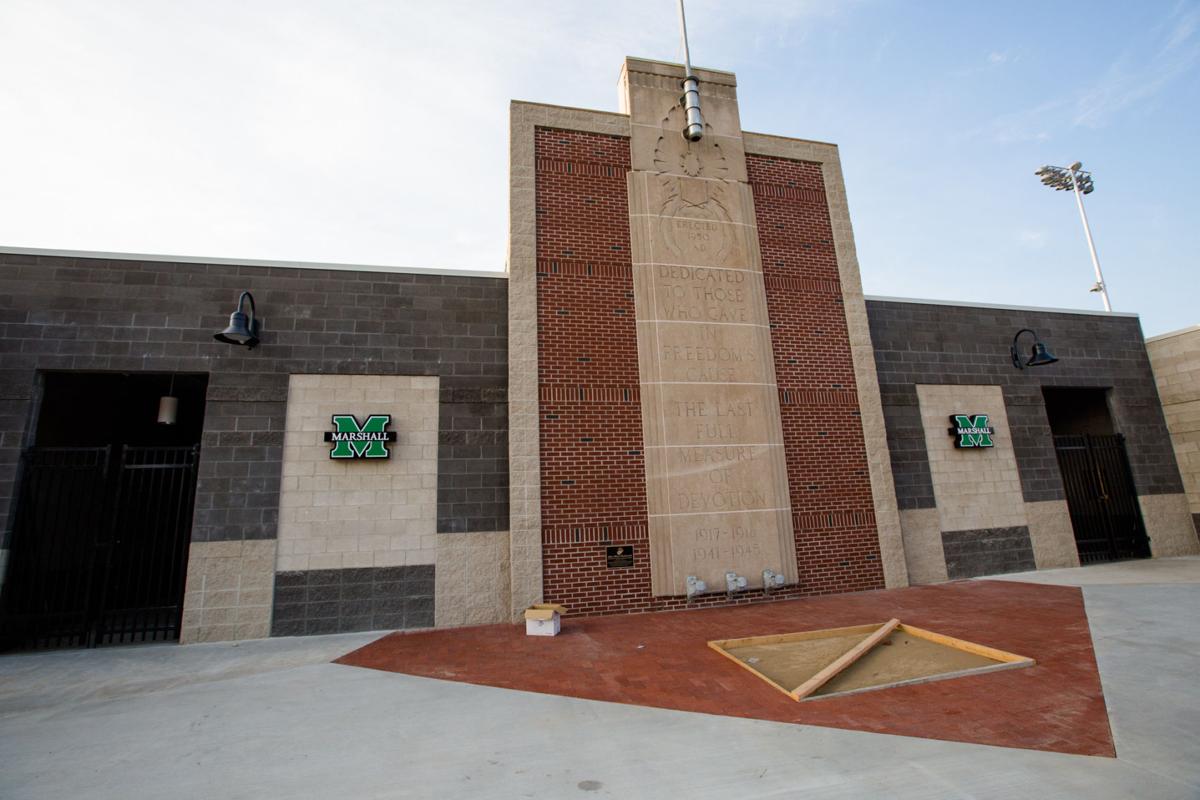 The West Virginia Legislature established the Cabell County Recreation Board in 1945. Originally responsible for overseeing county playgrounds, the board soon had greater ambitions and was determined to give Huntington its own arena. At the time, Marshall University and local high school teams had played basketball at the Radio Center since 1915. In 1947, the Cabell County Recreation Board convinced the Cabell County Court to hire architect Lewis Stettler to design what would become the Veterans Memorial Field House. The arena was constructed at the site of Long Civic Field, where Huntington had played minor league baseball between 1937 and 1942. Completed in November 1950 at a total cost of $1,087,700, the Field House was a massive project to fund. Its inaugural event, the four-day “Holiday on Ice,” began on November 13, 1950. Marshall’s men’s basketball team had its first practice in the Field House on November 28, followed the next day by Huntington High School’s boys’ team. The building was dedicated on November 30th to the memory of Cabell County citizens who had lost their lives during the World Wars. A wall built into the Fifth Avenue side of the structure stated, “Erected 1950 A.D. Dedicated To Those Who Gave In Freedom’s Cause The Last Full Measure Of Devotion—1917-1918, 1941-1945.”

While best remembered for its association with sports, the Field House hosted a variety of other types of events over its long history. During the 1950s, for instance, the arena was the venue for high school commencement ceremonies, ice shows, horse shows, dances, conventions, concerts, Boy Scout expositions, garden clubs, swimming carnivals, and midget automobile races. Notably, the Field House was one of few facilities open to African Americans in Huntington in the 1950s. Along with its basketball games, Marshall University also used the Field House for homecoming and commencement exercises for many years. During the 1960s, many of the most popular events from the preceding decade carried on at the arena, along with a host of exciting new events. In 1962 and 1963, for instance, the Field House hosted the Miss USA World beauty pageant. The Field House also hosted political events, such as the state Republican Convention in 1952 and the state Democratic Convention in 1964. Following the tragic plane crash on November 14, 1970, in which the lives of seventy-five Marshall University football players, coaches, and supporters were lost, a memorial service was held at the Field House the day after the crash. Economic troubles and demographic changes in Huntington during the 1970s led the arena to be used more often as a recreation facility for the community, including the county’s summer recreation program. At the same time, popular events like ice shows and conventions continued to take place at the arena, and concerts for famous performers, such as Seals and Crofts, Olivia Newton-John, and Loretta Lynn were held.

Despite the regularity and variety of events held at the Field House, the arena had a number of issues from its beginning. The enormous cost of its construction and the ensuing maintenance requirements meant that the Field House was on the cusp of bankruptcy from its beginning. The arena also had several logistical issues, such as poor acoustics, no air conditioning, wasteful seating arrangements, and inadequate parking. During the 1970s, business and community leaders began to consider replacing the Field House with a new civic center, as debates arose over whether the arena should function primarily as a commercial enterprise, Marshall’s basketball stadium, or a public recreation center. Ultimately, the city built and opened the Huntington Civic Center - later renamed Big Sandy Superstore Arena, and now Mountain Health Center - in September 1977. In fall 1981, the opening of the Cam Henderson Center dealt another blow to the Field House, as Marshall basketball had comprised a third of the facility’s income.

Once Marshall no longer used the Field House, and as the Huntington Civic Center drew events and performers away from it, the arena entered a gradual decline from which it could not recover. While still used for some activities, the Field House was becoming obsolete for anything other than high school basketball and smaller-scale events. In addition, the county lacked the financial resources to make much-needed repairs to the aging arena, which potentially could have extended its lifetime. Amidst these troubles, ownership of the Field House transferred to the Cabell County Board of Education in 1986, who then turned the arena over to the Greater Huntington Park and Recreation District in 1996. The Field House’s usefulness continued to decline when Huntington and Huntington East high schools consolidated into a new Huntington High in 1995, as the new school’s gym eliminated the need to play basketball off-campus. At this time, although the Field House was not used nearly as much as in its heyday, it continued to host various events, such as circuses, the annual Kiwanis pancake festival, comedy shows, dog shows, boxing matches, and concerts. The Field House also briefly hosted a professional indoor football team, the Huntington Heroes, as well as a county-sponsored roller hockey program.

In April 2011, the Greater Huntington Park and Recreation District passed ownership of the Field House to Marshall University. At the time, the park district was facing the need to make necessary but costly repairs to the facility, including a long-overdue replacement of the roof that would have cost over $1 million. After Marshall took over the site, the university announced a $5.4 million project to demolish the Field House and replace it with a soccer stadium, the Veterans Memorial Soccer Complex. The Field House’s final events were held in early 2012, beginning with the St. Joe Invitational Tournament and followed by the fourth annual Hospice of Huntington Beach Party. The Field House held its last event on February 10, 2012, when eighty former Marshall University basketball players were invited to participate in an alumni game and silent auction of memorabilia from the building. “We all enjoyed it. It is a great building. We have a lifetime of memories. It's just the building has lost its usefulness for us,” explained Rick Meckstroth, former Marshall football player and project manager for the demolition. Following the event, the demolition of the Field House proceeded and the new soccer complex opened on August 23, 2013. As a tribute to the former arena, Marshall preserved one of the building's decorative facades and incorporated it into the facade of the soccer stadium.