The marker on 3rd Avenue offers a short history of Marshall University, which was founded in 1837 as a private subscription school for residents of Guyandotte and surrounding areas. John Laidley, who was a local attorney at the time, hosted the meeting that would lead to the formation of Marshall Academy. Laidley had been a friend of John Marshall, and attendees supported his suggestion to name the school in honor of the fourth Chief Justice of the United States who had recently passed away. Marshall College was West Virginia’s first normal school dedicated to training teachers. We Are Marshall is a moved based off of real events surrounding the Marshall University football team and the plane crash in 1970. The Clio Foundation was developed at Marshall University and it being utilized by institutions all over the United States.

Old Main, which now serves as the primary administrative building, was built on land that was called Maple Grove. 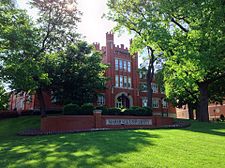 This historic marker is located on south side of 3rd Avenue, just past Harris Hall when walking east. 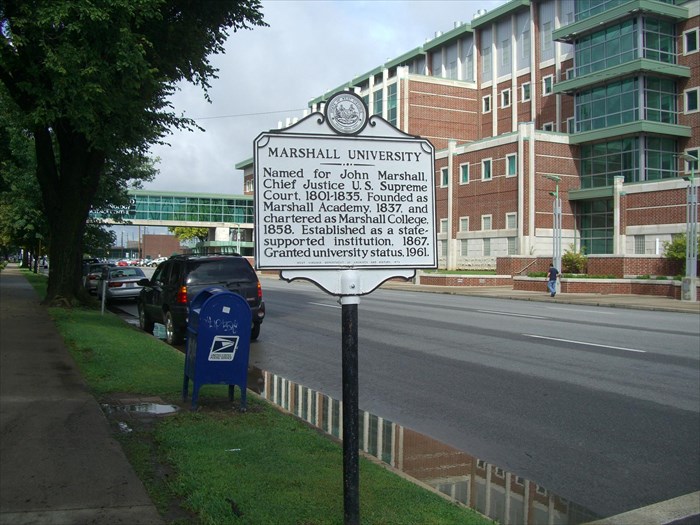 Old Main, which now serves as the primary administrative building, was built on land that was called Maple Grove.

This historic marker is located on south side of 3rd Avenue, just past Harris Hall when walking east.

The original structure on what would eventually become Marshall University’s campus was the Mount Hebron Church, which was a log building that housed various denominations. The log structure was also a subscription school before the local community decided to utilize the building as a better educational facility for the local children. The founders of the new school were John Laidley, James Holderby, and William Buffington. James Holderby originially owned the property that is now Huntington, and sold the land that is now Marshall’s campus to the academy’s trustees for $40.  On March 30, 1838, the institution was formally dedicated by the Virginia General Assembly as Marshall Academy. The original structure of Old Main started construction in 1838, and was completed in 1839. In 1852, the decision was made to add a female department to the academy, and in 1854, expansions to the original structure started so that the male and female students could be taught separately. Virginia stopped funding the school in 1846 and there was little money to complete the additions needed; along with the break out of the Civil War, the additions to the academy were not completed for over ten years.

.The Civil War closed the academy for several years, but reopened as the State Normal School of Marshall College in 1867. This was the first normal school in the new state of West Virginia. The normal school trained teachers and struggled financially for many years, however President Lawerence J. Corbly raised enrollment rates and Marshall began to successfully grow in the early 1900s. The additions that started in the 1850s were completed after West Virginia gained control of the school, and another addition was made in 1870 that provided a dining hall, dormitories, a gymnasium, classrooms, as well as an administration building. The 1870 portion of Old Main is the earliest remaining original structure of the building. Due to growing enrollment rates, another additional building was added to Old Main in 1896. However, the original 1839 and 1856 structures were demolished in 1898 so that a new facility could be built.

The new building was named Normal Hall upon completion in 1898, and was built to be a women’s dormitory. The name was later changed to Ladies Hall, then College Hall in 1902. In 1899, another addition was made to the structure, and was called the Annex. After the completion of the annex in 1899, the structure that is now Old Main housed the Principal’s Office and Reception Room; a Faculty Room; ten Recitation Rooms (now called Classrooms); a Laboratory; a Music Room; an Art Studio; the Study Hall; the Commencement Hall (which also served as the Chapel); the Circulating Library and Reading Room; the [Federal] Documentary Library; the Office of the Principal of the Business Department; two Business Rooms; a Typewriter Room; the Virginia Literary Society Room; the Erosophian Literary Society Room; the Young Women's Christian Association Hall; the College Bookstore; and a number of cloakrooms, bathrooms, and storage rooms.1 However, these additions along with growing enrollment was not enough to house all the students and instructors. The final addition to Old Main was constructed in 1907, however the building was not deemed, “Old Main,” until the late 1930s.

Northcott Hall was built in 1916, and was the first building to be constructed that was not adjoining to the Old Main structure. Northcott was primarily used for science classes, which led to the formation of the Pre-Medic Department of Marshall College in 1920.  In the early years of the department, many of the graduates of the program were accepted into programs at Jefferson College, Richmond, Louisville, Cincinnati, and West Virginia. Northcott was demolished in 1996, and was replaced with the John Deaver Drinko Library. The third building on campus was established to promote physical education, but was damaged beyond repair and was demolished in the 1980s. Marshall greatly improved during the 1930s, even through the Great Depression, with the addition of five buildings; the college president accepted potatoes as a form of payment during the depression so that students could still get their education. In 1938, Marshall was approved to offed master’s degrees in chemistry, education, history, political science, psychology, and sociology.

Many Marshall students served during World War II, and some even gained their military training at Marshall. After the war was over, 500 veterans enrolled in Marshall in 1946; non-coincidentally, the athletic programs greatly improved in the late 1940s and into the 1950s as well. Marshall officially became a university in the late 1960s, and added a men’s physical education facility, a major classroom building and adjoining music hall, four new residence halls including two new cafeterias, the Campus Christian Center, a major addition to the library and renovation of Fairfield Stadium. The 1970s were a time of both loss and growth for Marshall University. The decade began with a tragic plan crash that killed 75 football players, staff, and community members. However, the decade ended with the expansion and growth of campus buildings and programs; the Marshall University School of Medicine was established in 1978. Corbly Hall, the Cam Henderson Center, a fine arts center, and an addition to the Science Building were created in the 1980s.
Today the university has grown to offer degrees from nine undergraduate colleges, and three graduate colleges. Several new facilities have been recently completed all around the Huntington campus. These buildings include: two new first-year student residence halls, a health and recreation center, an engineering lab facility, softball field, and an artificial turf practice field that is open to the public. The Marshall University Foundation Hall, home of the Erickson Alumni Center, finished construction in 2010. In 2013 Marshall began construction on a new indoor practice facility, a new soccer field and the Applied Engineering complex.