Tucked back slightly into the woods and situated along the Susquehanna River in downtown Northumberland, Pennsylvania lies the Joseph Priestley House. Designed by his wife Mary and later designated a National Historic Landmark on January 12, 1965, the Joseph Priestley house served as the home and laboratory of pioneering chemist Joseph Priestley from its completion in 1798 until his death in 1804. Most famous for the discovery of the molecular structure of oxygen in 1774, Joseph Priestley and his wife Mary emigrated to the United States in 1794 after facing intense persecution and political unrest in England. Considered a brilliant scientist Priestley’s views did not align with the societal majority of England at the time. He and many others like him who favored science and had differing religious views were considered religious dissenters. As a result, during the Birmingham riots of 1791 Priestley’s house and church were burned along with others who share the same views, much to the pleasure of King George III. Upon their arrival and subsequent settling in Northumberland, the Priestley’s began construction of the house where it currently stands. Known only as Mr. Jones, a master carpenter from Northumberland helped the Priestley’s bring their idea to light. Designed using the 18th-century Georgian style and accented with Federalist highlights, the house was constructed with simplistic elegance. Built out of a stone foundation and utilizing a wooden frame structure covered with clapboards, the home had to be built out of dried wood which Priestley wrote about in his typical detail. One of the unique features of this house are the mistakes. Due to a lack of skilled labor there are numerous examples of craftsmanship errors throughout the house. For instance, when touring the Joseph Priestley house visitors notice that the main staircase is about a step too short for the hallway. At first glance, it doesn’t look like much until viewed from a small distance, it is only then the visitors can see the distinctive slant at the top of the stairway. On the property stands Priestley’s laboratory which was completed 1797 and was designed and built entirely by him. At the time, it was believed to have been the first “scientifically equipped laboratory” in the United States. It is unique features like this that have made the home a treasured piece of history to the blue-collar town that straddles the Susquehanna. After Mary and Joseph’s death the house remained in Priestley hands until 1811. Over the course of the 19th century the house changed various hands until the last resident moved out of the house in 1911. For a brief period the house was rented to the Pennsylvania Railroad for workers station along the rail line cutting through the town. Over the next few years a series of plans for a museum restoration and even a legislative maneuver to turn it over to the state historical commission never came to fruition. After a brief four-year period were it served as the borough hall for Northumberland it was transferred to the Commonwealth of Pennsylvania in 1961. In October 1970, the museum was officially opened to the public after the start of major restoration project by the Pennsylvania Historical and Museum Commission. The Joseph Priestley house has been the recipient of many national designations since it was acquired by the Commonwealth. In 1965, it was designated a National Historic Landmark and eventually added to the National Register of Historic Places in 1966. The American Chemical Society named it only the second National Historic Chemical Landmark in 1994. After a final restoration project in the late 90s which restored the home to the time when it was occupied by Mary and Joseph Priestley, it has served as a public museum and the pride of the town whose many streets bear its name. 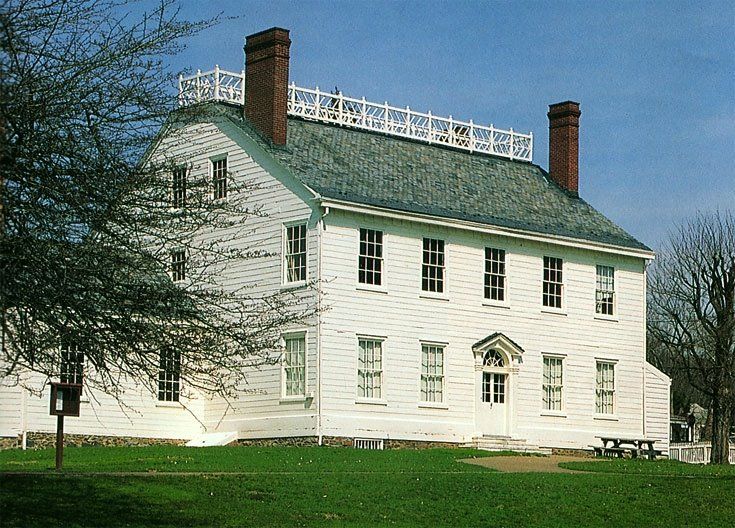 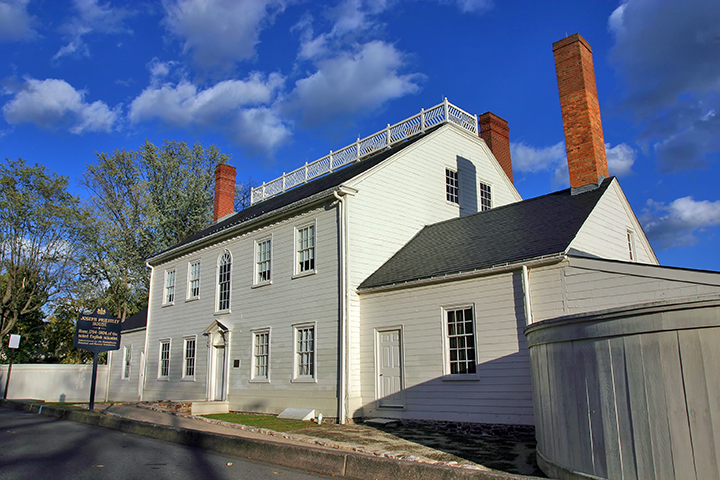 Plaque presented by the American Chemical Society in 1994. At the time it was only the second National Historic Chemical Landmark. 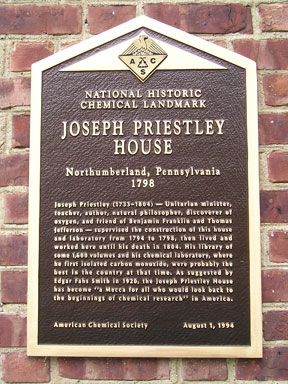 Plaque designating the Joseph Priestley House as a National Historic Landmark. Presented in 1965. 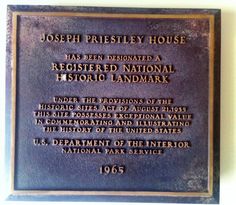 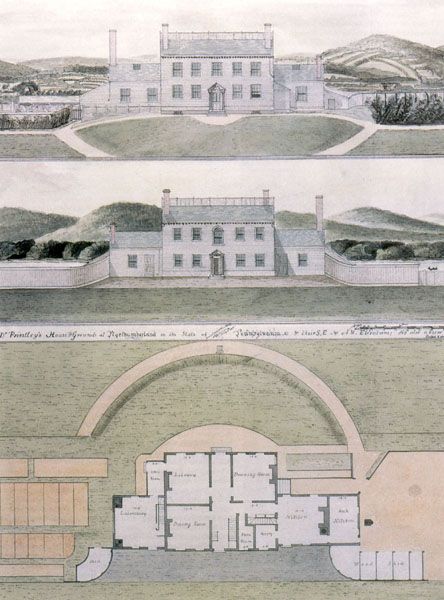 Photo of the main staircase foyer which demonstrates a distinctive slant at the top of the stairway. Due to a lack of skilled labor there are numerous examples of craftsmanship errors throughout the house. 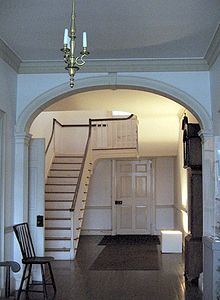 Born in 1733, Joseph Priestley was a prominent 18th-century philosopher, chemist, theologian and political theorist whose tumultuous legacy brought about many scientific discoveries. As a theologist as well as a scientist Priestley held views that commonly merged the two. His attempt to fuse rationalism and theism led to many of his publications being deemed controversial for the time. In addition to Priestley’s views on science and religion he was also an outspoken political philosopher who opined about tolerance and liberal theories, much to the disagreement of society at the time. His religious views aligned with the burgeoning Unitarianism movement also ran counter to the religious viewpoints of not only the society, but also King George III. Over time Priestley’s publications, teaching, and controversial support of the French Revolution led to him being forced to flee in 1791 to the United States following a mob attack on his home and church in Birmingham.

During his life, Priestley spent a great deal of time dedicated to the scientific investigation of several types of “airs”, unknown to the world at the time. Through his extensive work Priestley had significant involvement in the discovery of numerous types of gases. In addition, through his works he had a role in the discovery of the precursor to photosynthesis with his experimentation of plant revitalization within an enclosed air environment. His most famous discovery was what he called at the time “dephlogisticed air” or as we know it now oxygen, O2. Through a process of focusing the sun’s rays on a sample of mercuric oxide, while trapping himself inside of a hermetic environment with only this new air, Priestley discovered that what was inside was purer and better than common air and could have a wide range of use. Over a period of time Priestley refined his studies and started to explore the correlation between blood and air.

Even with this discovery, Priestley remained an outspoken defender of religious dissension, going as far as defending the French Revolution during a time when public opinion on the topic was not favorable. This was almost seen as calling for a revolution within a revolution, which eventually culminated with the Birmingham riots of 1791. Despite pleas from friends and family to tone down his rhetoric, during the throes of the American and French Revolution, Priestley remained resolved to his beliefs. A powder keg of anger erupted during a banquet which led to a mob of rioters confronting Priestley and other groups and eventually burning Priestley’s house, church and laboratory to the ground.

Upon arrival in America in 1794, Priestley and his family eventually settled in Northumberland Pennsylvania. Despite declining numerous vies for political endorsements, as to avoid political discord in America, Priestley staunchly continued his Unitarian beliefs. Settling into this quaint new community in Central Pennsylvania, Priestley was seemingly cut off from the rest of the world. Frustrated, Priestley was unable to keep up with emergent scientific discoveries in Europe, and was no longer able to maintain his status as a pioneer in science. Despite trying to continue his investigations with the help of the American philosophical Society, Priestley eventually focused on defending his theories until his death on February 6, 1804.

The house that the Priestley’s built upon their arrival in Northumberland still stands today. A surviving testament to Priestley’s legacy which was not fully realized or appreciated until after his death. Despite being a member of major scientific societies and praise for his discoveries, you will not find Priestley amongst scholarly household names. His works which were appreciated and lauded as groundbreaking at the time, were often overshadowed by his vehement defending of his theories and philosophical viewpoints.