Museum of the New Llano Colony

The New Llano Co-Operative Colony (1914-1937) was founded on the general principals of equal opportunities for all members. Colony propaganda encouraged a variety of social programs which, at the time, were absolutely unacceptable to big business, although today are considered standard. These included minimum wage, Social Security, low cost housing, welfare, women in the workplace, and universal health care.

New Llano colonists gathered on the hotel porch. Three meals were prepared for all the colonists in the hotel each day. 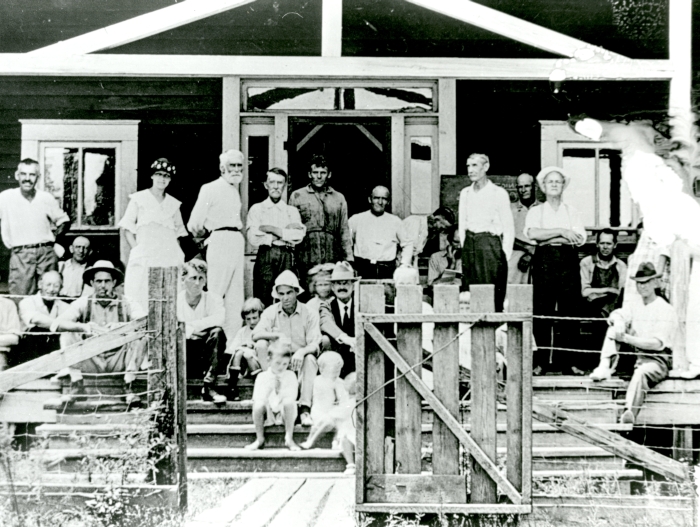 Logo used by the New Llano Colony. This logo was to be placed on every item produced by the colony. 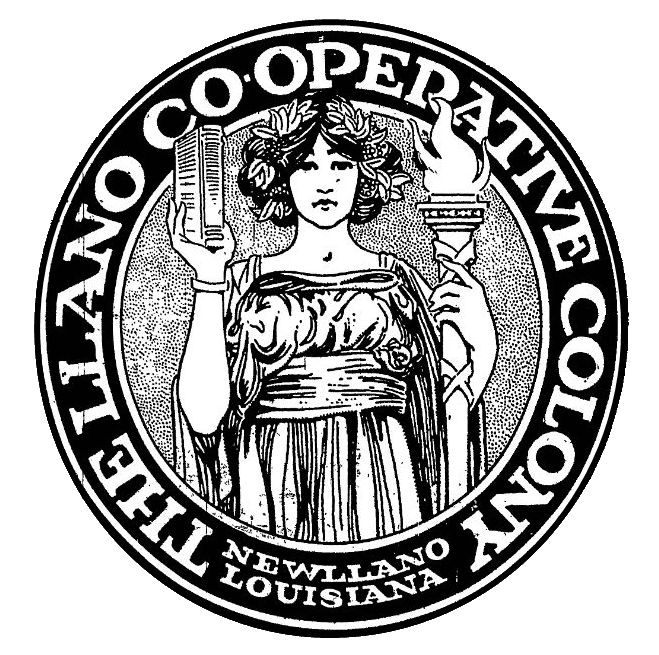 As the U.S. entered the 20th century, men were leaving the farms -- going to the big cities where they could find work. Usually, they discovered deplorable working conditions which they were forced to accept, having cut all ties with the farms they'd left behind. The power of the capitalist class grew enormously. Their giant monopolies and trusts came to dominate whole branches of industry.

Unhappy workers began to organize labor unions and demand better treatment for the workers. The Socialist Party was created and sent speakers throughout the country to promote their ideals -- things like old age pensions, health care, minimum wages, equal rights for women and child labor laws. Job Harriman, a successful Labor lawyer in Los Angeles, CA, became popular throughout the country for his Socialist lectures.

In 1914, Harriman decided that Socialist politics alone weren't going to change the world. He felt that men would be more likely to join the Socialist movement if he could show them a working example of a co-operative lifestyle. He established the Llano del Rio Co-operative Colony in the Antelope Valley, near Los Angeles, California. Growth was so rapid that within three years, it became obvious they didn’t have enough water for so many people. They purchased 20,000 acres in the highlands of western Louisiana and approximately 200 colonists made the move in November of 1917…