Named after West Virginia's first governor, Arthur Boreman, Fort Boreman is a Civil War fortification located with an impressive view of the confluence of the Ohio and Little Kanawha Rivers in Parkersburg. The site is thought to have been a settlement or burial ground of prehistoric Indians long before European colonization, but the first recorded owner of the land was Francis Beckwith in 1820, and the property provided the lumber used to build Wood County's first court house. In 1863, Union troops built the fort from which the park now takes its name, since the ridge offered the most commanding overlook of the crucial transportation hub and was well situated to protect the B&O Railroad from Confederate raids. The site saw sporadic private use after the Civil War, but generally experienced a decline from the 1940s until 2006, when Wood County reconstructed the present fort for use as a historic park.

The view of the Ohio River from atop Fort Boreman, which was situated to take advantage of the ridge's commanding heights. In the foreground are recreated breastworks from the Union fort. 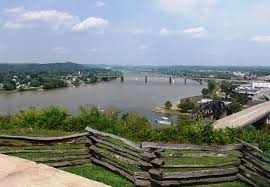 Entrance into Fort Boreman Park. Now owned and operated by Wood County, the land was overrun by plant growth and saw little use until 2006 when the restoration began. 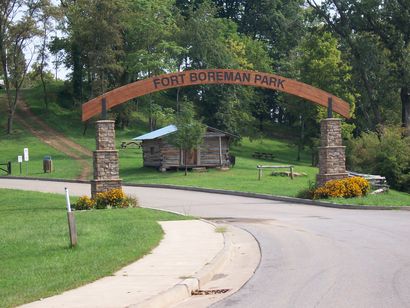 A general view of the park. 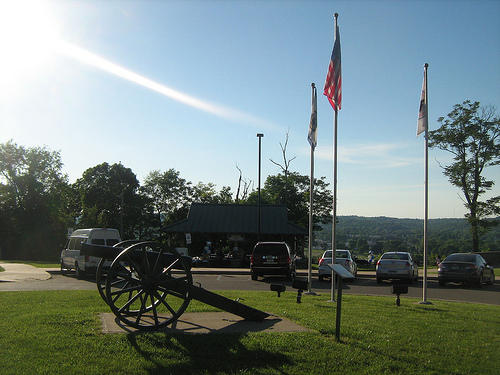 Colonel George Thom, U.S. Army Corps of Engineers, who ordered the construction of Fort Boreman. He was an aide to General Henry Halleck for much of the war and oversaw hundreds of engineering projects. 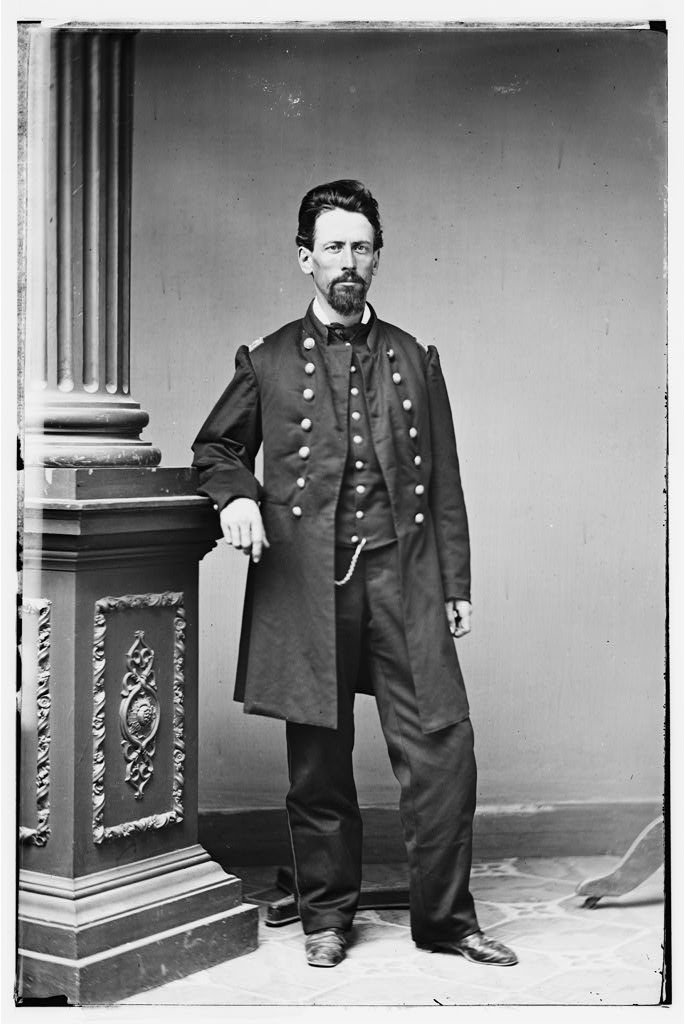 Arthur Boreman, first Governor of West Virginia, for whom the fort is named. 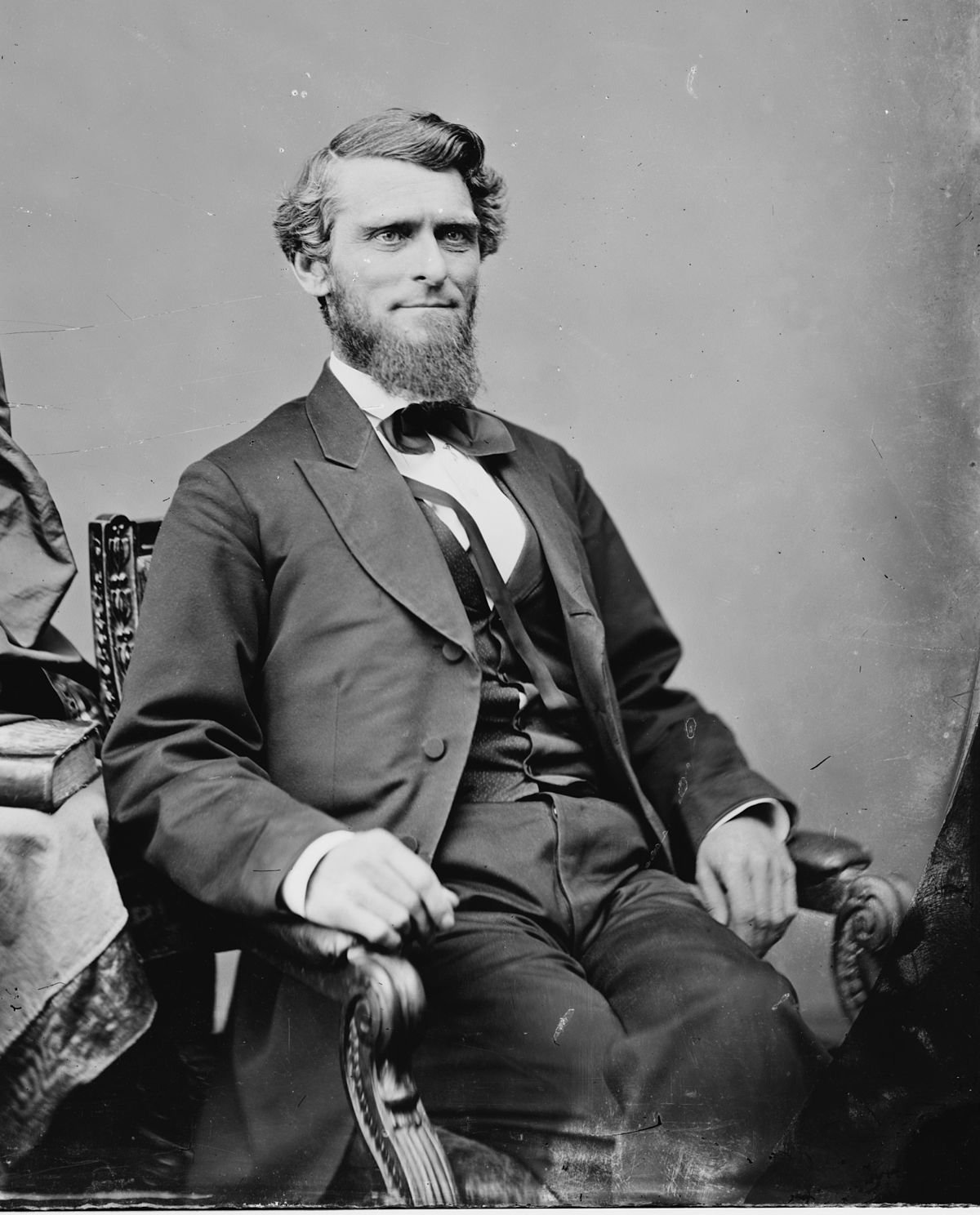 Fort Boreman's "Long Tom" Civil War cannon after its removal to City Park in 1921, where it still resides. Courtesy of ElectricEarl.com 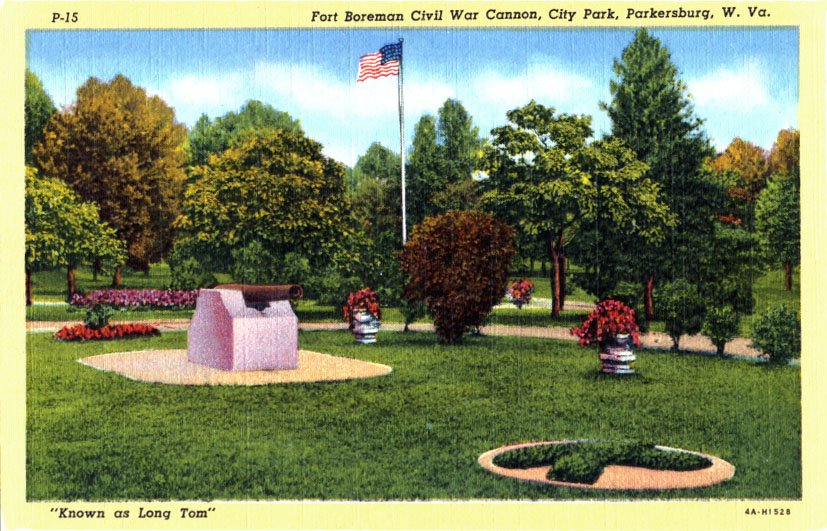 Though the high ridge that now contains Fort Boreman Park was a likely site for prehistoric settlement, and is long suspected to house an ancient Native American burial ground, its documented life began in 1820 with the land's purchase by Francis Beckwith. For reasons unknown, it is often referred to in this Antebellum period as “Mount Logan” (possibly for the famous Mingo chieftain).

By the time of the Civil War, the property had been inherited by Jonathan Beckwith. Since Beckwith’s loyalty to the Union was felt to be “dubious,” the land was seized and the 18th Ohio Infantry occupied the heights in May 1861, keeping an eye on riverine traffic, the nearby railroad, and main streets of Parkersburg itself from the overlook. It was a necessary measure, but hardly enough to deter attacks on the full length of the vital Baltimore & Ohio Railroad (B&O).

Confederate raids along the B&O in the first two years of the war by General Thomas “Stonewall” Jackson and others disrupted the 379-mile lifeline between Baltimore and the western theater of war. Union leaders eventually saw their mistake and moved to protect it: on March 19, 1863, Special Order No. 129 authorized Colonel George Thom, an engineer for the Union Army, to take steps necessary for the reduction of Confederate incursions. He eventually ordered the erection of 42 blockhouses for small garrisons along the railroad, as well as the construction of Fort Boreman. West Virginia became a state only a few months after Thom began his work, and Arthur Boreman was the new state’s first governor.

The fort that took shape was triangular, conformed to the topography of the hillside, and comprised of four-foot deep zig-zagging trenches. First occupied by the 11th West Virginia Infantry, it was later garrisoned by a rotating roster of artillery batteries with as many as five cannon until the end of the war. The artillery was never fired in anger--only at Fourth of July celebrations and to announce the arrival of local dignitaries.

Though returned to Jonathan Beckwith after the war, by late century the land saw unofficial use by Parkersburg citizens as a park. In 1898 an obsolete Civil War cannon, “Long Tom,” was placed at the park and fired for special occasions, but was removed in 1921 to Parkersburg City Park, where it now resides (the windows of too many Parkersburg residents had been shattered by the noise of the big gun). A civic organization called the Nemesis Temple purchased much of the property in 1927, and the site continued to be used for picnics, Masonic lodge gatherings, and Boy Scout activities into the 1940s.

The property went into decline during the latter half of the 20th Century, but renewed interest in 1997 eventually resulted in Wood County’s purchase of the plot in 2006, and the reconstruction of the present Fort Boreman Park. It was added to the National Register of Historic Places in 2003, and is recognized as an important representative of Civil War history and the importance of the railroads in the logistics of the conflict.