The Lewiston Museum is a small, local museum housed in a church built in 1835. Visitors learn about the role Lewiston played during its long history. When French and British traders arrived here in the 1600s, Lewiston became the first European settlement in Western New York. Before the Erie Canal was built, Lewiston was the place where traders portaged their goods from west to east, bypassing the Niagara Falls. The town served as the staging area from which the United States invaded (in a failed attempt) Canada during the War of 1812. Lastly, Lewiston was the final stop on the Underground Railroad. Community members were staunch abolitionists, including the church's first pastor, Rev. Rufus Murray, who hid escaping slaves in the church. Over the years it served a few denominations, the first being Episcopalians, then Lutherans, and finally, Baptists. The church was sold to the Historical Association of Lewiston in 1973 and it opened a year later after renovations were completed.

The Lewiston Museum is located in this historic church built in 1835. 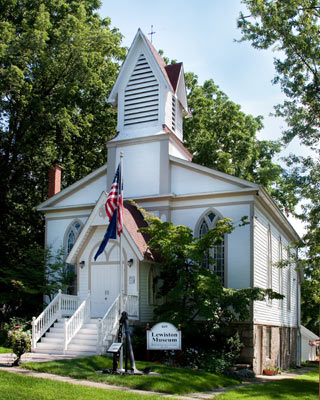 Wednesday through Sunday, 1pm to 5pm during June, July, and August or by appointment