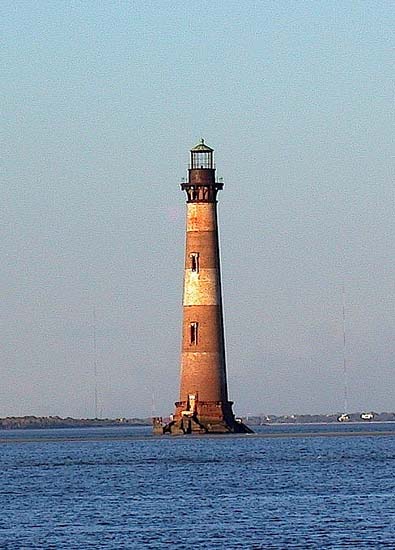 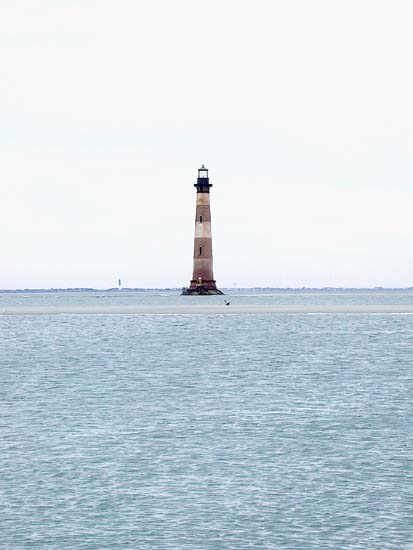 A lighthouse, in varying forms, has been at the Morris Island site since 1673. In its first form it was merely a raised metal pan, filled with pitch and set ablaze at night. The first true lighthouse, reaching a height of 42 feet, was constructed in 1767. In 1838 a new lighthouse was constructed with a revolving light reaching 102 feet in height. This lighthouse was destroyed in 1862 by Confederate forces in order to prevent Union capture. More than 160 lights on the southeastern shores of America were disabled or destroyed during the Civil War. The lighthouse, in its current form was erected in 1876. The light sustained major damage during the Charleston earthquake of 1886. The lens was broken and the structure was cracked in multiple places. This damage was repaired quickly as it did not affect the structural integrity of the lighthouse. The 1876 form of the lighthouse was built 1,200 feet from the shoreline but by 1938  changing ocean currents caused by man-made construction projects had caused it to become completely surrounded by water. This led to the lighthouse's decommissioning and abandonment in 1962. It was replaced with a new lighthouse on Sullivan's Island to the north of Follly Beach.

The current lighthouse is a conical shape standing 161 feet tall. It has a timber piling, concrete base and is constructed of dressed stone.

The lighthouse has been on the National Register of Historic Places since 1982.