The crash site of the famous Hindenburg Zeppelin is located in Lakehurst, New Jersey on an Air Force base that is still in use today. The Hindenburg was part of the Nazi fleet of Zeppelin's and the biggest of the fleet at 804 feet long. Since the Air Force base this historic event took place on is still an active base, you will need to call the Navy Lakehurst Historic Society 2 months in advance to be approved for a tour. Only U.S citizens will be approved for the tour. 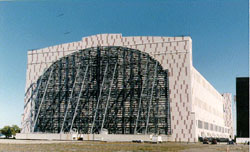 The first burst of flames on the Hindenburg that brought it down and started the catastrophe. 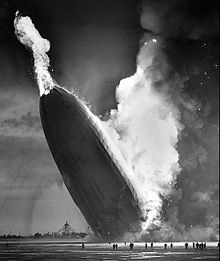 The wreckage left behind after the crash. 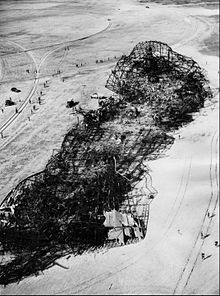 The memorial of the Hindenburg disaster, designated a Registered National Historic Landmark in 1968. It was dedicated on May 6, 1987, the 50th anniversary of the disaster. 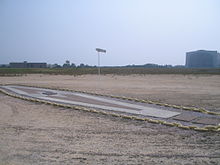 Hangar Number 1 was the location of the Hindenburg Zeppelin disaster in May of 1937.  Located in Lakehurst New Jersey, Lakehurst Naval Air Station was a popular base of operations for transatlantic flights from the United States to Germany.  Commissioned in 1921, Lakehurst Naval Air station became popular for its lighter than air flight experimentation and tests.  The United States government tested lighter than air aircraft for military and commercial purposes.
In 1937 the Hindenburg Zeppelin, pride of the Nazi fleet was on it's way from Germany to the Lakehurst Naval Air Station when the great aircraft burst into flames just before landing.  The Hindenburg's lighter than air attribute could be credited to it's composition of highly flammable Hydrogen gas.  This famous crash led to the end of the lighter than air travel age.
This naval air station continued lighter than air operations into the the 2nd World War.  Lighter than air ships were used by allied forces in World war II for observational and tactical purposes in efforts to turn the tide of the war.  Lakehurst New Jersey Naval Air Station can accessed by group tours.  Reservations and approvals should be obtained 2 months in advance.  Expect to see relics of the lighter than air age and hangars from a time past.
The disaster was well-documented because of the significant extent of newsreel coverage and photographs, as well as Herbert Morrison's eyewitness radio report for station WLS in Chicago, which was broadcast the next day. Morrison's broadcast remains one of the most famous in history. Parts of it were later dubbed onto newsreel footage, giving the impression that the words and film were recorded together. His plaintive "Oh, the humanity!" has been widely used in popular culture. Part of the poignancy of his commentary is the result of its having been recorded at a slightly slower speed, so that when it is played back at normal speed, it seems to have a faster delivery and higher pitch. When corrected for speed, Morrison's account sounds less frantic, though still impassioned.
The actual site of the Hindenburg crash at Naval Air Station Lakehurst is marked with a chain-outlined pad and bronze plaque where the airship's gondola landed.It was dedicated on May 6, 1987, the 50th anniversary of the disaster.Hangar No. 1, which still stands, is where the airship was to be housed after landing. It was designated a Registered National Historic Landmark in 1968. Pre-registered tours are held through the Navy Lakehurst Historical Society. Due to security concerns, no foreign nationals are permitted on the tours.
There are any theories about the cause of the crash including, sabotage, a lighting strike, a puncture, static spark, engine failure and one sabotage theory goes as far as to say that Hitler himself caused the crash in retaliation to one of the passengers anti-Nazi opinions.