In the early 1990s Congress unanimously approved legislation to create a monument to the "victims" of Communist regimes. Bill Clinton signed the building of the Victims of Communism Memorial into law and George W. Bush dedicated the monument accompanied by critics of Communist regimes around the world who had suffered as a result of their activism. The centerpiece of the memorial is the artist's rendition of the Goddess of Democracy. The monument received little criticism in the United States, but for many who lived in current of former Communist nations, the statue was a cultural extension of the Cold War. While acknowledging that many people suffered in nations that were ruled by leaders who claimed to support the goals of the Communism, these critics pointed out that many of Western leaders committed acts that caused suffering to people around the world in the name of fighting Communism. Chinese scholar Shi Yinhong believed that the statue's indirect reference to his nation was inappropriate and pointed out that his nation has not created monuments to the millions of people in the United States and beyond who have suffered under capitalism.

The Chinese Goddess of Democracy was chosen as the centerpiece for the memorial as a reference to the Tienanmen Square Massacre. 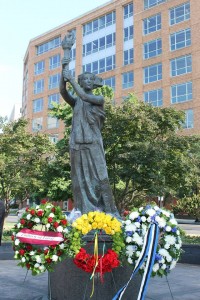 The plating on the statue reads "To the more than one hundred million victims of communism and to those who love liberty" and "To the freedom and independence of all captive nations and peoples." 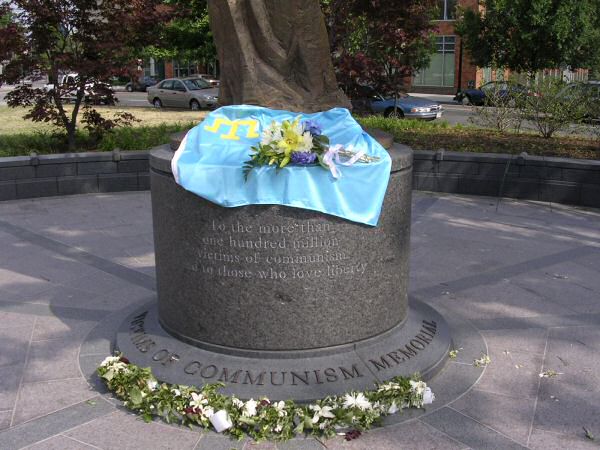 Support for a memorial for the many people who opposed Communist governments grew shortly after the fall of the Berlin Wall. During the Bush administration, this memorial and museum was established without federal funding. In 2007, 20 years after the famous Ronald Reagan speech to Gorbachev, President Bush dedicated the memorial. The dedication was not without controversy, and many people in and beyond the United States view the monument as a legacy of the Cold War.

Many of the congressional leaders who supported the movement of to create a monument to those who were victimized by Communist regimes hoped to establish a replica of the Berlin Wall. A replica of the Brandenburg Gate emerged as as a potential design in honor of Ronald Reagan's famous speech calling on Russia to tear down the Berlin Wall. Instead this artist's vision of the Goddess of Democracy was selected partly owing to its symbolic reference to anti-Communist protesters leading up to the Tienanmen Square Massacre.