The Harding Home is known as the residence of America’s 29th President- Warren G. and Florence Harding from 1891 to 1921. This is the place that he and his bride-to-be, Florence Kling DeWolfe, designed as a family home to live in after their impending marriage. The Harding Home was built on Mount Vernon Avenue and their wedding also be held in the front hallway of the house in 1891. The Harding home aided then Presidential candidate Harding to exemplify his platform of a “return to normalcy” after the turbulent WWI and the depression that accompanied it, by representing his middle class standing reflecting in the design of the home. The years in which Harding lived in this home are significant because they were his pre-politician years, and the home is symbolic of how he rose from a simple newspaperman to a politician on the national stage. The Harding Home has been opened continuously as a museum since 1926, three year after President Harding’s death because of heart attack in 1923. Come and visit The Harding Home - the journey of America’s 29th President. 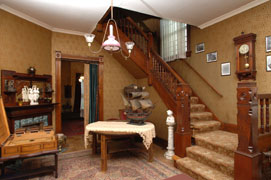 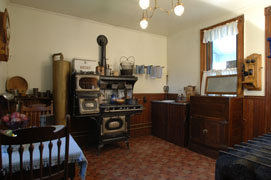 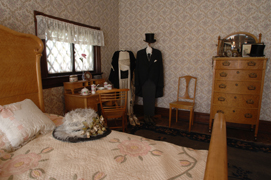 Outside The Harding Home 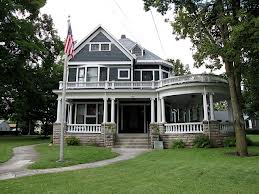 The Harding Presidential Home Site has two buildings, there is the Harding Home that is painted green and the Press House which is a white cottage. The first floor of the Harding Home contains a parlor, library, dining room, the front hall in which the couple wed as well as President Harding's office. Located on the second floor is the master bedroom, three additional bedrooms, including the maid's room, and a bathroom. All of the furnishings in the house are made of hearty oak wood. To keep the original integrity of the Presidential Home all of the rooms were kept in their original condition including all the furnishings owned by President Harding himself.

One of the most significant parts of the house is the wrap-around front porch where President Harding held his front porch campaign, and people would travel to his house to hear him speak. A unique feature of this home is how the built-in closets. Built-in closets were an unusual amenity to have during this time period. When President Harding passed away of a heart attack in 1923, the First Lady traveled back to Marion, Ohio, but did not live in the home she once shared with former President Harding.

Mrs. Harding passed away a little over a year later  in 1924 and willed the house with its belonging to the Harding Memorial Association. The association decided to open a few of the rooms to the public, before they donated it to the State of Ohio in 1978. The Ohio Historical Society is responsible for the preservation of the house, and many of the belongings of the Hardings' are still there today, in addition to the house on display to the public.

Behind the house is the white cottage that served as press headquarters in 1920 for President Harding. This is now operated as a museum with exhibits about Warren G. Harding and his wife, Florence. Furthermore, beside the Harding Home Tours, the Harding Memorial Association also offers outreach programs, school field trips and is open for a team of archaeologists to conduct their own history examinations.