Queen's Ridge Cemetery is the final resting place for a soldier who fought in the Civil War. Aaron W. Mainard (Maynard) was born and raised in the area that is now known as Wayne County, WV. Aaron was a soldier in the 45th Kentucky Mounted Infantry, Federal Army, until he became disabled by fever. He was born on February 14, 1846 in Wayne County WV and died on August 27, 1918 also in Wayne County. The cemetery is located on a ridge area in Wayne County (near the Lincoln/Logan/Wayne County lines - where they come together), known at the Queen's Ridge Cemetery. One of the best known landmarks is near is the Cabwaylingo State Park. WVCPA contributor Della Lilly instructs: "Take State Rt 10 south from Huntington to Logan to Atenville, make a right-hand turn onto Little Harts Creek Road and travel paved country roads and reach the cemetery." 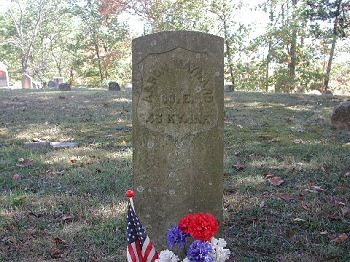 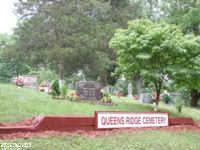 There is not a lot of information about the cemetery other than it's location and the fact that one of our brave military men, Aaron Mainard, along with many other veterans, have been placed there as their final resting place. Aaron fought during the Civil War and he also has family buried in the cemetery along with him. Also buried there are Veterans, as well as their descendants, of most all the wars. There is also a full-blood American Indian woman who is buried here along with her descendants. In all, there are about 250 graves.

In 2005, Argus Energy applied for a permit to deep-mine in the area where the cemetery is located and said that the cemetery was in its line of fire of where they wanted to do their mining. With the help of family and friends of the ones who are buried here, Argus Energy was denied their permit by the state and could not progress in their efforts.

There is also a small church building located on the grounds of the cemetery and each year on the first Sunday in June, a church service is held in the church. Many family members have picnic lunches either near the cemetery or at Cabwaylingo State Park afterwards. This church service has been held for several years and continues to be quite an event as people travel from many states just to attend.

The cemetery has local people and family members of the deceased who take care of it. It's fairly well maintained and one can find gravesites in the links provided in this article. It is open to the public. The cemetery is located on a ridge area in Wayne County near where the lines of Lincoln/Logan/Wayne County come together. For more information on gravesites and those who are buried here, please visit the link in this entry titled "findagrave.com"