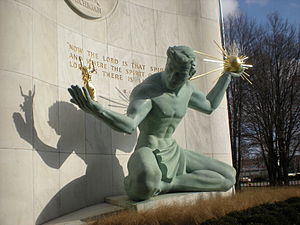 Spirit of Detroit in a Red Wings Jersey 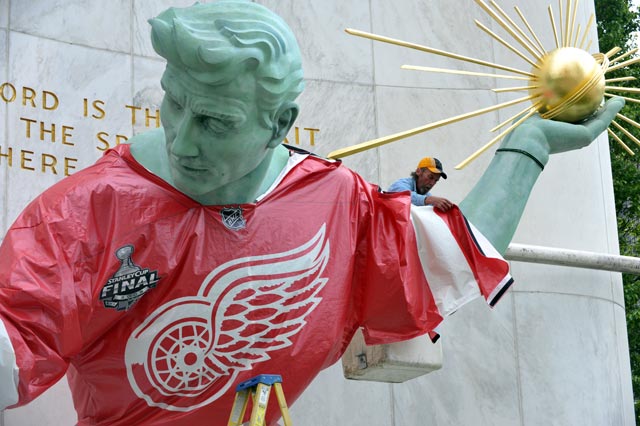 Spirit of Detroit with marble backdrop 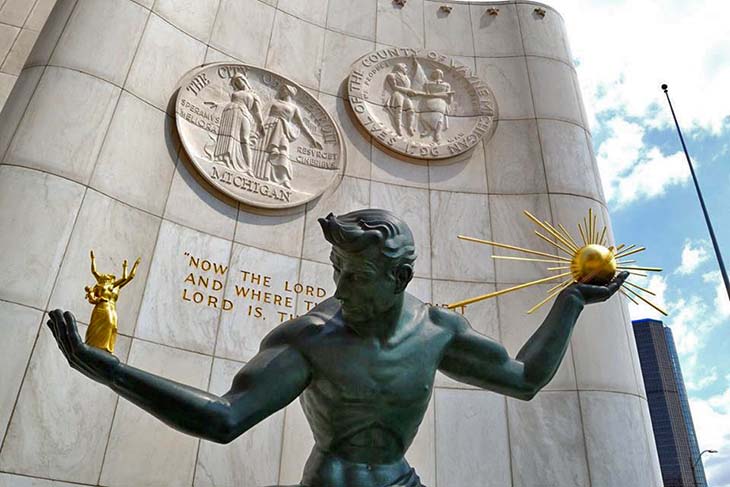 The Spirit of Detroit

In the late 1950s, the City of Detroit was in its heyday with the car industry, music scene, and other industries booming. When the new City County building was being constructed, Detroit’s (and Michigan’s) most famous sculptor, Marshall Fredericks, was commissioned to create an appropriate statue.

Fredericks designed the main seated figure of the statue to represent Man. In the left hand of the statue is a golden orb representing God, while in the right hand is a family group, including a mother, father, and child. In Frederick’s view, the inclusion of the family was to represent the noblest human relationship. In fact, the plaque on the statue reads, “Through the spirit of man is manifested in the family, the noblest human relationship.” The marble backdrop features the seals of the City of Detroit and Wayne County.1

As the statue rusted over the years, it took on a distinct green color, giving it the alias “Jolly Green Giant.” The statue has also been given a personification, such as on April 19, 1963, when two pranksters painted large green footprints leading from the statue to the “Passo di Danzo” statue nearby, which showcases a nude female ballet dancer. This prank hinted at the statue dating scene in downtown Detroit.

Additionally, the Spirit of Detroit statue donned a Red Wings jersey in celebration of the teams Stanley Cup win in 1997. It has since become tradition for the statue to wear the jersey whenever the Red Wings are victorious.2

Inscription on the Statue

The inscription on the symbol wall is from II Corinthians, 3:17 "Now the Lord is that spirit and where the spirit of the Lord is, there is liberty."

The sculpture by Marshall Fredericks was designed to continue the thought conveyed by the inscription and reflects in its conception the spirit underlying all human ideals - The relationship of God to Man.

The main figure represents the spirit of man. In his left hand he holds a symbol of God, and in his right hand, a family group: Father, mother, and child. The artist expresses the concept that God, through the spirit of man, is manifested in the family, the noblest human relationship.3